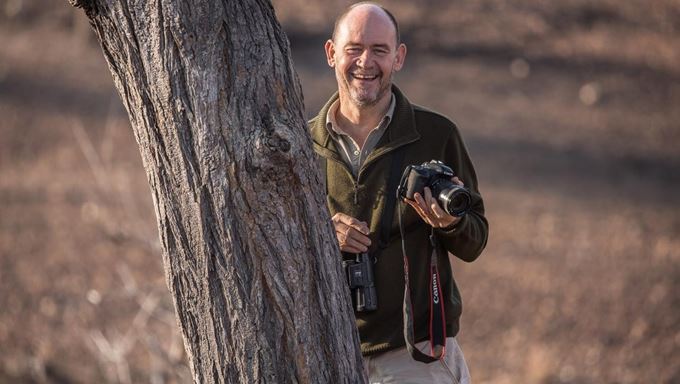 Travelling on safari with an expert private guide affords a multitude of benefits. For those seeking an outstanding and unique safari to Kenya and Tanzania, I wholeheartedly recommend spending time with Richard Knocker.

When you are accompanied by a private guide throughout your safari to Tanzania or Kenya, you are guaranteeing being led by a highly qualified and experienced expert allowing you to make the most of your time on safari. You have continuity; your guide gets to know you very well and knows what you are interested in, so can tailor the entire experience to your specific requirements. This, alongside knowing that you are in the very safest of hands, allows you to be more adventurous and venture off the beaten track with confidence.

Why take a privately guided safari with Richard Knocker?

I have known Richard for over 30 years and he is one of the most knowledgeable East African safari guides I’ve ever had the pleasure of travelling on safari with. Kenyan by birth, he now lives with his wife, Jules, in Tanzania.

Typical of somebody at the top of his game, Richard is unassuming, softly spoken, gentle, yet 100% attentive. He opens up his world to you, delighting in sharing every facet of his vast knowledge bank, in accordance with your own interests. 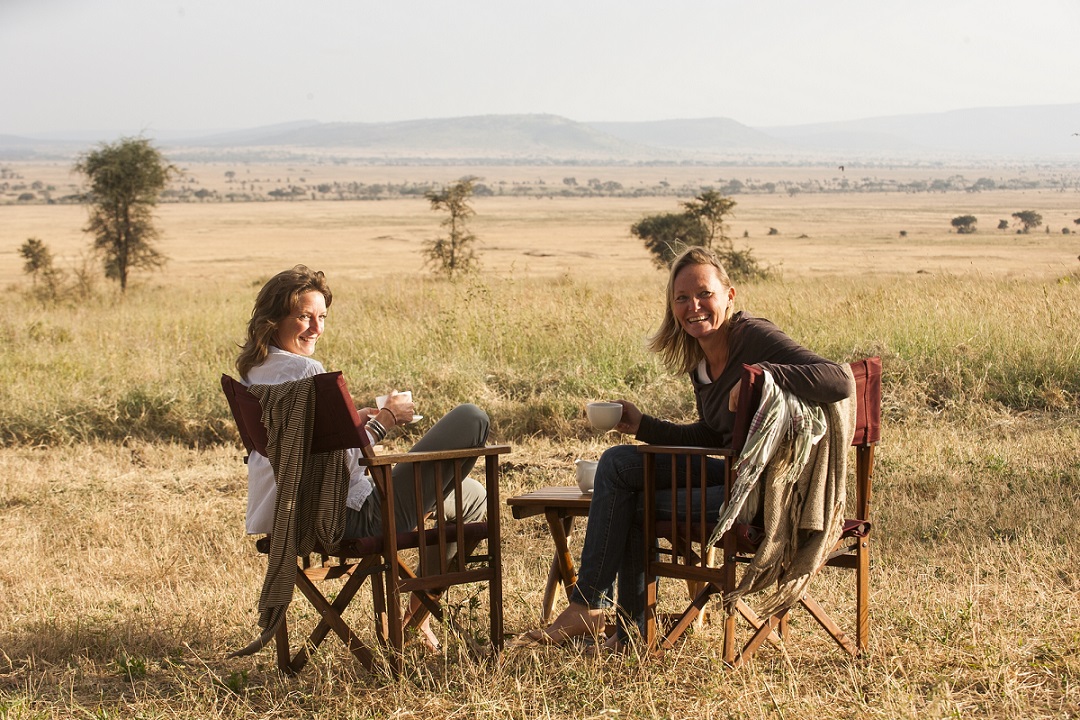 He knows all the best spots to place a private, mobile tented camp, purely for your party, affording you space, exclusivity, privacy and flexibility. Every time somebody travels with Richard, the feedback is always brilliant; they are always ecstatic and cannot wait to return on another journey with him!

My own experience on safari with Richard was fantastic; we were in Nairobi National Park and went out for a bird walk. Richard did a call through the area for this incredibly rare and very beautiful bird, the Narina trogon, and asked us to wait quietly. Our patience was rewarded when two trogons flew down to the lower branches of a tree to display their brightly coloured plumage!

Where can you travel on safari to Africa with Richard Knocker?

I suggest an exciting and varied itinerary below, privately guided by Richard Knocker, starting with the Great Migration and exploring the Ngorongoro Crater, Empakaii Crater and Ol Doinyo Lengai, before finishing off at luxury beach villa if you wish.

Northern Tanzania is home to Africa’s greatest wildlife phenomenon – the wildebeest migration – where 1.5 million wildebeest and 500 000 zebra converge in search of new grass and to calve, with a plethora of predators following in their wake. 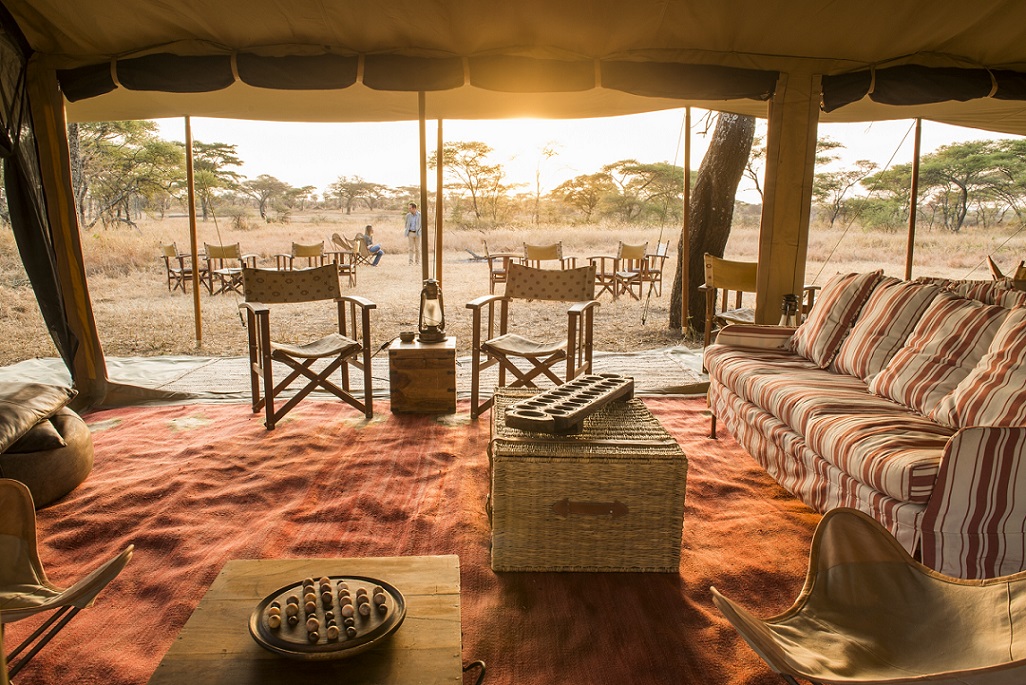 The best way to experience this is to stay in a private, luxury mobile tented camp where you can witness this miracle of life, observe the drama unfolding before you, immerse yourself in their daily life with all its challenges. You could also stay in a luxury lodge if you would prefer.

Move amongst the migration with Richard, hearing the reverberations of the young calling for their mothers, and the mothers’ reassuring response alerting them to her whereabouts. You will marvel at their quest for survival as they face the unrelenting dangers of predators who prey en masse to satisfy their hunger. 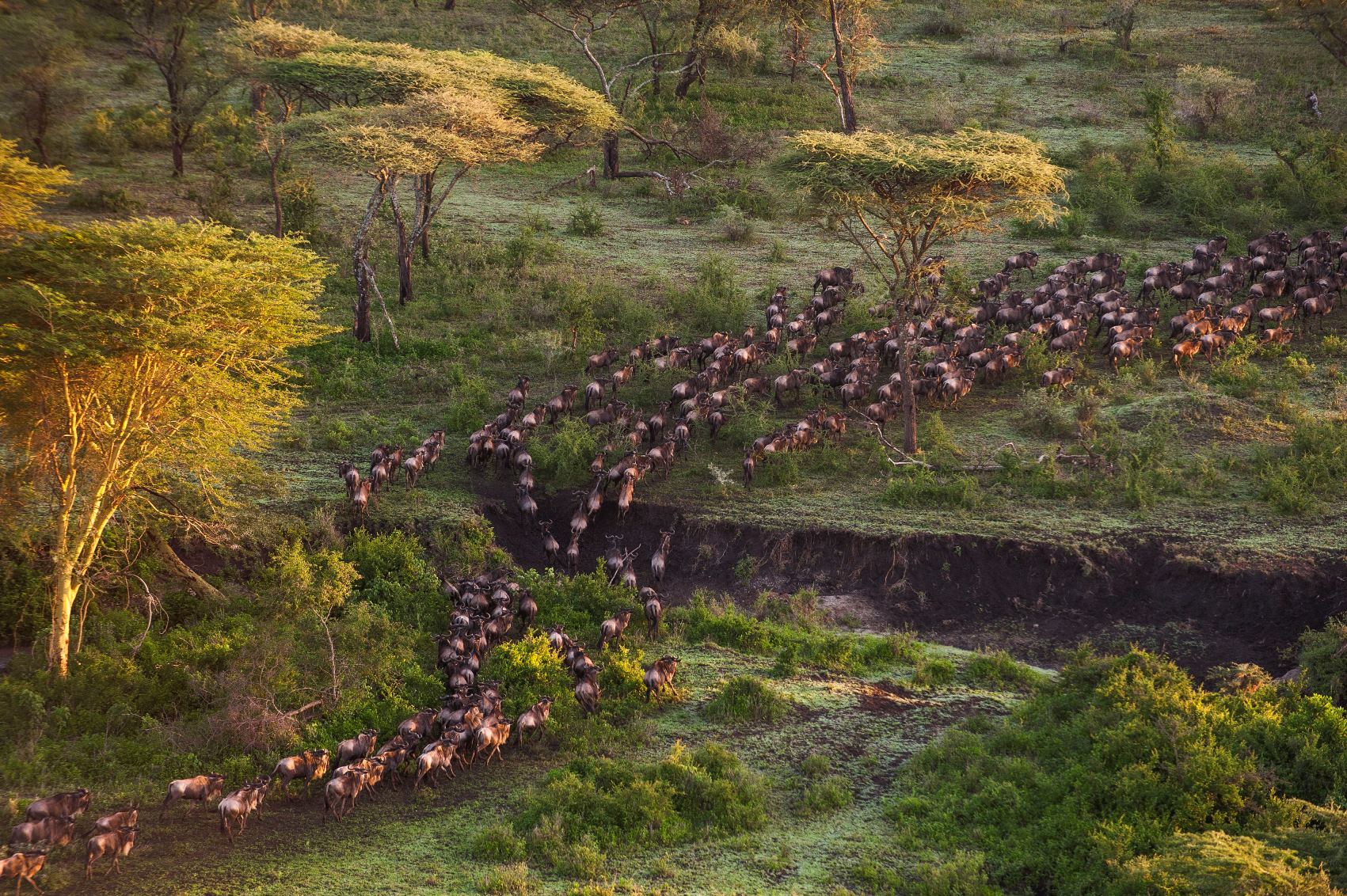 This is the iconic wildebeest migration, which takes place in northern Tanzania in the southern part of the Serengeti between December and March as well as in June in the western corridor of the Serengeti.

I believe that this region warrants at least a week, split between the Mwiba concession and Nameri. Nameri used to be home to scientists doing research on cheetahs and was an area closed to the public for 20 years. It is a haven for wildlife and happily there is a wonderful, luxury tented camp in this area. Here you will be away from the crowds, in a private concession, where you can witness this extraordinary experience both from a vehicle as well as on foot. 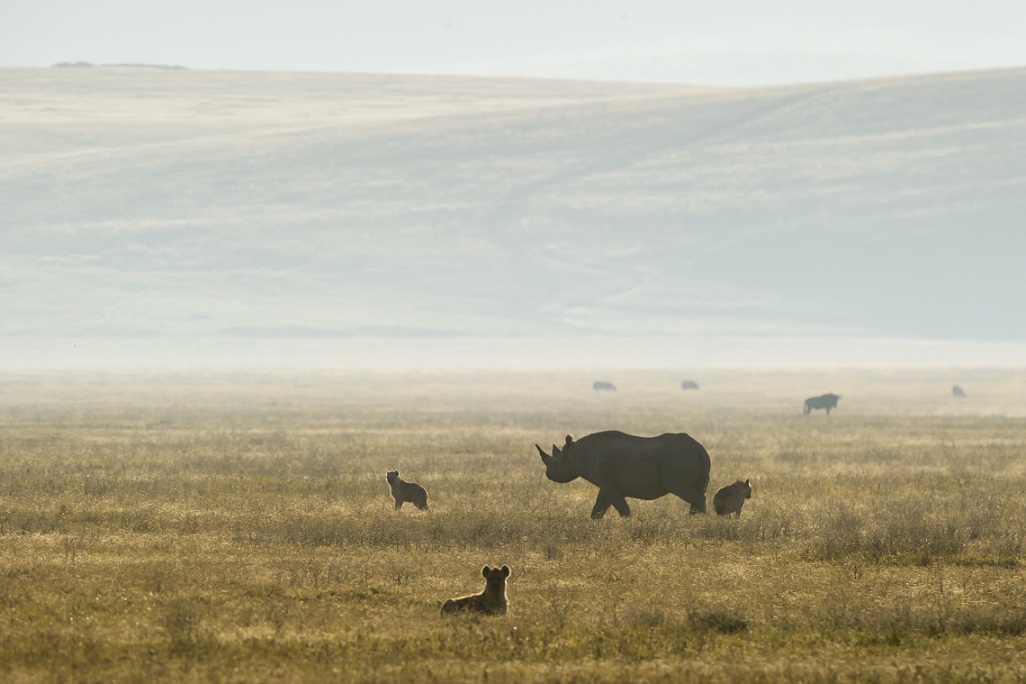 Ol Doinyo Lengai is an enormous active volcano whose lava moves incredibly quickly. Here you will enjoy the most dramatic glass of champagne you’re likely to have in your life on the volcano’s rim. After your exhilarating bubbly at the Mountain of God, head to a more relaxing volcano. Land at

Empakaai Crater, where the caldera is filled with a peaceful lake fringed with tropical forests and brimming with wildlife, including flocks of flamingos that inhabit its shallow waters. With this breath-taking scenery and only the birds as your dining companions, you’ll have one of the most serene lunches imaginable. 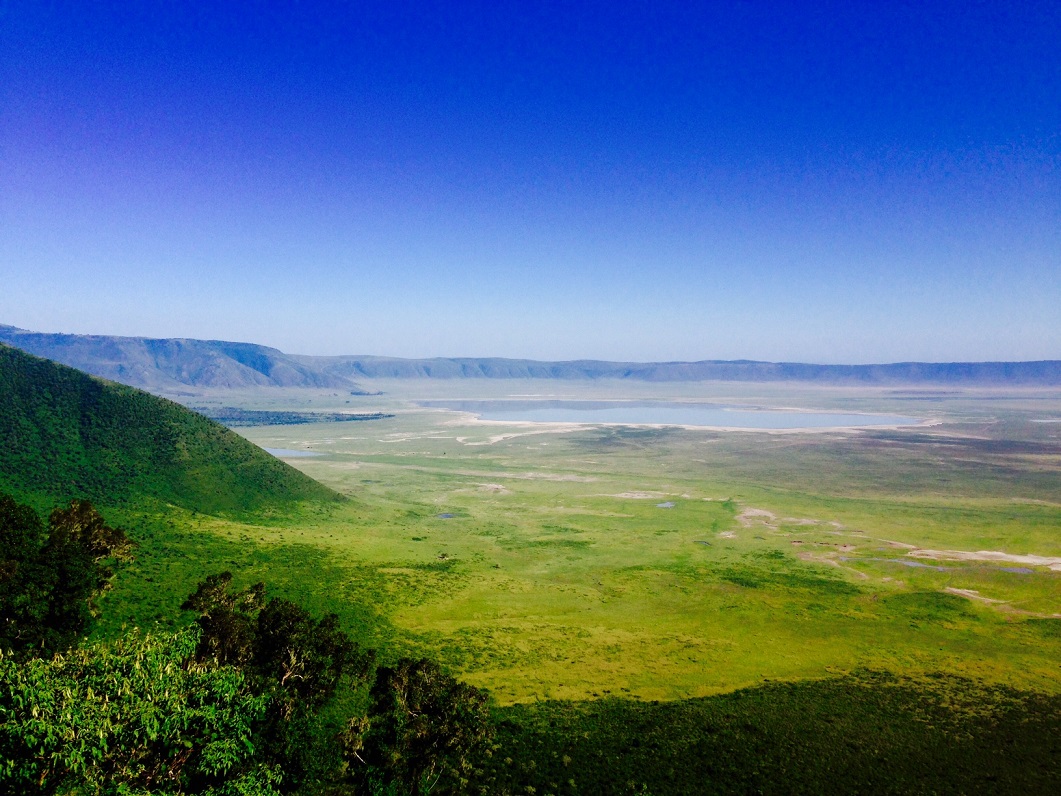 Otherwise, if that sounds too adventurous, you could instead embark on an Ngorongoro helicopter tour where you will fly for around 45 minutes over the Ngorongoro and Empakaai Craters.

You’ll discover the natural beauty of the Ngorongoro Conservation Area as your air-conditioned helicopter flies over the Ngorongoro landscape, passing over Ngorongoro archaeological sites, waterfalls and the Crater itself, en route.

Ngorongoro Crater is a spectacular sight from the air. It is a natural amphitheatre surrounded by steep walls rising over 600 metres from the crater floor. During the flight, you can listen to a recorded commentary about Ngorongoro Conservation Area and its surroundings via audio headphones.

Finish off in luxury at Chem Chem in the corridor of Lake Manyara and Tarangire, where you can simply walk and spend time relaxing amongst the most stunning scenery, whilst watching giraffe and zebra and other antelope making their way to the lake. Or experience the thrill of a bush walk with a Maasai warrior.

Visit a local community on a heart-touching cultural tour where you can make a difference in the lives of others. You will sense it in the stillness of a lakeside sundowner that eases you into a bushveld night of a million stars. The perfect end to a spectacular safari.

Whatever you choose to do, Richard will transform your safari from the ordinary to the extraordinary as he reveals his knowledge and world to you! 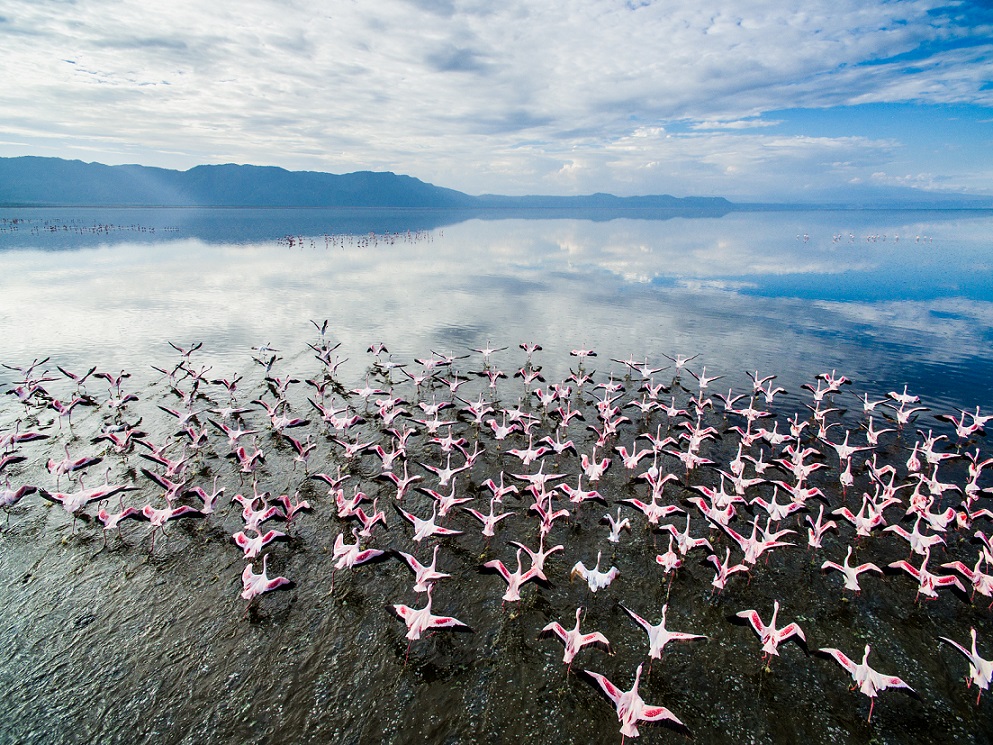 Richard was born on a farm in Kenya in 1963 and from his earliest years, has been going on safari. A stint in the UK to complete his education at Edinburgh University, studying French and Business, was followed by six years in Turkey, where initially he taught English and translation at Marmara University in Istanbul.

Thereafter, he joined a top American adventure travel company, leading trips and expeditions throughout Turkey – sailing and cultural /archaeological trips along the Aegean coast to walks in the Kackar Mountains. The first Gulf War had a devastating effect on tourism in Turkey, so Richard and his wife, Jules, moved back to Kenya to run a camp on the edge of the Maasai Mara.

The pull of some of Africa’s greatest wilderness areas soon brought them to Tanzania and from 1994 they set up and managed camps in Tarangire and the Serengeti for Ker and Downey. In 1996, they moved to Kusini Camp, on the western edge of the Serengeti Plains, which became their home for nearly three years. It was here that Richard gained much of his knowledge and experience of the Serengeti and introduced his trademark walking trips in the surrounding areas. 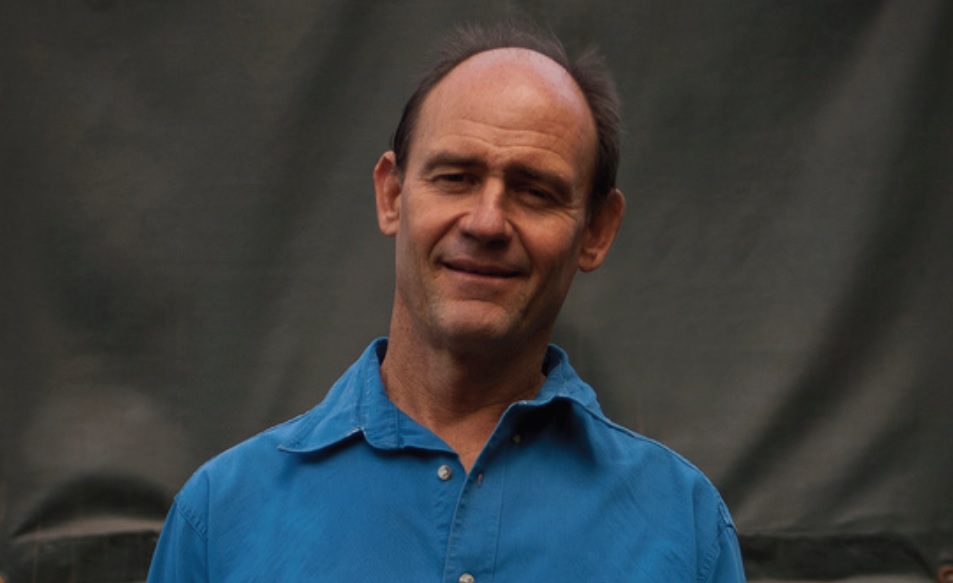 In 1999, Richard decided to pull away from camp management and concentrate on full time guiding. He joined Nomad Safari Guides and was a driving force behind their efforts to develop new safari ideas in exciting destinations, as well as helping mold a new generation of motivated guides through his involvement in the company’s guide training programme.

He also spearheads their community conservation efforts in northern Tanzania, as well as engaging in conservation issues at all levels. And of course, he continues with his guiding on a freelance basis. In May 2011, he achieved his Gold Accreditation for the Kenya Professional Safari Guides Association.

His passion for the bush life remains undimmed and he revels in the opportunity to introduce like-minded enthusiasts to the joys of the African wilderness. He is endlessly fascinated by the whole spectrum of the wonderful show that Nature lays on for us. 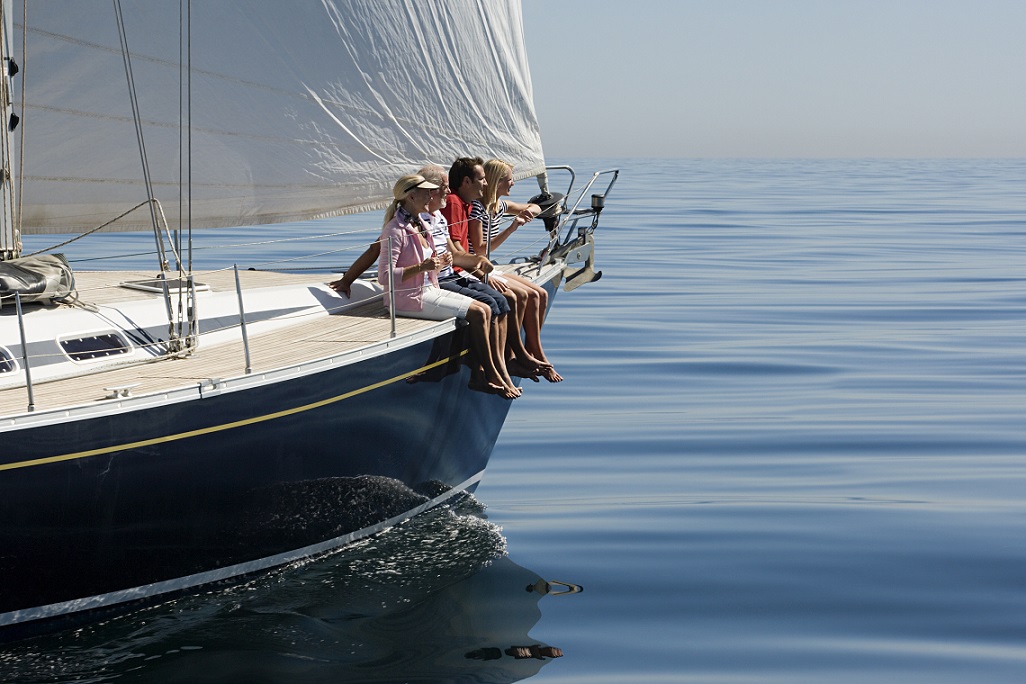 How could you extend your luxury African safari?

I haven’t even spoken of the coast yet, with its pristine, white-sand beaches. Here you could end your private safari with a short stay taking in the ocean by chartering a private catamaran yacht to sail around the islands, going scuba diving or fishing or swimming with dolphins or amongst whale sharks.

Perhaps you might prefer to hire a private villa off Mafia Island, on Thanda where again, in season, you can swim amongst the magnificent whale sharks. There are some truly lovely places to stay on the African coastline which is away from the well-trodden tourist trail.

Another of my favourite islands is Pemba, where time stands still. Have a glimpse of Africa which could have been fifty years ago, watching the fishermen mend their nets and dhows.

The benefits of a privately guided safari are legion and I would be delighted to discuss them further with you; please do feel free to contact me directly or at The Explorations Company for more information. 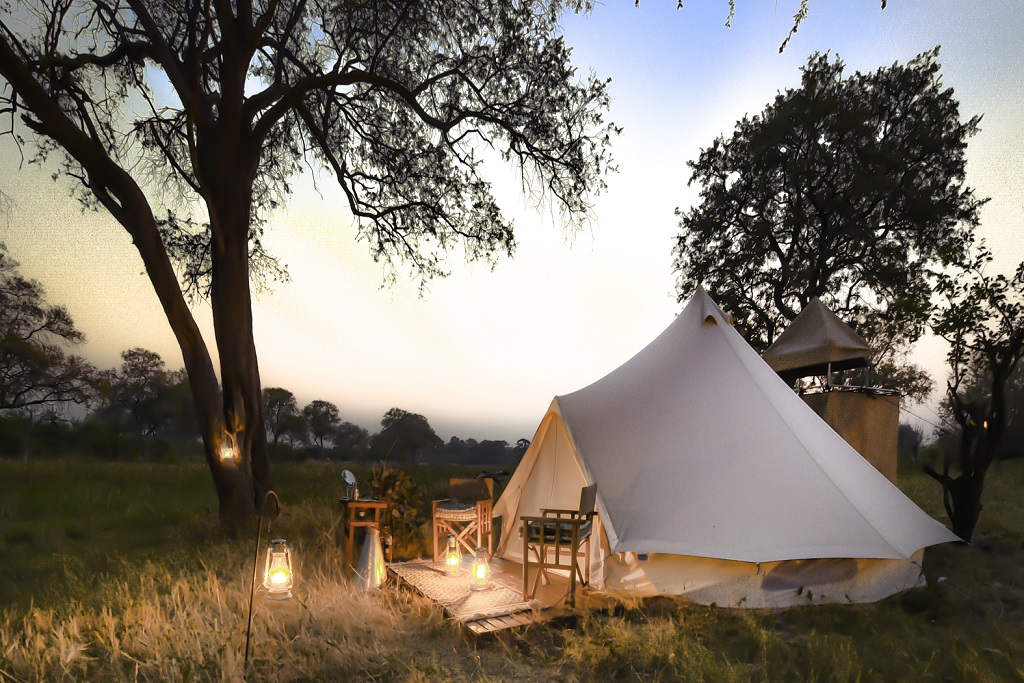 Where are the best private luxury mobile tented safaris and holidays?

A luxury, mobile, private safari is, in my opinion, unsurpassed in terms of capturing the true adventure and spirit of the original safaris taken by Hemingway and Finch-Hatton in the early 20th century. 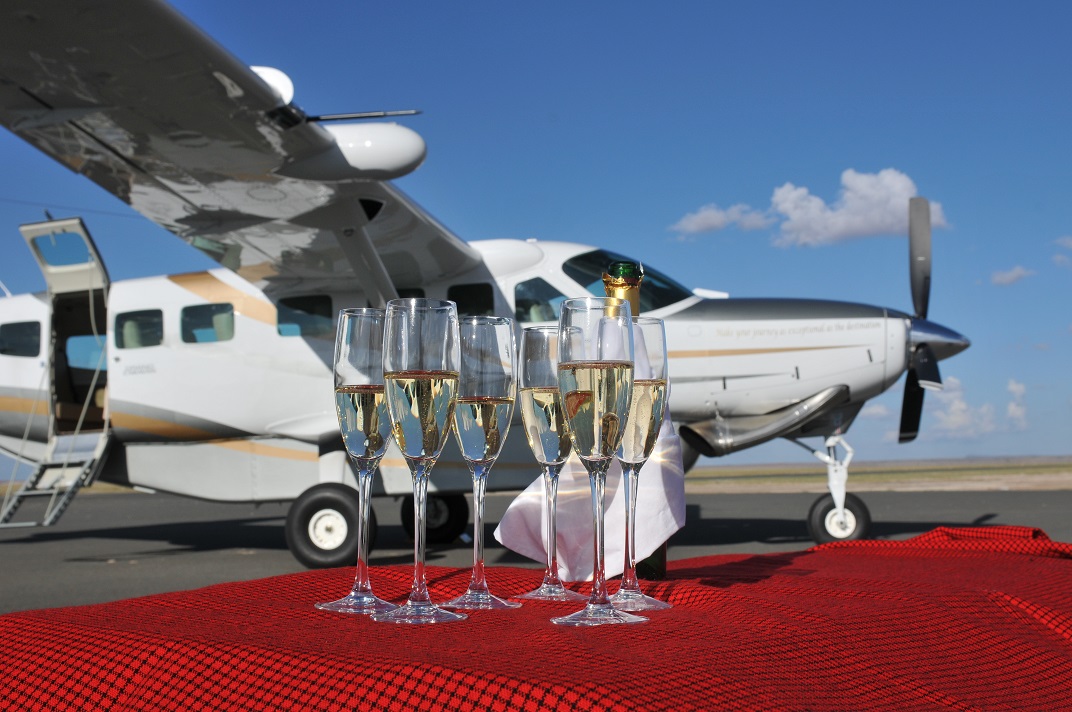 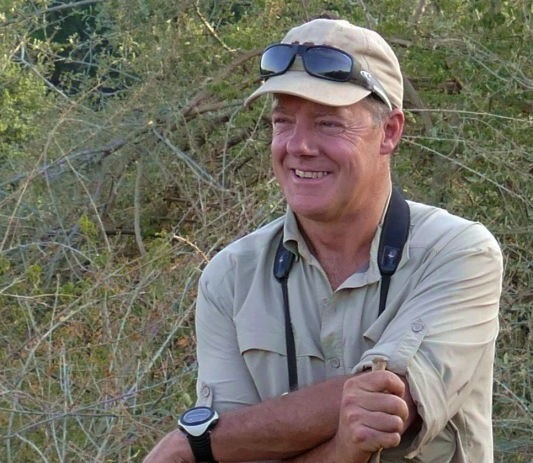