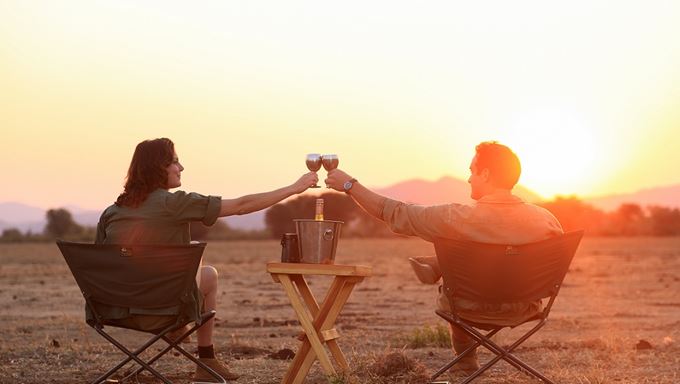 Many walking safaris in Zambia, especially in the South Luangwa, are conducted by walking between tented camps and spending a night or two in mobile fly camps en route. These are simpler than staying in a permanent camp and it is good to either start with a few nights in one of the latter and then end in a bit of luxury, washing off the sand before one returns home or continues the safari.

I believe this is one of the ultimate ‘back to nature’ experiences one can have in Africa and implore everyone to try it at least one!

Where are the best mobile safari camps in the Lower Zambezi?

Whilst mobile fly camping is popular and well-known in the South Luangwa, there are two in other parks in Zambia that are less-visited but no less spectacular.

The first lies in the Lower Zambezi, personally my favourite park in Zambia. Why? Well, it’s the light! Sounds unusual, but the contrast in colours of pastel albida forest, purple Zambezi Escarpment and blue waters of the mighty Zambezi River flowing by sets a beautiful scene dotted with phenomenal wildlife viewing. Herds of elephant cool off in the river eating the grasses, kudu and antelope move through the forests and leopard slink past.

Luke Evans and Kyle Branch offer some fantastic walking and canoeing safaris here which move between two small fly camps, Kutali Camp on Kulefu Island and Chula Camp (meaning ‘frog’ in the local language) on the Katengahumba (Discovery) Island. A third camp will be added to their repertoire in 2020 which will be called Tafara Springs, to be located in the Rufunsa Valley at the foot of the escarpment. 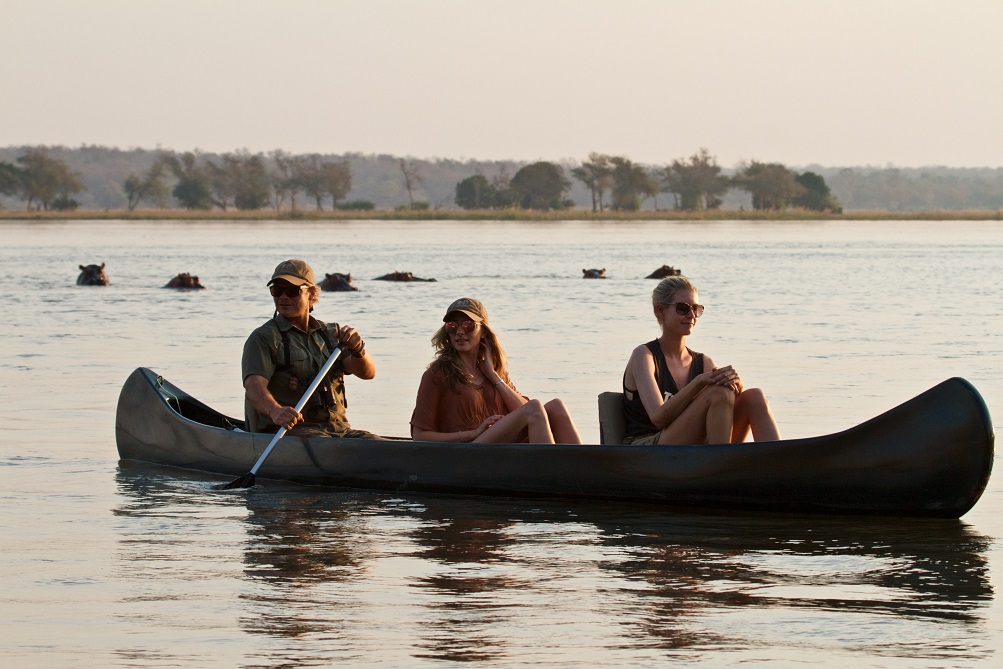 This little series of personal fly camps appeal to me is because they are owner run. Seasoned safari-goers will all agree that owner-run means attention to detail and the benefit of having the owners on site making sure you are having the best experience!

The guiding on these safaris are of an excellent standard and the sites of the camps have been very well thought-out to ensure that they have good access to wildlife, the game routes have been considered, the best angle for sunset and sunrise has been thought about and many other essential factors to ensure that one’s safari is extraordinary! 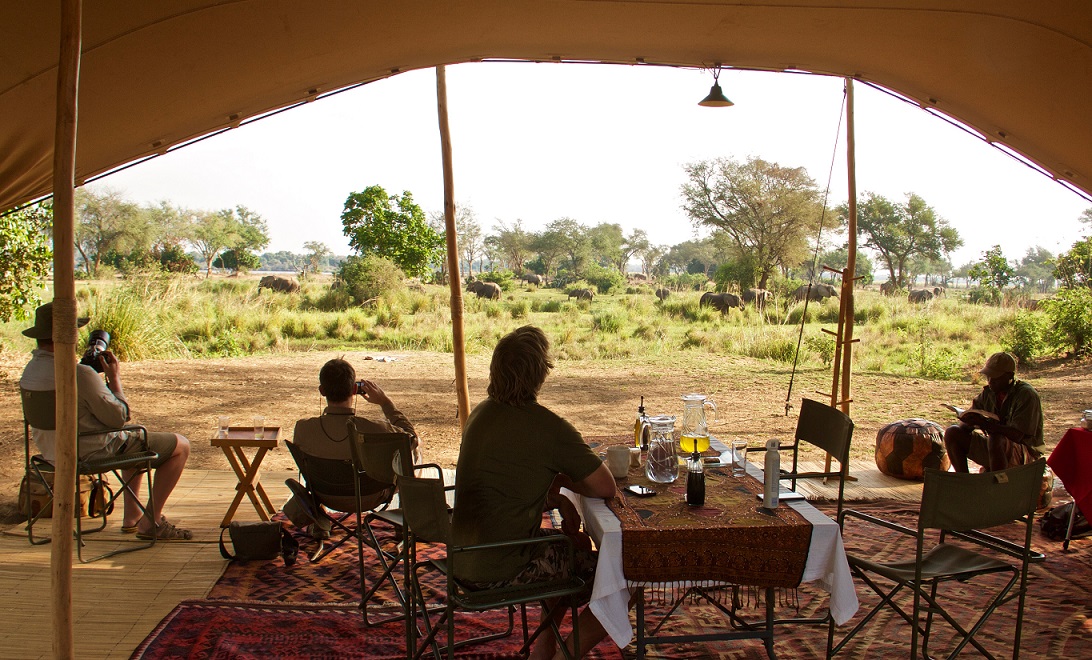 Luke and Kyle have extensive experience in Zambia and the Lower Zambezi National Park and they like to make your stay about the park, the wildlife and, the reason you are here, experiencing a part of Africa that is simply gorgeous, immersive and breath-taking.

What can I expect from a mobile walking safari in the Lower Zambezi?

Each camp is small with only four tents per camp, so numbers are limited and if you wished it could be taken exclusively as a family or group of friends. The camps are comfortable and even have flush loos! 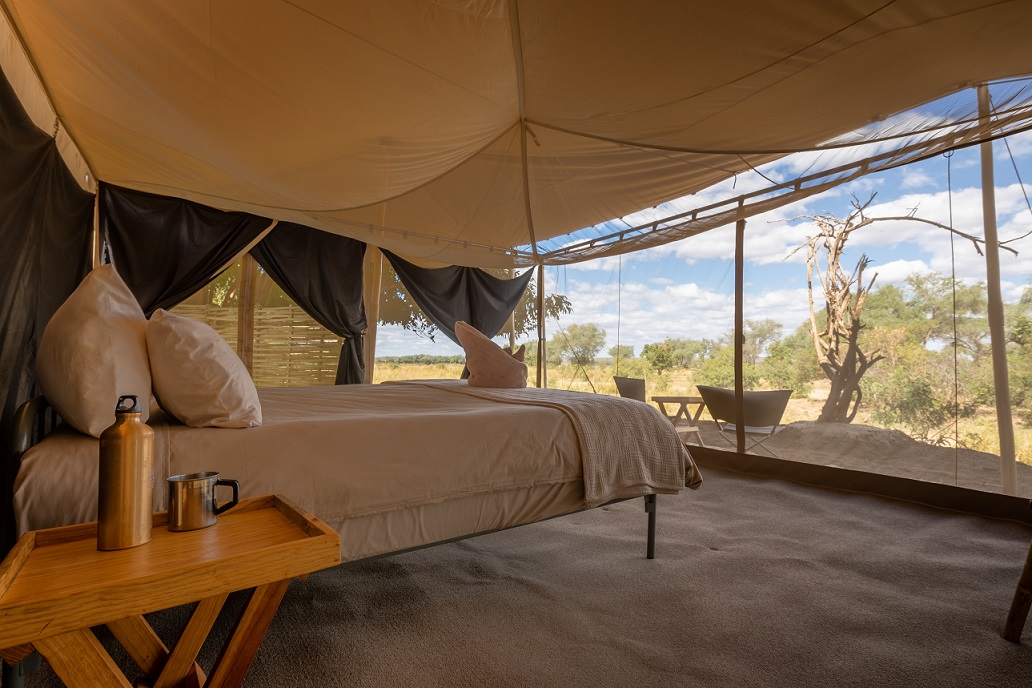 Like the walking safaris of the north, here you explore each day on foot (or by vehicle if you prefer) and also canoe and boat. It’s not a route march, it is about taking one’s time, smelling scents on the early morning mists, seeing all the minute details of the plants and the insects going about their work and also the wildlife coming down to the river.

Perhaps as the diurnal animals wake up you may spot some nocturnal ones heading off to spend the day sleeping.  Saying that I have seen more leopard during the day in the park than on a night drive! 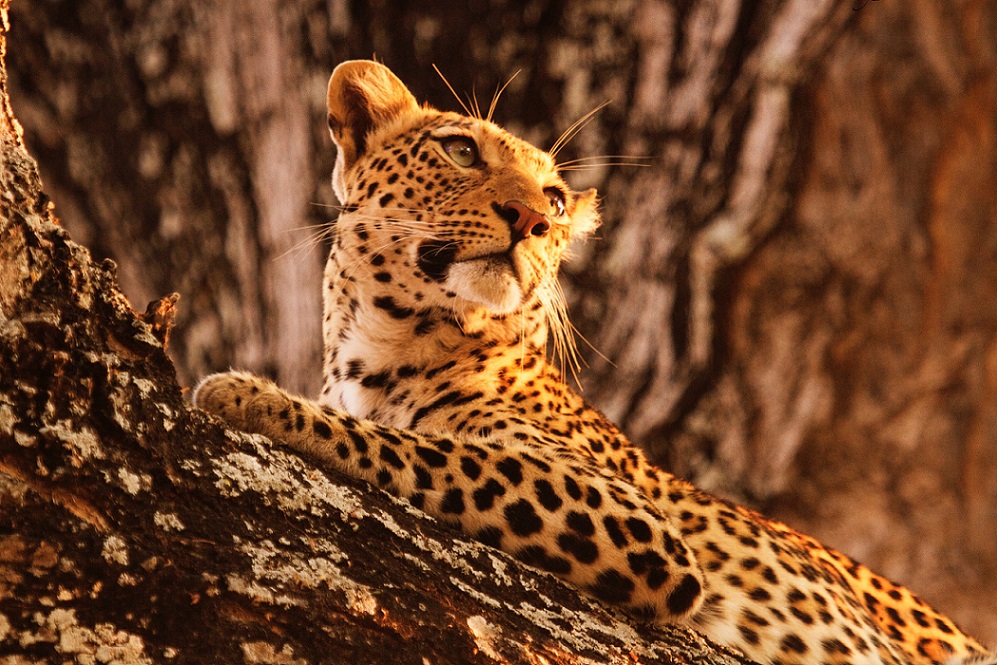 Once I witnessed a standoff between a troop of baboon who clearly had the huge advantage of numbers (and the male baboon’s teeth) against a young leopard on the ground in a dire situation. Though the leopard was young it outsmarted the baboon by feigning injury and kept entirely still - in fact we thought it was dead.

But after 40 minutes the baboons sauntered off feeling very smug and the leopard sensed a change and leapt from the ground, onto his feet and up the nearest huge tree. Clever leopard! After all that excitement I thought the day couldn’t get better but was astounded to see an e we then watched a leopard and porcupine encounter. Leopard – 0 / Porcupine (minus a few quills) – 1! 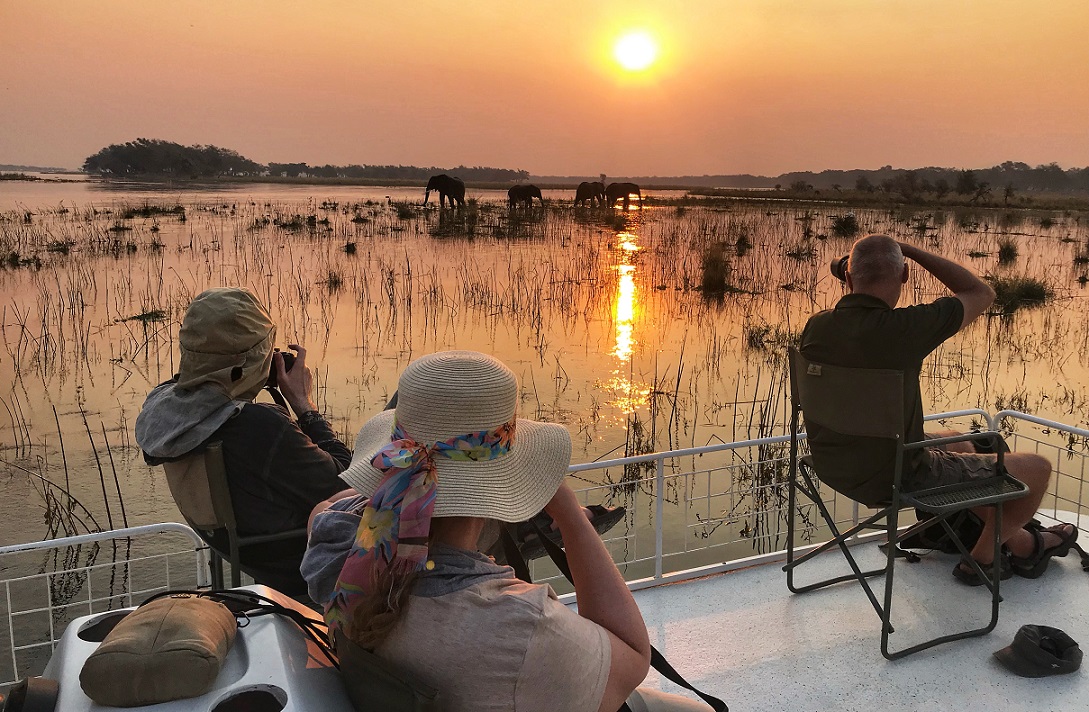 I also love the access to Chula Camp; it is very remote and one can only reach it by boat. The Zambezi dominates the landscape and is simply magnificent. There are huge crocodiles here too and pods of snorting hippo!

Mobile tented safaris in the remote and glorious Liuwa Plains

Another mobile safari camp that should certainly be considered is placed in possibly the most far-flung park in Zambia – Liuwa Plains. If you love wildlife and haven’t been yet - why not??

In 2008 African Parks, a non-profit conservation organisation, began work in this park which has about 12,500 people legally living within the park. Before their arrival the numbers of wildlife were falling dramatically, but with African Parks’ management and advice, the park and its wildlife are turning a corner.

This park is home to the second largest wildebeest migration in Africa (eclipsed only by the Great Migration of the Maasai Mara–Serengeti ecosystem). I saw part of the migration on my last visit, which was extraordinary with a mass of animals grazing on their slow move south towards the greener grasses. 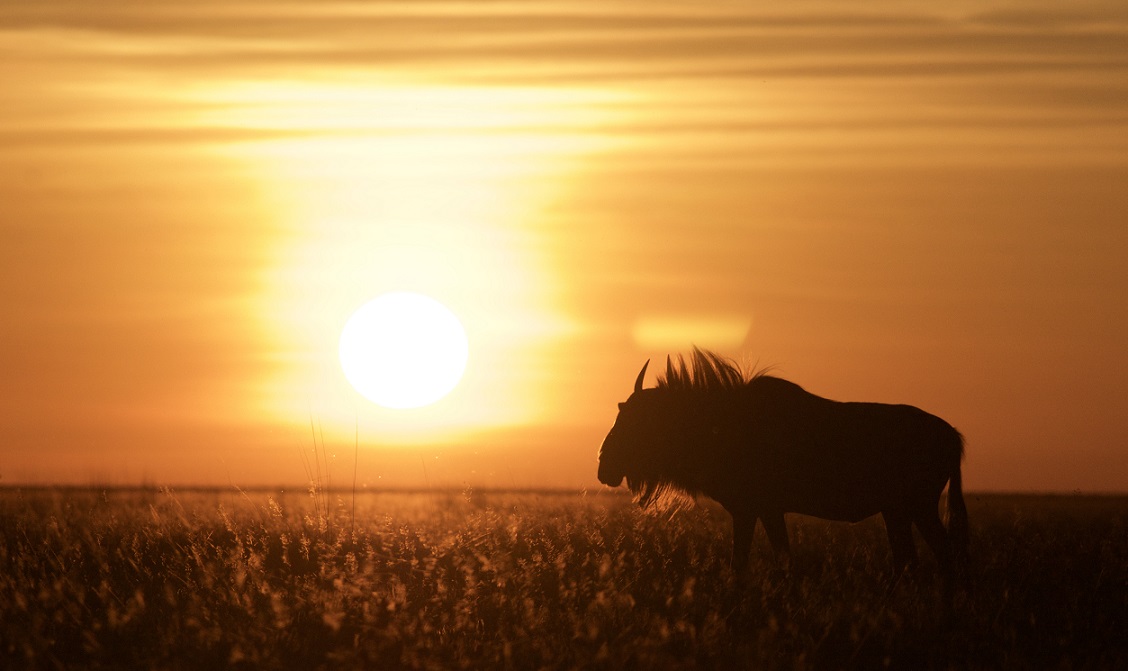 We were visiting during the wildebeest calving time (between October and December) and one day we stopped during our game drive for an hour just to sit and watch. As the mothers’ contractions started, many words of encouragement (“push mama push”!) could be heard from visitors and guide alike! We were privileged to see 40 new wildebeest calves being born in the one hour. 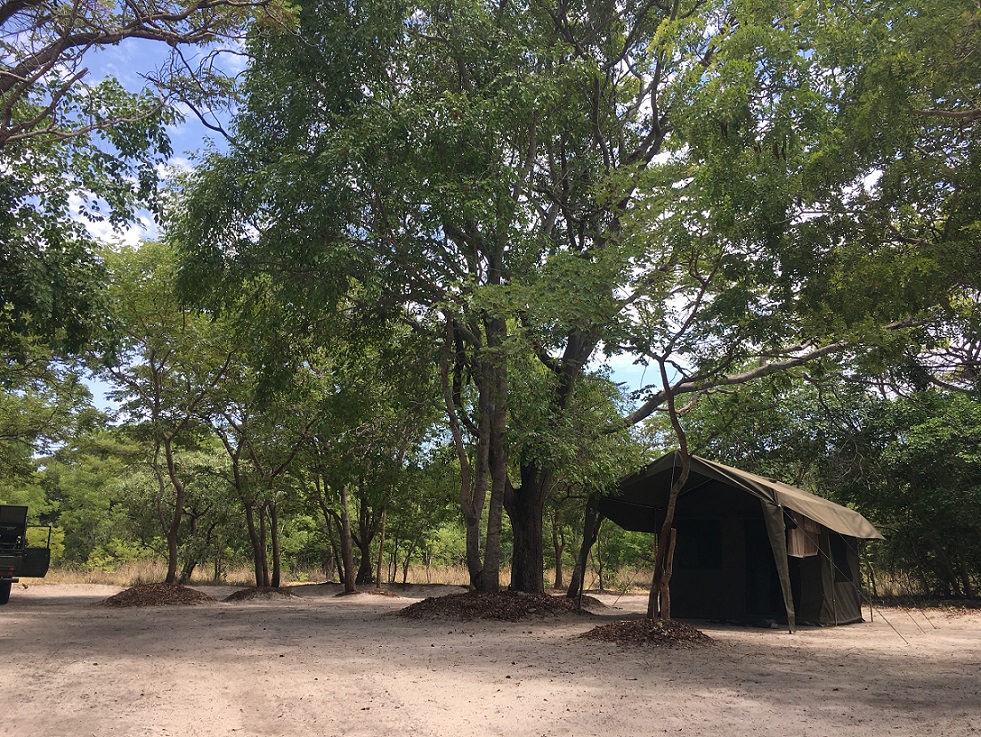 Why should I consider a mobile camping safari in Liuwa Plains?

These camps are perfectly located to explore the Plains using the camps as a base for a couple of days, or longer. The Plains are vast, the size of Wales, with only one permanent lodge in the whole park!

One can explore by vehicle and on foot with Phil or Tyrone who own these camps. They are both excellent and knowledgeable guides who have hosted film crews in Liuwa for many years, during which time they fell in love with the wildlife and ecosystems of the Liuwa Plains. Realising there were not that many options for travellers they began operating their mobiles so that they may share their passion for this vast wilderness. 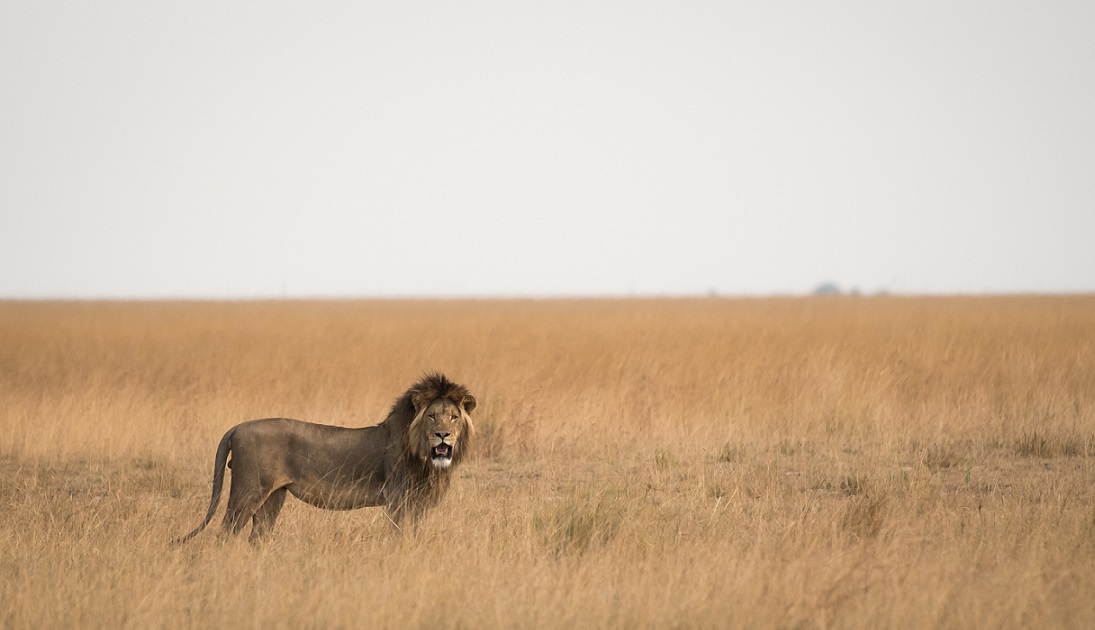 Though the wildebeest are well-known, what one also sees are lion, cheetah and the Park’s largest and most prolific predator, the hyena. I sat one sunset on the plains watching the sun going down over a pink sunset and saw hyena cubs emerging their den. They were cute and super cheeky; one came up to investigate the vehicle, even using the rubber mud guard as a teething ring. Unhappy guide!

One day we watched flock after flock, a murmuration of 100,000 pratincoles, rise into the air and swirl around a water donga. There were also saddleback storks strutting, Kittlitz's plover, ruff, plum-coloured starling, and white backed pelicans trying to fish. 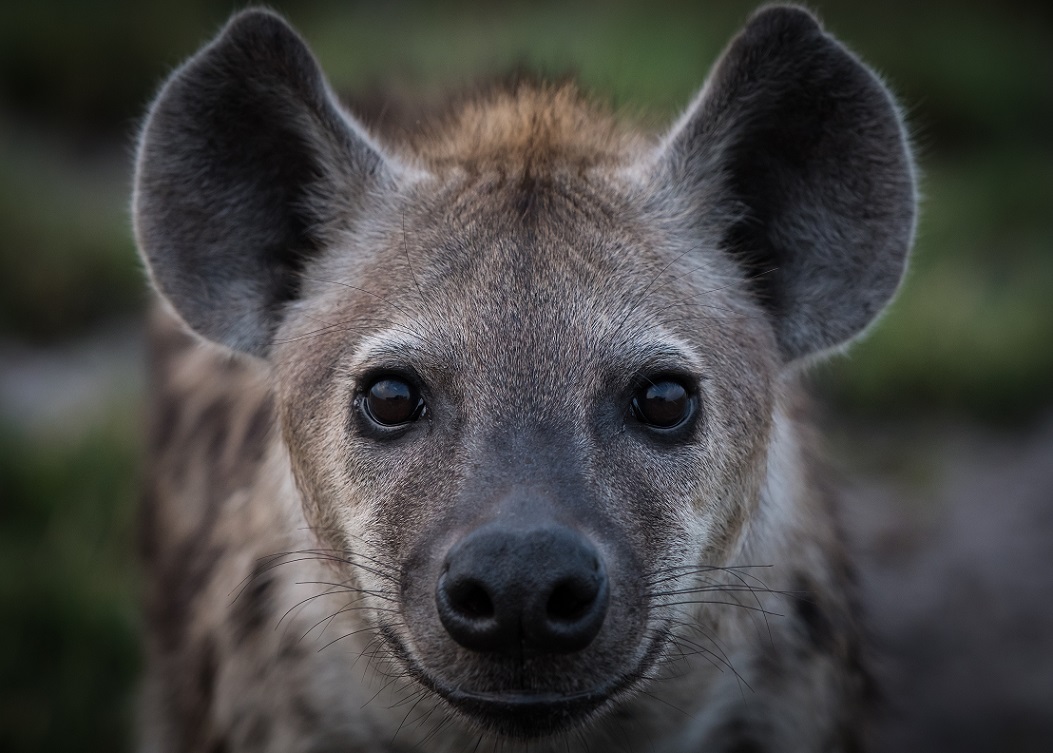 What I find so interesting is that the guides point out the small things too it is not just about spotting the ‘popular’ safari species. We saw the flowers that can be found on the plains during the rainy season which especially include flame lily, Gloriosa sessiliflora, scarlet pimpernel, Tricliceras longepedunculata , dwarf mobola, summer sand lilies, tumble weed lily and Alvesia rosmarinfolia.

What if I’m not sure about mobile tented safaris? 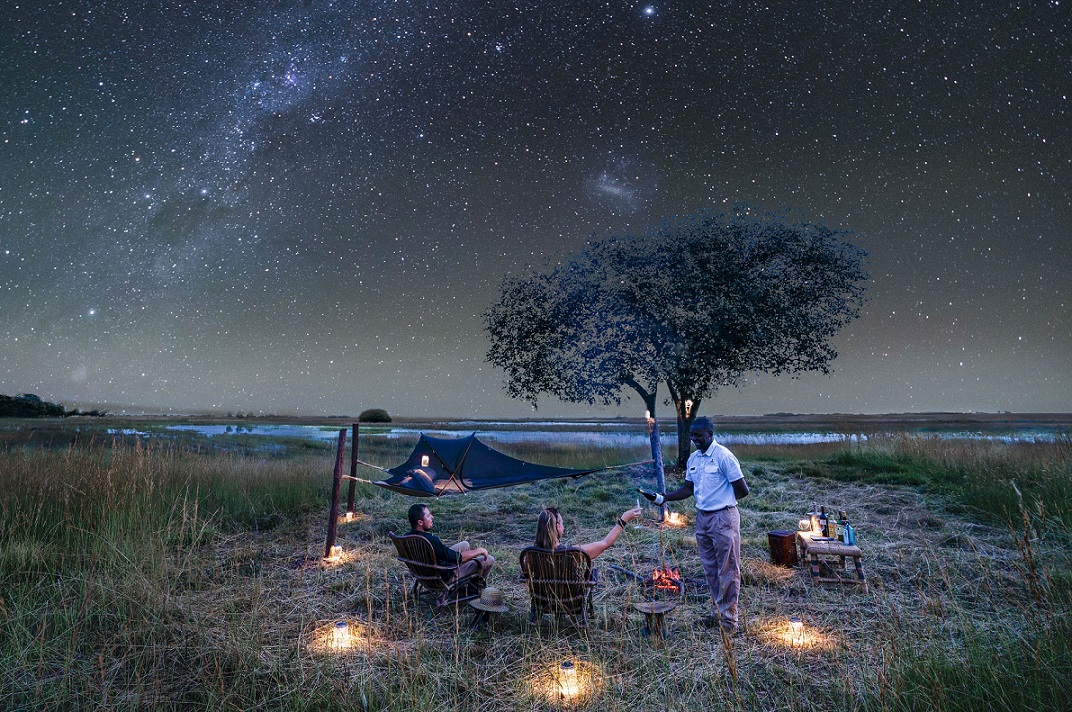 If you’re not sure about mobile camping, fly camping or sleep-outs, why not give them a try just for a single night? In both Liuwa Plains and the Lower Zambezi National Parks there are some fantastic, high-end permanent tented camps which cater for every luxury, who offer a night’s sleep-out or fly camping under the vast African sky. In Liuwa Plains, one can stay at Time + Tide King Lewanika and take one of their sleep-outs on the Plains for just a night.

One drives out onto the Plains with your guide where your sleep-out has already been set up. You sit in front of the camp fire and take in the stars and the night sounds, before climbing into your raised hammock-tent. In the morning you can take a walk with your guide before driving back to the main camp, filled with wonder at the experience. 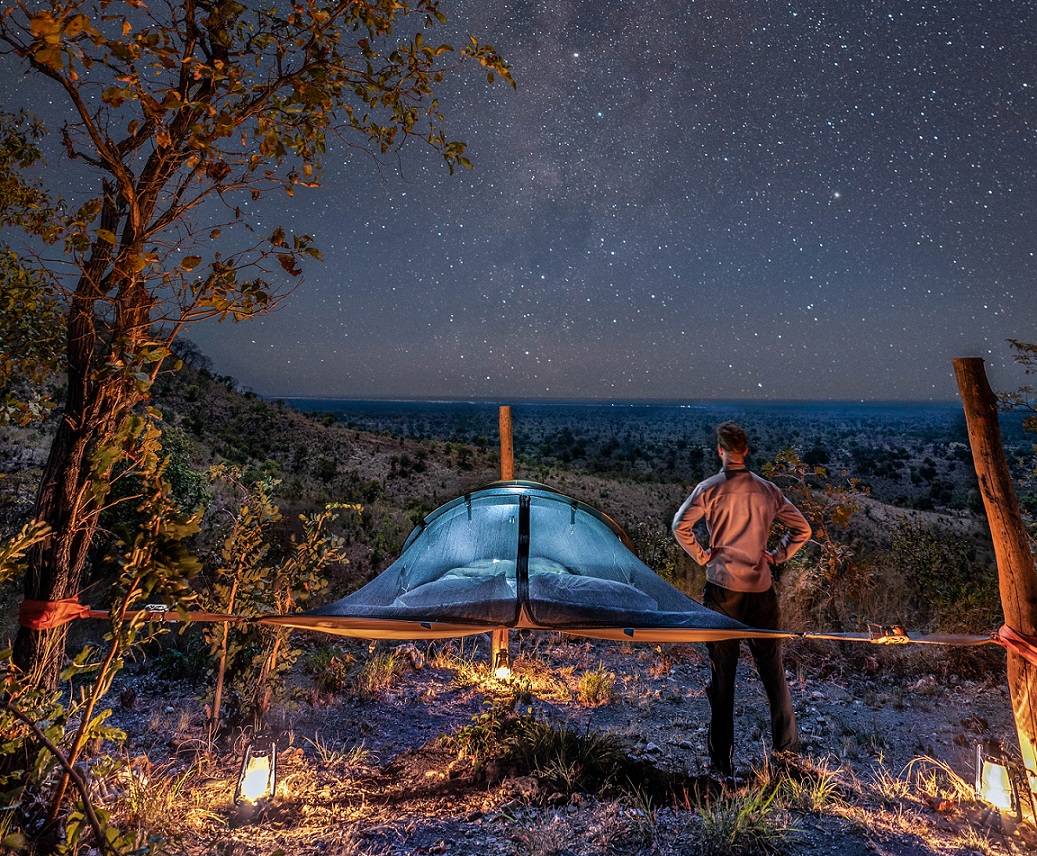 In the Lower Zambezi one can have very much the same experience whilst staying at one of the luxury permanent camps there. One such offering is Chongwe Camp which sits on the riverbank at the confluence of the Chongwe and Zambezi Rivers and is a favourite spot for seeing elephant herds.

Although a more simple style of safari compared to the luxury lodges that are on offer across the continent, fly camping need not be ‘rough’ camping. In Zambia, immersed in the wildlife, sounds and smells of nature, it is one of the best ways to really escape everyday life and decompress on your holiday. It is one of my favourite ways to travel on safari and I highly recommend it for the privilege of being at one with nature.

If you would like any more information about mobile tented safaris in Zambia, please do feel free to get in touch. 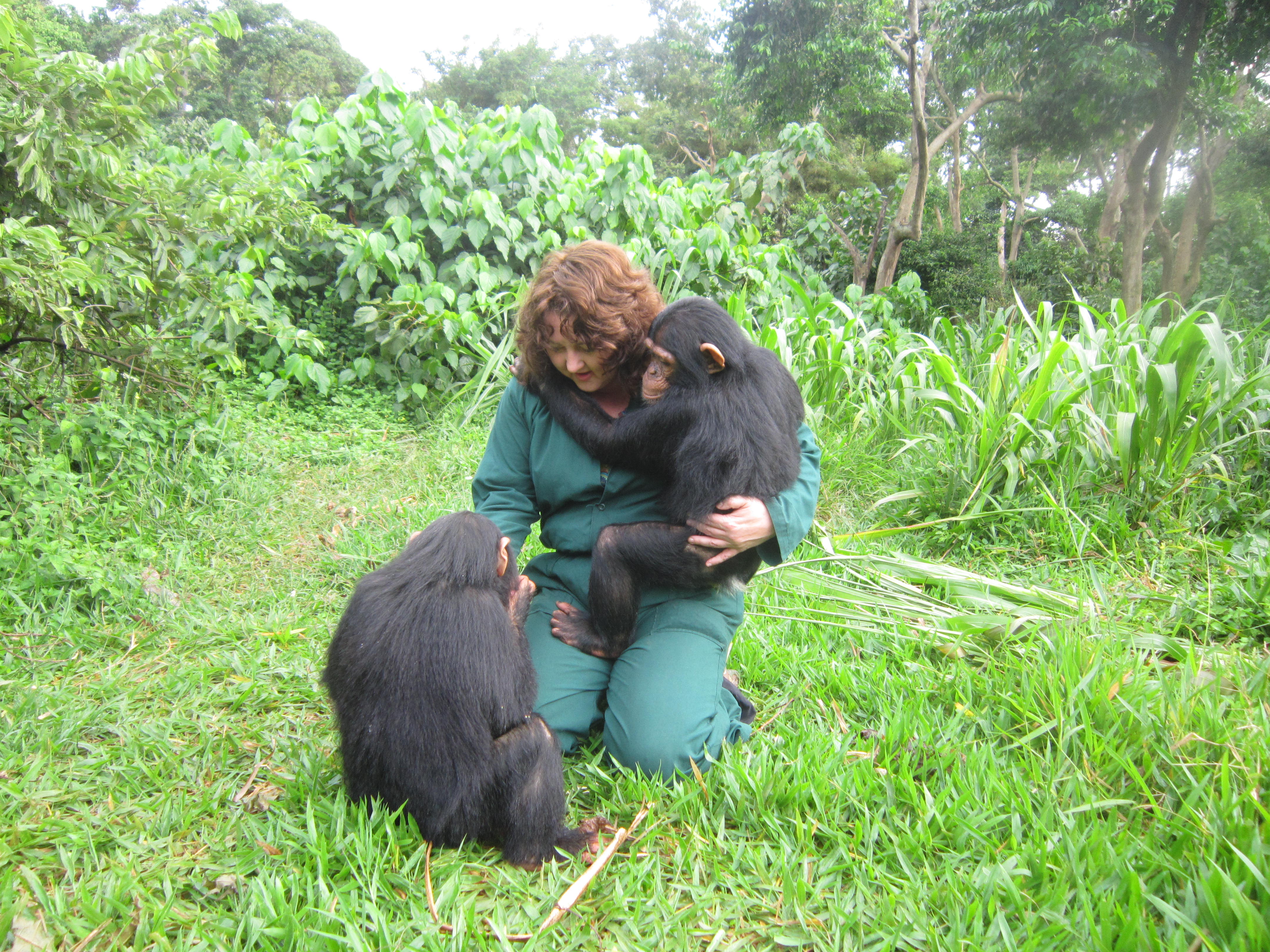 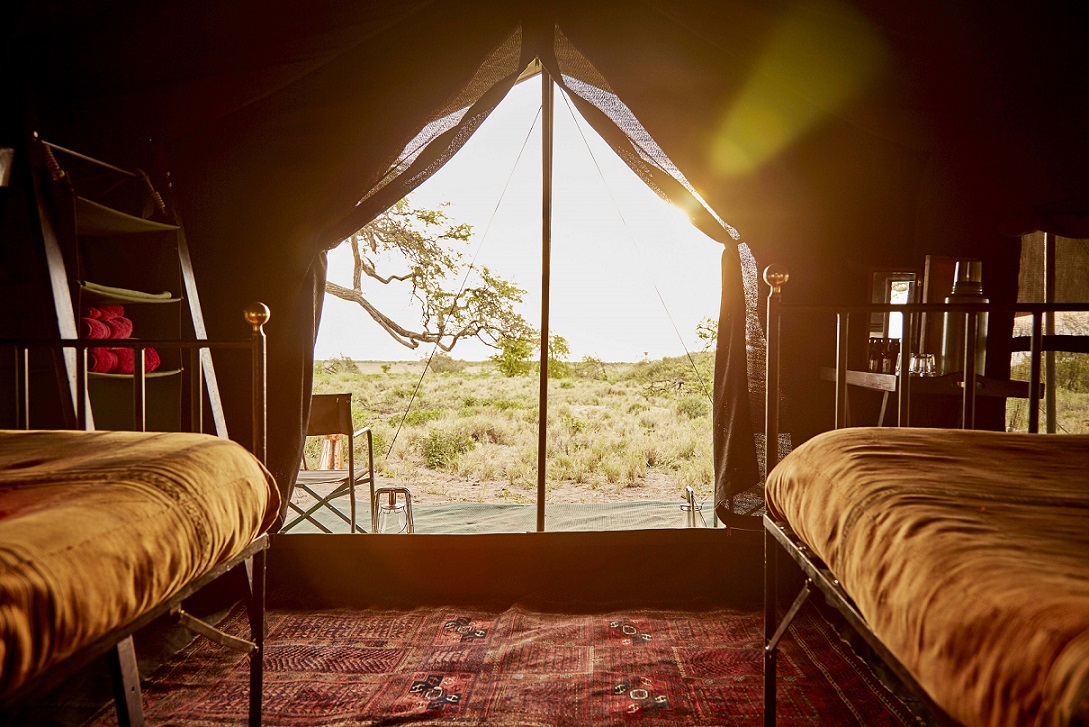 Where are the best ‘glamping’ safari sites in Botswana’s Okavango Delta?

One of my favourite ways to spend time on safari in Africa is in a traditional luxury tented camp or glamping site, preferably mobile. But don’t fear – mobile camps are not short on luxury! What’s more, they offer some fantastic wildlife opportunities and complete decompression from everyday life whilst you immerse yourself in the African wilderness! 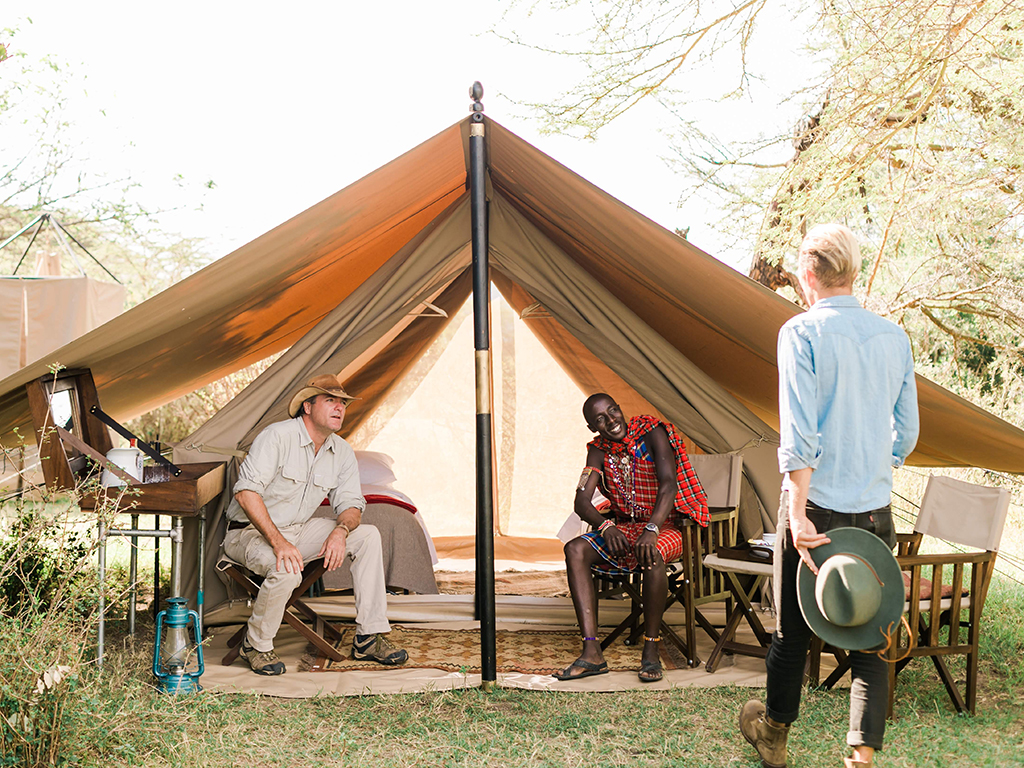 Why is Cottar's fly camp the most authentic private safari camp in the Maasai Mara?

For me, Cottar’s Fly Camping is the perfect way to be at one with Kenya’s nature in a safari camp which is simple but authentic, mobile and exclusive! 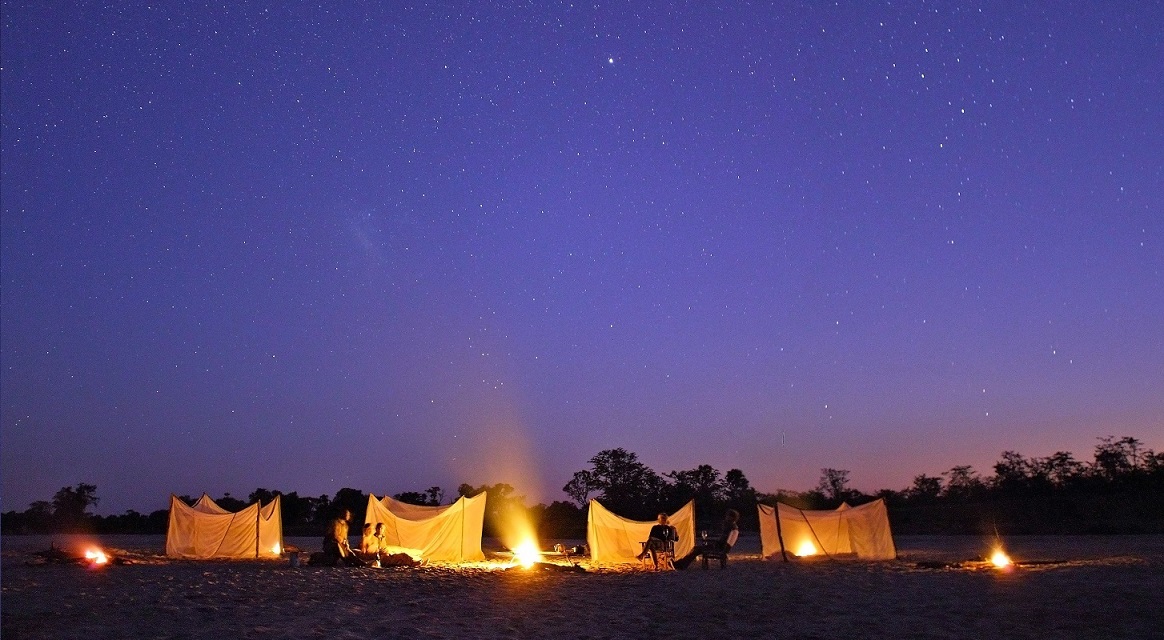