Why is a safari to the Central African Republic a great choice for intrepid explorers? 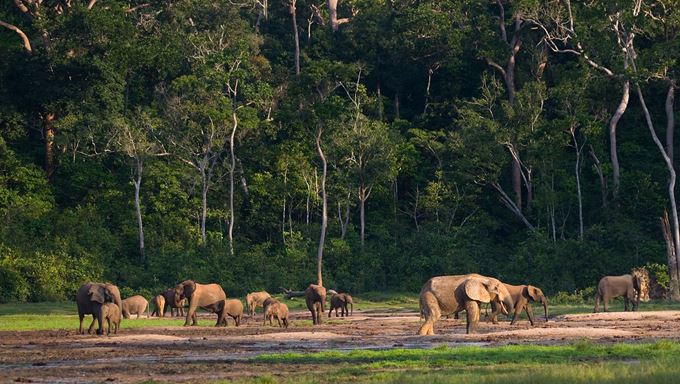 For travellers who truly seek and are inspired by the unusual, who perennially search for adventure, and who love both gorillas and elephant, then the Central African Republic truly is the answer!

Actually, the CAR makes the most perfect combination with the Republic of Congo (not to be confused with the DRC), which is how I experienced this magical place for myself, beginning with gorilla trekking in Odzala National Park before taking a boat to Sangha Bai (also known as Dzanga Bai). Alternatively, one can fly to Sangha by flying first internationally into Bangui, but if one has the time, then it is best done from Kabo in the Republic of Congo. 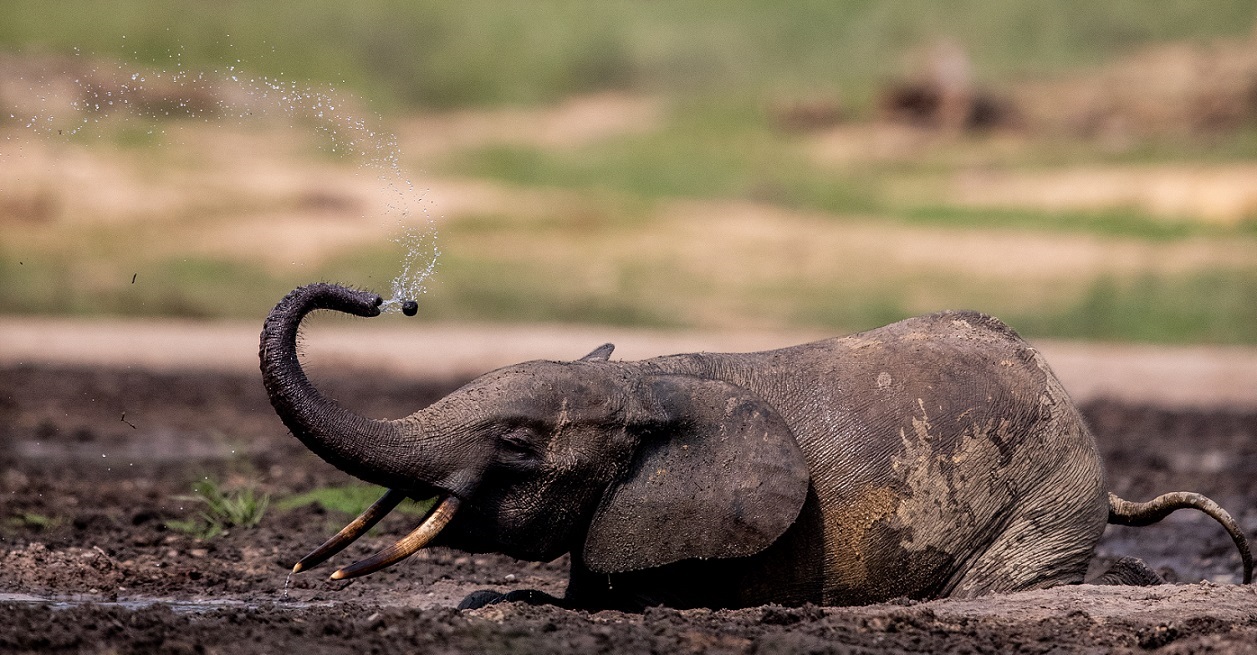 A great choice for intrepid explorers?

Both Central African Republic and The Republic of Congo offer the most sublime gorilla trekking for the western lowland gorilla, which is arboreal, unlike the mountain gorilla.

This is not only a unique opportunity for tourists, but the activity also brings benefits to the local communities, in this case, the Ba’aka tribe, who play a crucial part in the tracking and habituating the animals to human presence.

This meets one of the main goals of the Dzanga-Sangha Ecotourism Program, which is to generate income for conservation and the socio-economic development of the area. 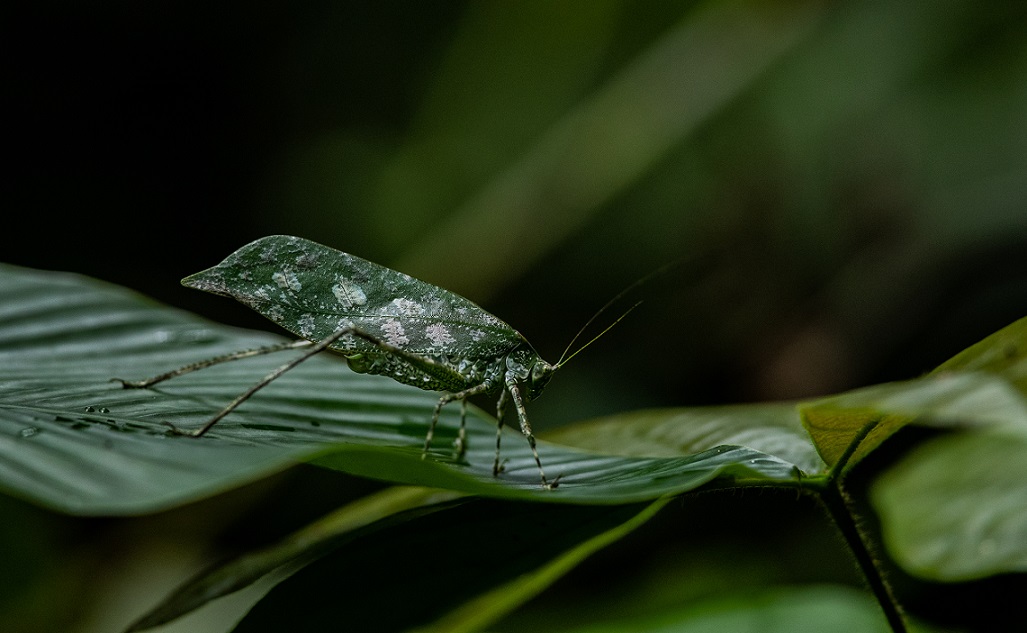 I was lucky enough to recently visit Dzanga-Sangha National Park myself as part of my safari to Africa. After spending a few days in Odzala National Park tracking western lowland gorilla and exploring the bais and plains of the Park, we then travelled for seven hours by boat from Kabo, in the Republic of Congo. We travelled along the river to the Central African Republic, passing Cameroon on the left.

I was immediately transported to the famous explorer and scientific writer, Mary Kingsley’s book, Travels in West Africa. Time had stood still. This had never been offered as a tourist venture before! There are around four stops, two to police points and two to immigration on either side. The journey is truly beautiful, travelling along the river which reaches around 6 km across in places. It was utterly spectacular to see the fabulous unspoiled forest that we were passing, along with a few villages. 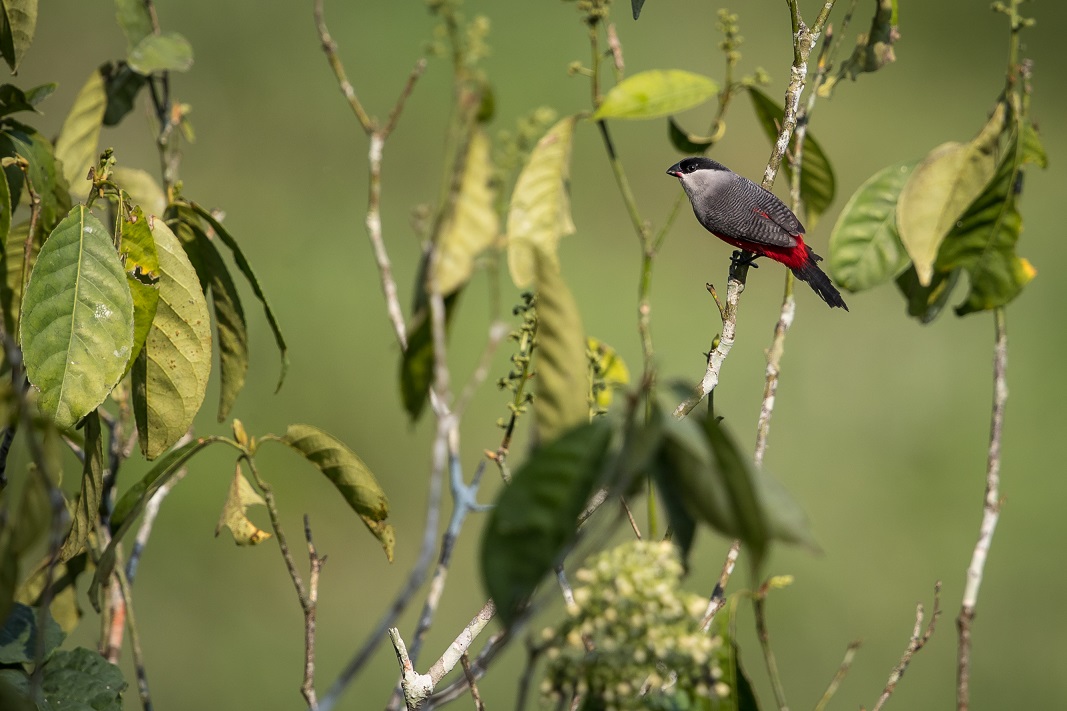 This is the perfect example of absolutely pristine rainforest with no deforestation and just limited habitation. No wonder it is called the right lung of Africa! We arrived at Sangha Bai by boat, and then took a small pontoon to the lodge.

Sangha Lodge has just six rooms, all simple and fashioned from wood. Each room has a double bed with a mosquito net, plus a simple en suite bathroom with loo and shower. The lodge overlooks the Sangha River. 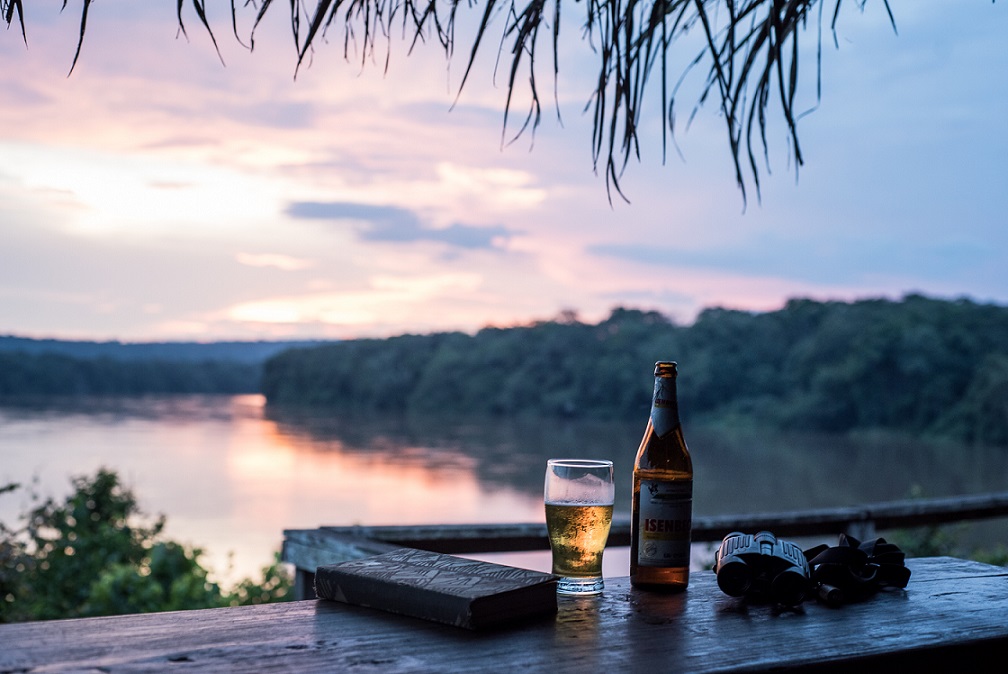 Rod and Tam run the camp with their son Alon who is a fantastic guide. Our evening meal was excellent – local kaptein fish which was delicious. The following morning we departed early by boat into the Dzanga-Sangha National Park, run by WWF. Part of the “Northwestern Congolian lowland forests”, the Dzanga-Sangha Protected Area is located in the southwestern corner of the Central African Republic, in the Yobé-Sangha Prefecture.

The area is characterised by its numerous forest clearings with mineral-rich soils, known as bais. A mosaic of ecosystems including rivers, streams, marshlands, typical grassy glades, and marshes, support viable populations of complete faunal and floral assemblages. These include top predators, rare and endangered species such as forest elephants, gorillas, and several antelope species such as the elusive sitatunga and the rare bongo. 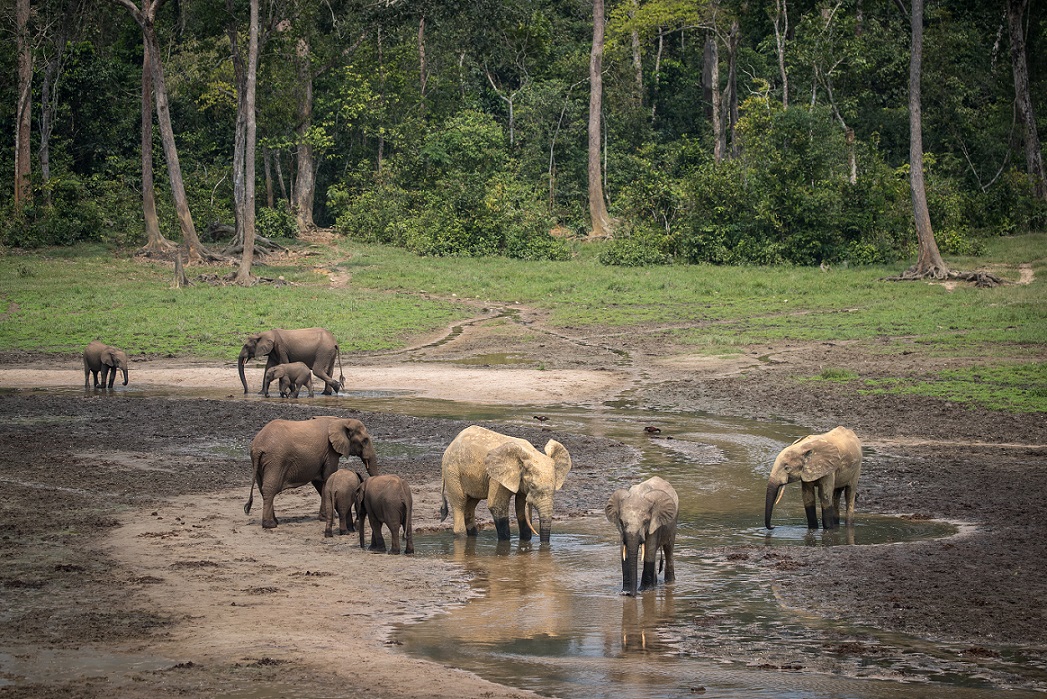 They have approximately 4000 elephant in the park, but very sadly they are losing around 100 elephant a year to poaching, despite their anti-poaching regime.

We spent some time in the elephant hide in front of the bai, where the scientists conduct their work researching acoustic communication amongst the elephant. Part of their research includes studying their low-frequency communications and trying to determine their meaning and purpose. 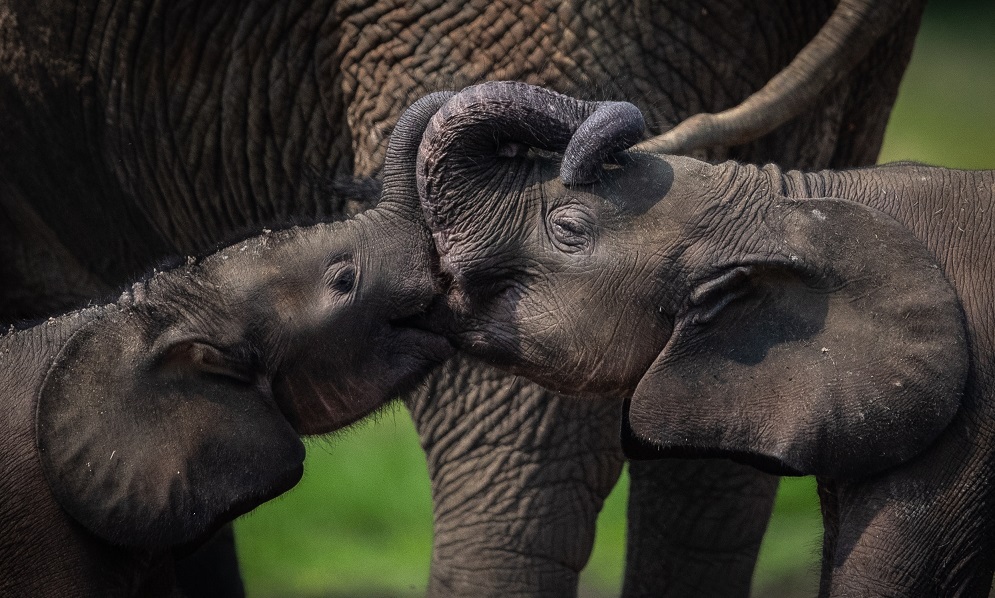 One is rarely given the opportunity to observe for several hours on end in this way, and we saw many small herds of elephant. This is unique within itself, because there were around 70 herds of elephant, but rather than observing them in large herds as is typical on the plains, there were mainly small herds of just a handful, coming to feed at the waters that bubble out of the rich mineral bai’s.

The most fascinating was the constant movement and interaction and greetings between all these herds – something rare to witness on such a profuse level. I could have happily spent a week here, with constant forays to the bai of plenty, as I termed it (!) as each day brought a new experience. 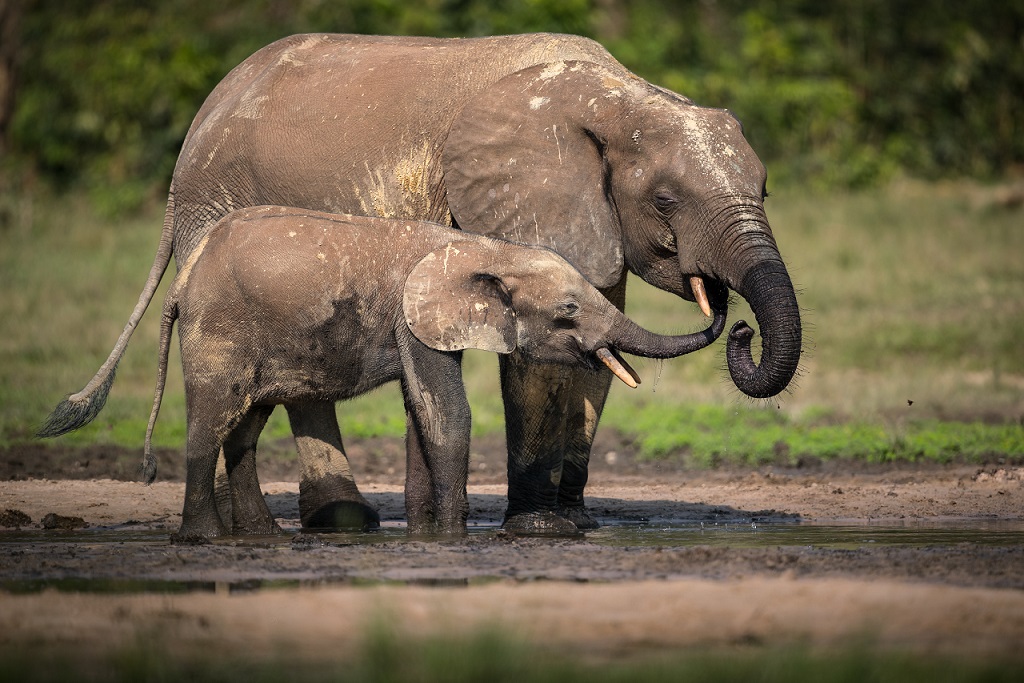 I saw several things that I hadn’t come across in other herds of elephant I have observed; I saw elephants with beards beneath their chins and their offspring, although just around 1 year old, with the same; I saw how an elephant cleans and scratches its penis by scratching it with either leg and extending it fully; that some elephants when displaying aggressive behaviour lifted their tail; that a lazy elephant carried its trunk across its tusks; that the majority of elephants have tusks, albeit much smaller and quite fine. There was even an elephant with a huge amount of scar tissue over its hind legs – something I have never seen before. 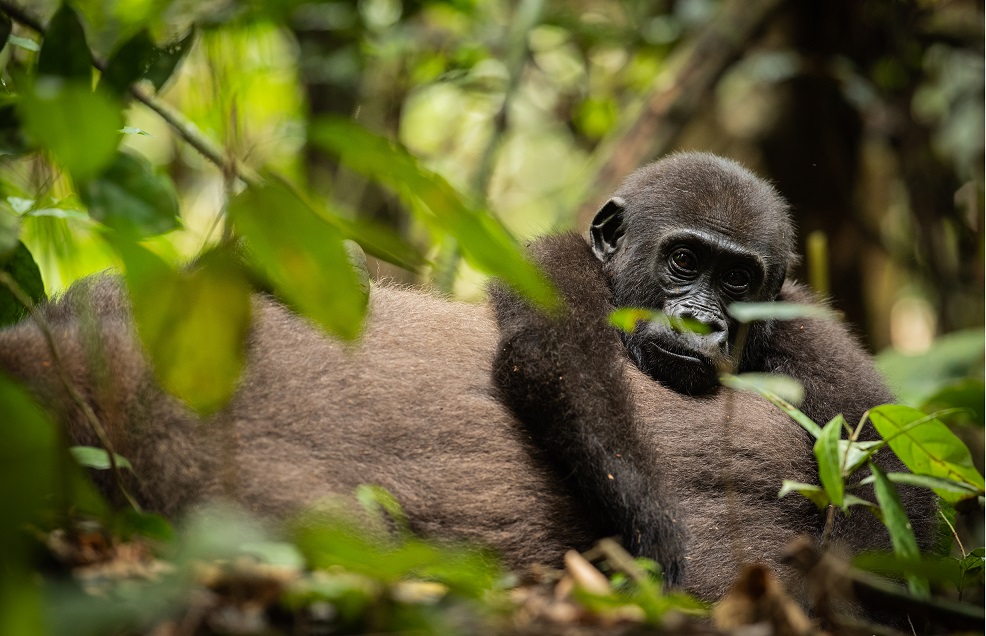 Forest buffalo, red river hog, giant forest hog, the sitatunga and the Bongo antelopes are other species that, should one have the patience, one might observe sharing the bai too. There is also gorilla tracking which one can take part in, which starts around an hour and a half away. One can also track mangabey monkeys.

There are two groups of habituated gorillas here, and a maximum of three people can visit these gorilla groups (unlike Rwanda or Uganda which is eight). This makes for a very immerse and private experience, and one can often get much closer, but the trek can be arduous (unlike the Republic of Congo which is easy and often within around an hour) and therefore a good level of fitness is required. 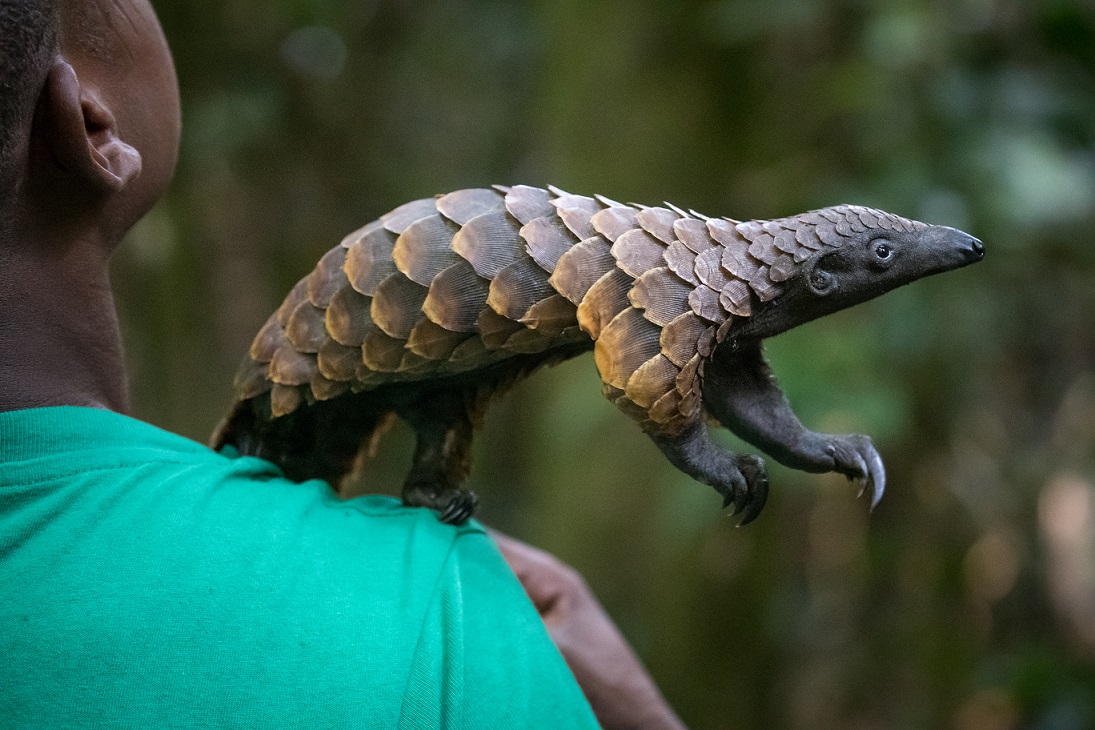 Sangha Lodge runs the Sangha Pangolin Project which rehabilitates pangolins rescued from the bushmeat trade or from trafficking. They have three species of pangolin native to the forest in the concession – white-bellied, black-bellied and giant pangolin. When a pangolin is healthy enough to return to the wild they first have a ‘soft-release’ into the concession’s protected pangolin sanctuary.

We took a walk to the pangolin area (pangolarium) where we saw three tree pangolins (including black- and white-bellied). They are also raising a blue duiker, which is very sweet, and will be released back into the wild when it is a bit older. As the sun went down we took a cruise along the river to the edge of the Congo Basin, which was the perfect way to end the day. 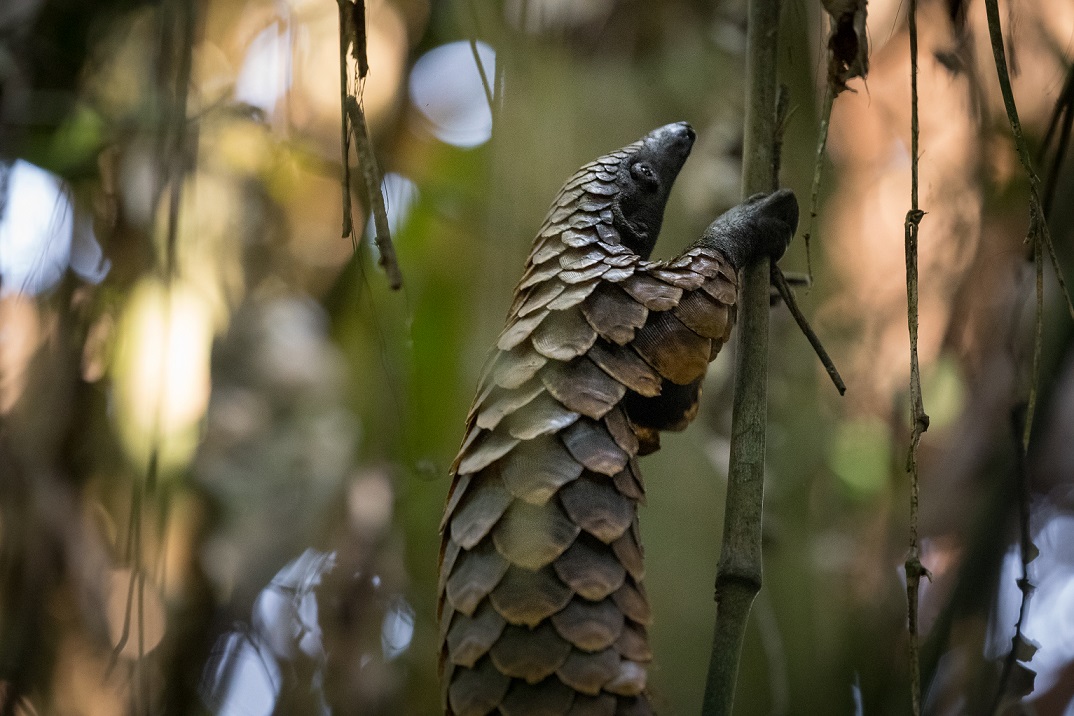 Should one wish to interact with and learn about the culture of the local Ba’aka tribe, one can go out with the tribe and accompany them on a hunt. They are the last hunter-gatherers in this region and hunt for sustenance. For those that would rather not witness an actual killing, they can simply demonstrate how they do this or they will take you off foraging for honey and plants, etc. On your walk, you may even see the Picacarthy bird which can only be found here.

After our time with the Ba’aka, we walked for around an hour through streams and the forest to the park headquarters and then took a drive back to the camp which took around 30 minutes. 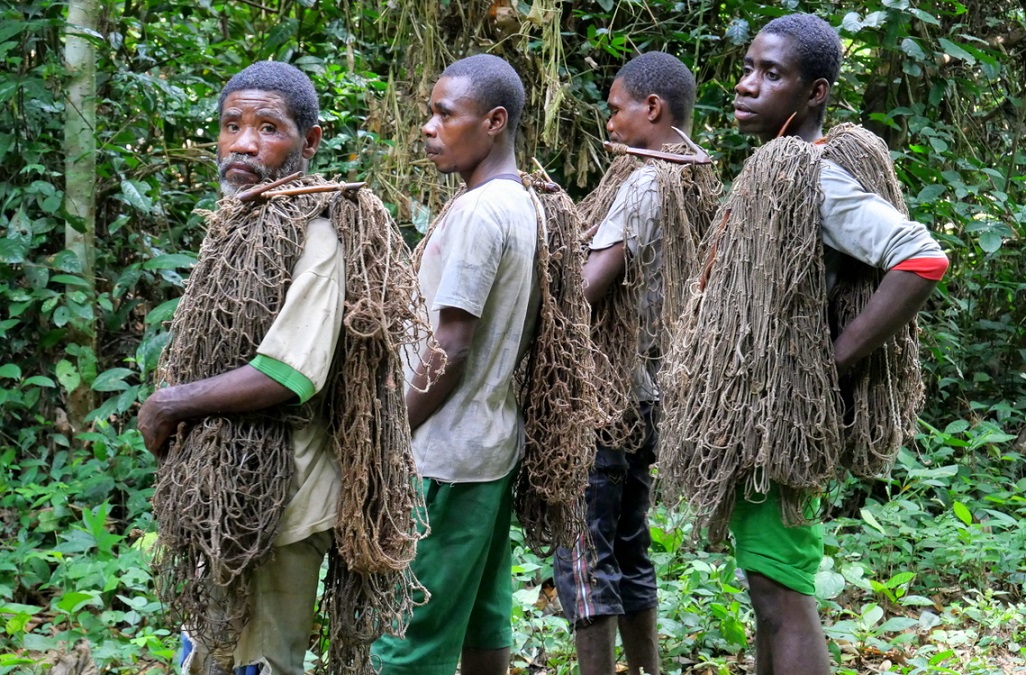 The journey back to the Republic of Congo by boat took us only 4.5 hours (the current was better and flowing in our direction) and arrived at Kabo airstrip where we then took the 45-minute flight back to Mboko for lunch before returning to the airstrip for the 2-hour flight to Brazzaville. Or, of course, one can simply fly back to Bangui!

This was a truly pioneering experience and I would recommend it to any intrepid travellers out there who are seeking something different and completely off-beat! Please do get in touch for more information, or, if you would just like to dream for now, you can do so at our Video Library. 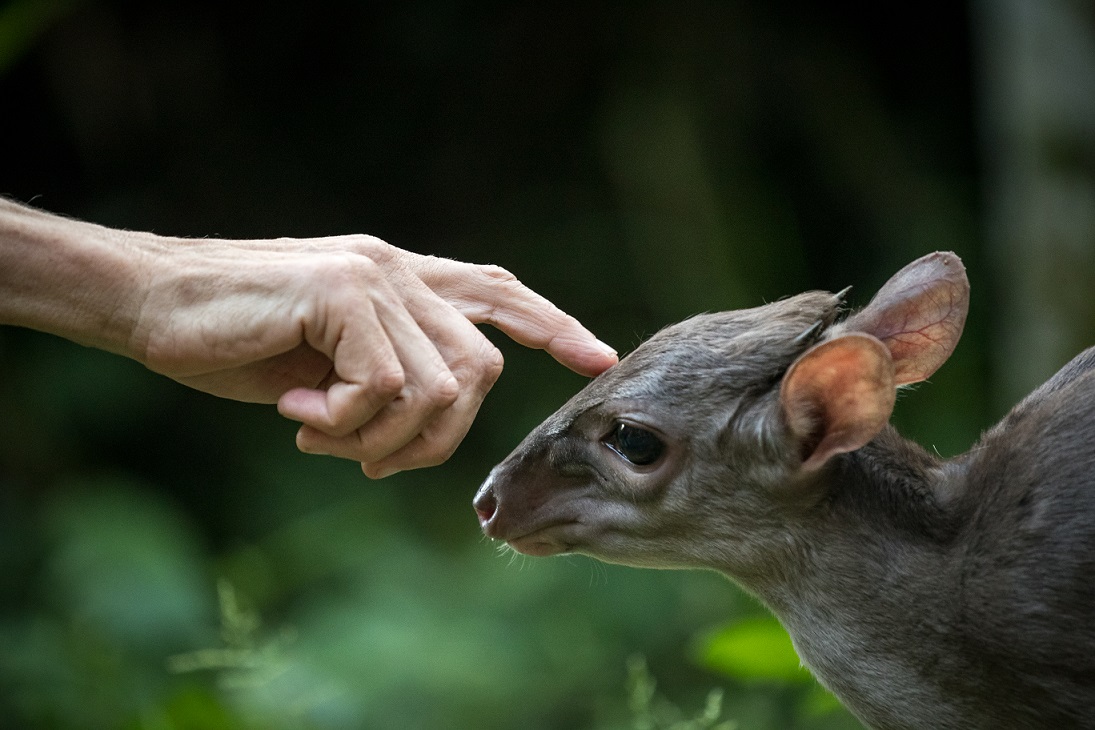 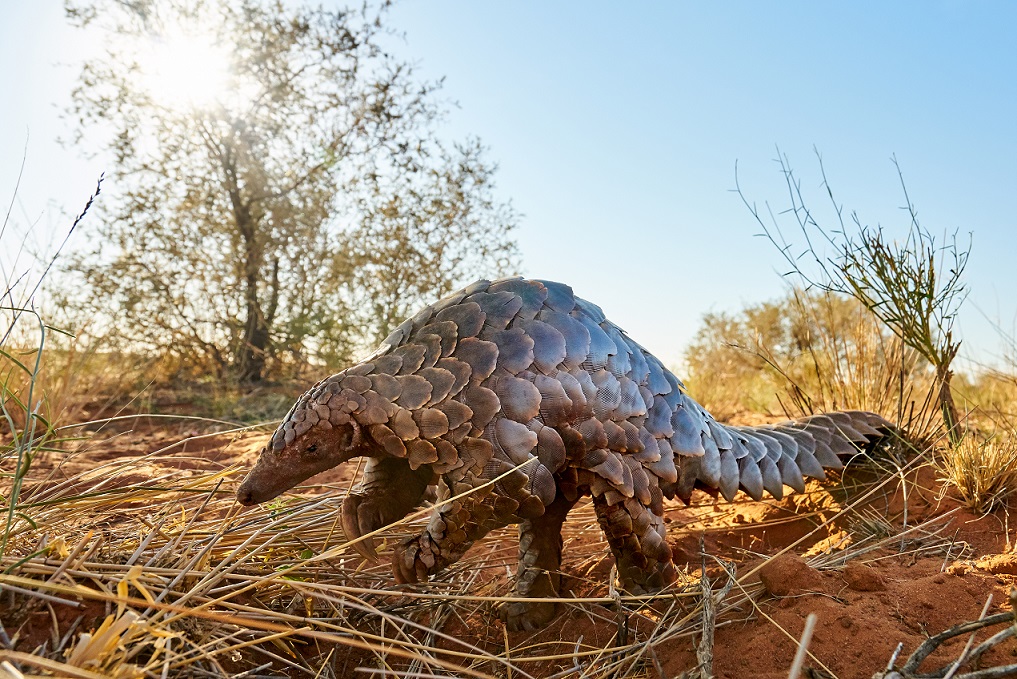 Why is the Pangolin the world's most illegally trafficked mammal?

The elusive pangolin is the world's most illegally trafficked mammal and on the 'most endangered animals list' but most people have never even heard of them! So on February 15th - World Pangolin Day 2020 - how can we all help to save this adorable little creature and where might you be able to see one in the wild? 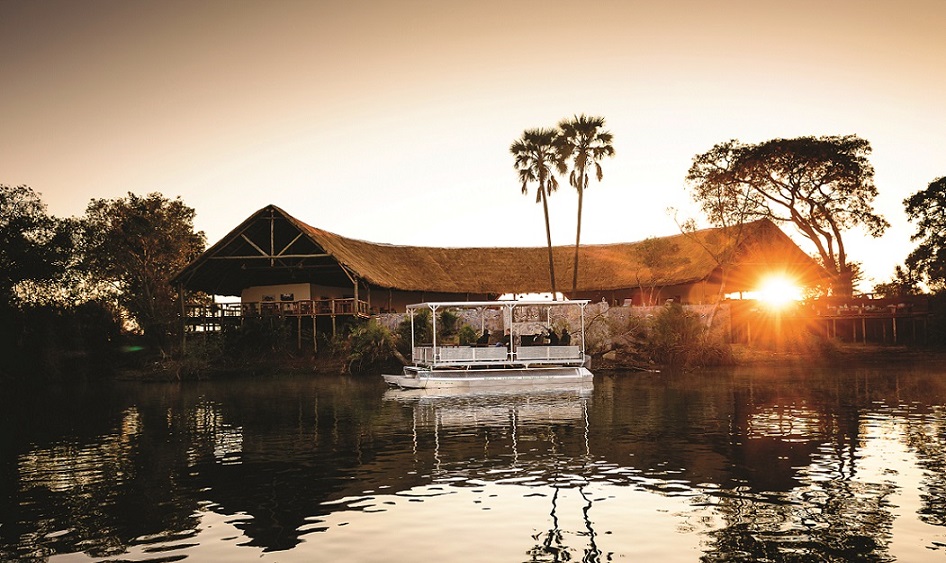 Silent, sustainable, eco-friendly safaris in Africa – is this possible? Yes! Most definitely! Thanks to an electric-power initiative in Zambia, one can now take a luxury safari in Africa with a greatly reduced footprint. 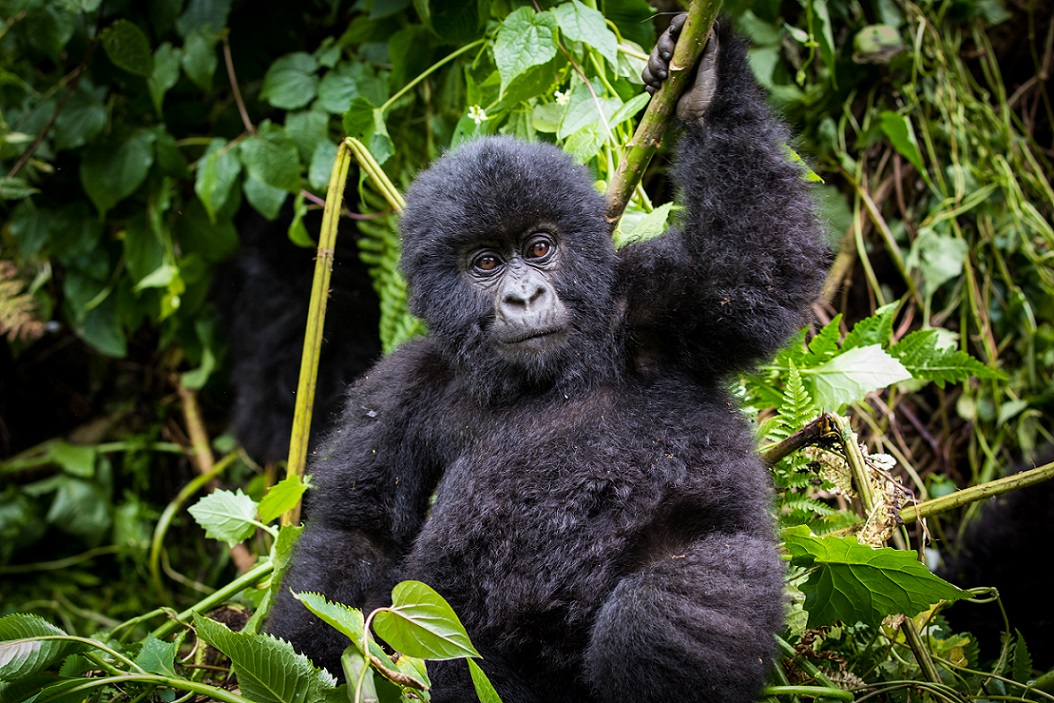 Why is COVID-19 a threat to Great Ape conservation?

The coronavirus pandemic could be a major threat to great apes. We take a look at the risk of transmission from humans to apes, mitigation measures, other cases of respiratory disease and ways in which you can help to make a difference to ape conservation during this crisis.