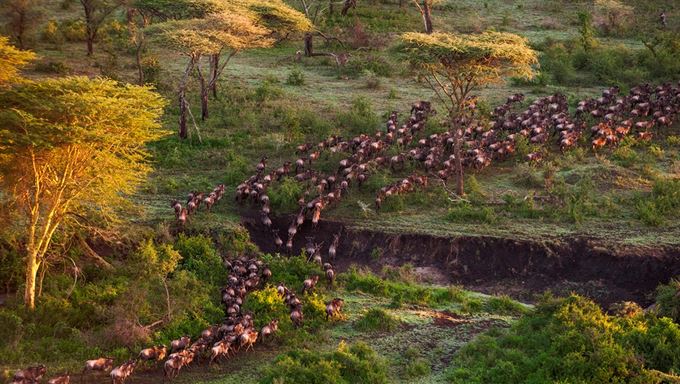 The Great Migration is regarded as one of the natural wonders of the world and is familiar to people across the planet - even if they've never set foot in Africa before. This is one of Mother Nature’s most impressive spectacles!

Of course, there are many major migrations on our planet - on land, in the air and in the oceans - but the one that is so often tagged as the greatest of them all is the Great Migration of the herds of ungulates around the Mara-Serengeti ecosystem of East Africa.

Many people have seen the famous crossings of the Mara River on documentaries, however, far fewer people are aware that the phenomenon is not simply a journey from A to B, and that it involves a whole lot more than crossing a crocodile-infested river!

You can go on safari and witness different parts of their epic journeys at different times of the year, because The Great Migration is in fact a never-ending, cyclical odyssey of the herds of (mainly) wildebeest and zebra. It involves a total of over two million animals - around 1.5 million wildebeest and 500 000 zebra, and a plethora of predators that follow in their wake!

The Migration in January and February

The cycle begins in Tanzania at the end of December and is largely based on rainfall as these animals follow the rains and the sweet, new growth of grass and its accompanying nutrients. It continues through January and February, on the short grass plains of the south eastern part of the Serengeti ecosystem. Here the wildebeest graze and give birth to approximately 500,000 calves within a 2 to 3-week period: a remarkably synchronised event.

The Migration in March and April

As the dry season reaches its peak in March the great herds head west in search of water and fresh vegetation, and by April, the 'long' rains are falling and the herds scatter somewhat, usually across the south-western reaches of the Serengeti ecosystem.

The Migration in May and June

The herds gradually move towards the western corridor in May and June, crossing over the Grumeti River.

Here in the western corridor of the Serengeti and Grumeti region in May and June “the rut” takes place. The rut is, quite simply, the animal mating season of ruminant creatures. For the onlooker this is an electrifying sight with the males being particularly active, and keen to put on a show for their females.

The Grumeti region has its own resident wildlife so that in fact, throughout the year, wildlife viewing is always excellent here – especially for predators. There is even the opportunity of riding amongst the migration for those that wish to horse ride!

What is particularly good about visiting Tanzania at this time of year is that it is less crowded in terms of visitors - allowing you plenty of space to enjoy the bush and what's on show! It is also very green which is another bonus for anyone who is interested in photography.

The Migration in July and August

July and August-time sees the mass Mara River crossings, made famous by wildlife documentaries. This takes place in the western and northern parts of the Serengeti and the Masai Mara, with the lush grasslands of the Masai Mara being the reward for those who survive the treacherous journey and the river crossing!

The Serengeti region tends to be far less crowded and there are fewer camps so one has a more private experience. I always recommend that people staying in Kenya should in fact spend time in the private concessions, which allows access to the Mara but offers a far more private experience as well as the opportunity to walk.

The Migration in September to November

The wildebeest then graze in the Mara until October / November then make their way back to the Serengeti to start the cycle once again.

The locations and dates of each part of the cycle, though, are never exactly the same, much depending on rainfall and the availability of water and grazing. If there is an unusually dry spell in East Africa as has happened in recent years the Migration can change, so it is always worth checking with an expert for up to date information when you are planning your safari.

Where is the best place to stay on your Great Migration safari to Africa ?

Depending on when you would like to travel, you can spend time in the Masai Mara or the Serengeti, and for those who are truly compelled by the migration, you can take in both sides of the eco-system – in Kenya and in Tanzania. You can even witness this incredible event from the air, if you wish!

The very best way to see the migration and have a more pristine experience is from your own luxury, private mobile tented camp, styled on the old hunting camps of the 1930's. All the comforts are there - en suite hot water showers and toilets, beds with comfortable mattresses, quality linen, Persian rugs, ice cold drinks, good food and excellent guiding.

Your private mobile is set up, purely for you and your party, in an area close to the migration herds with magnificent views. You have complete flexibility and freedom each day, and you have your own private guide and vehicle so you can do, and see, exactly what you want!

In order to be away from the masses in Tanzania, I tend to recommend staying in the Maswa region where you can have a tented camp erected for you, or stay at a luxury tented camp where it is just a handful of people who are allowed to be here. It also allows you the opportunity to walk.

For me, there is nothing better than to sleep under canvas, with the scent of the sage bushes on the early morning dew drifting through the gauze on my tent windows. Or listening to the sound of the lions calling at night, marking their territory, or hyena whooping.

Sitting around a campfire at night, the stars and planets in sharp relief in the inky sky, discussing the day’s adventures with your guide and learning about life in Africa – it simply doesn’t get better than this! And of course, having that freedom and flexibility each day, to roam as you please on your timetable – no one else’s – that truly is key.

Otherwise, for those who are seeking the finest experience in luxury accommodation, then Singita is the best choice for the northern Serengeti from July through to September and Singita Grumeti, Faru Faru, Sasakwa and the tented camps in June.

Serian is another fabulous choice, run by our good friend Alex Walker and these lovely camps are set up in both the south and northern parts of the Serengeti, depending upon the migratory movements. Lastly, Legendary have a fabulous offering in the Mwiba concession with the gorgeous Mwiba Lodge. This also serves as a tremendous cultural reference and where one can watch the local tribes such as the Datoga people hunt.

Apart from the Serengeti, luxury tented camps can also be erected in the Ngorongoro Highlands (which is also a fabulous walking area), Tarangire (known for its elephant population), Lake Manyara and Lake Natron which are wonderful birdlife areas. You can have a professional wildlife photographer or film maker accompany you, or a guide who can do yoga with you (a real plus!) and even meditation. In fact, I always recommend that one should have the finest wildlife guide accompany you throughout which offers continuity and smooth running of any safari.

I would love to discuss the Great Migration further with you, please do contact me for more information!

Legendary Expeditions - Header image, image 1 of wildebeest at river edge, image 4 of dining on the plains, image 5 of the river crossing, image 7 of  the mobile tented camp, image 8 of candlelit dining, image 10 of Mwiba Lodge and image 11 of the Datoga tribesmen

Singita - Image 4 of the rut, image 6 of wildebeest on the plains under a tree, image 9 of Faru Faru's pool and view 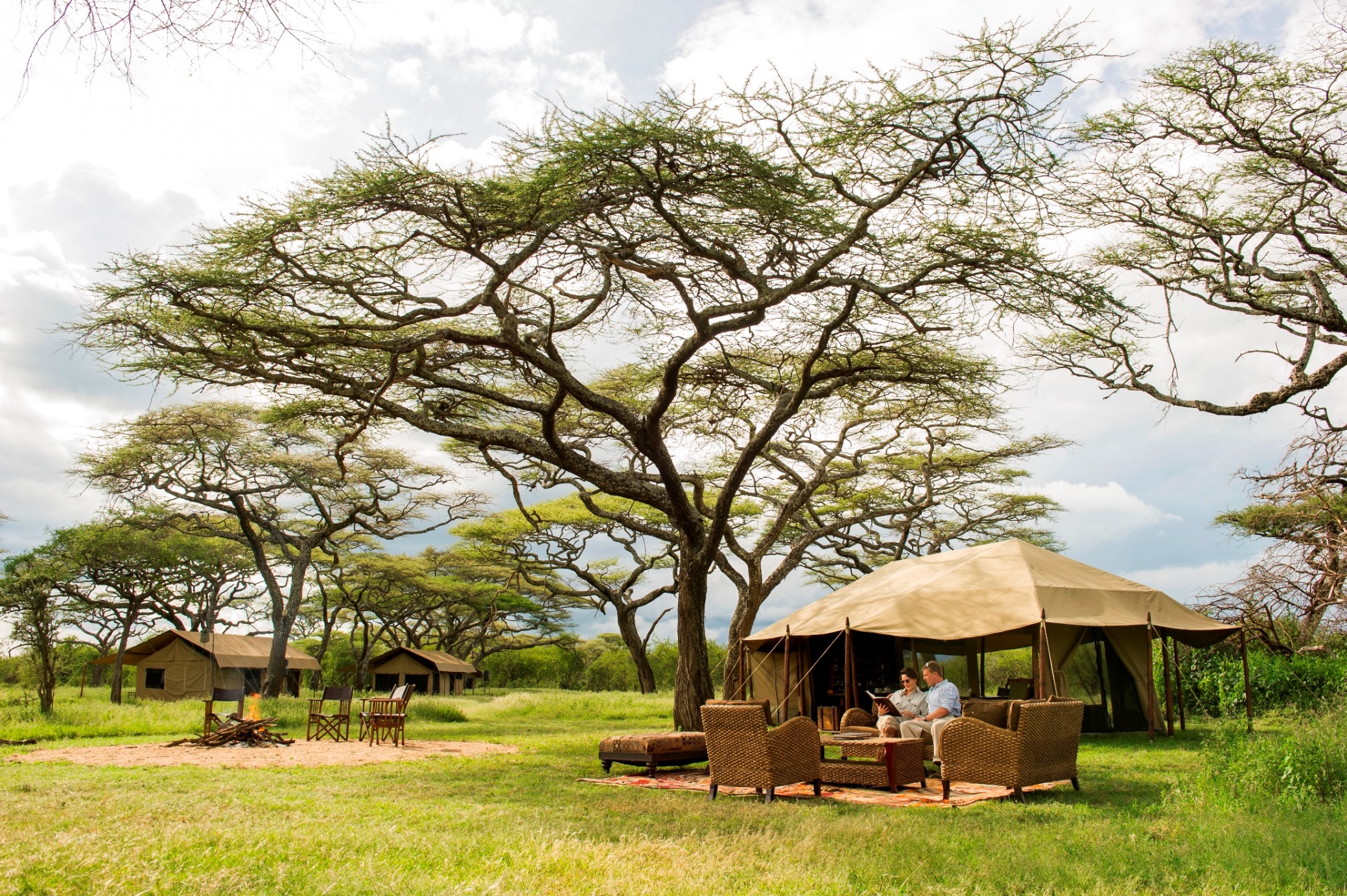 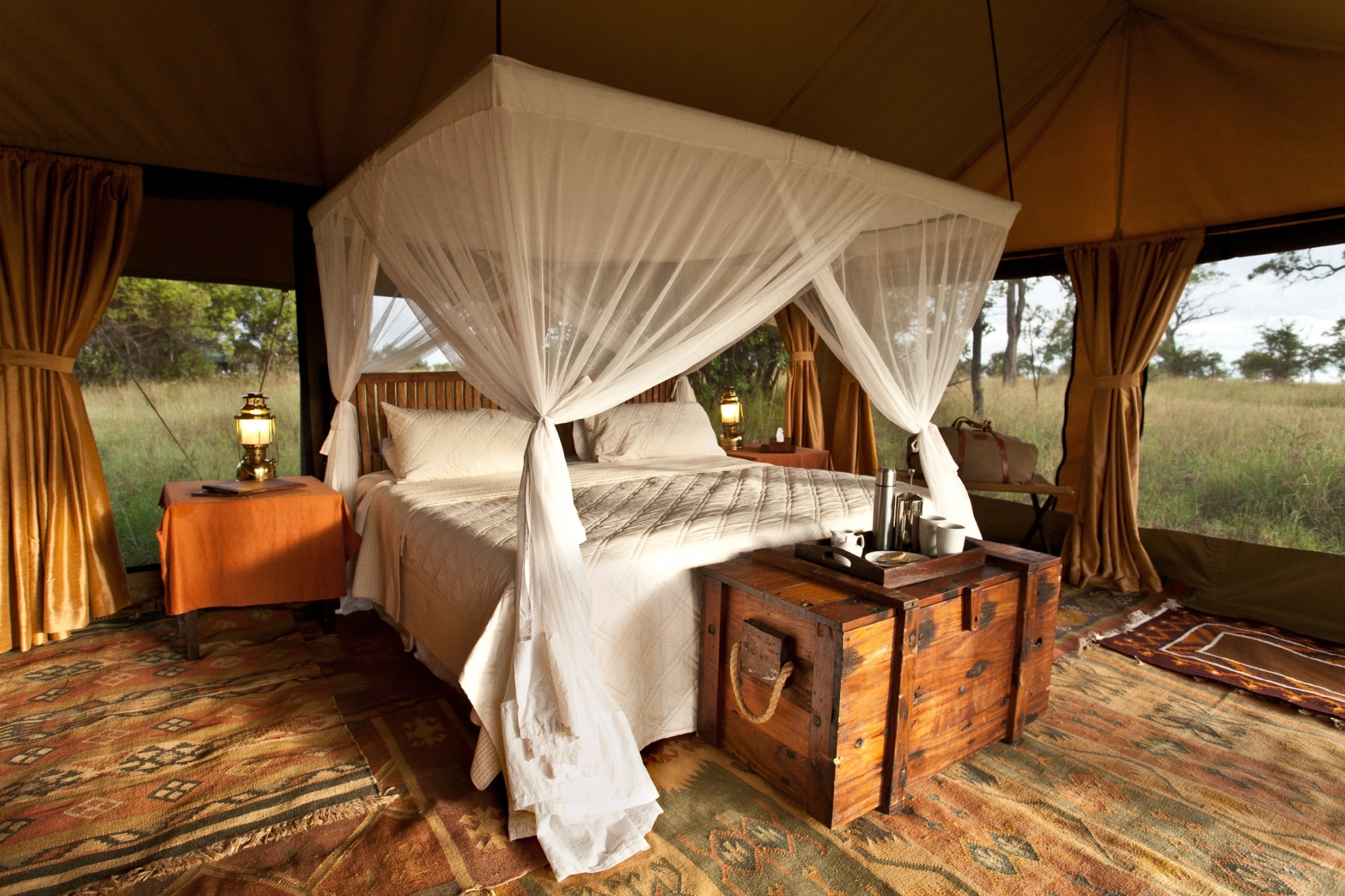 What are the benefits of a luxury private mobile tailor-made safari in Kenya?

Many people ask me what are the benefits of a private mobile safari in Kenya. For me, it is the ultimate way of going on safari! Complete flexibility, freedom and exclusivity! Who could want more from life? 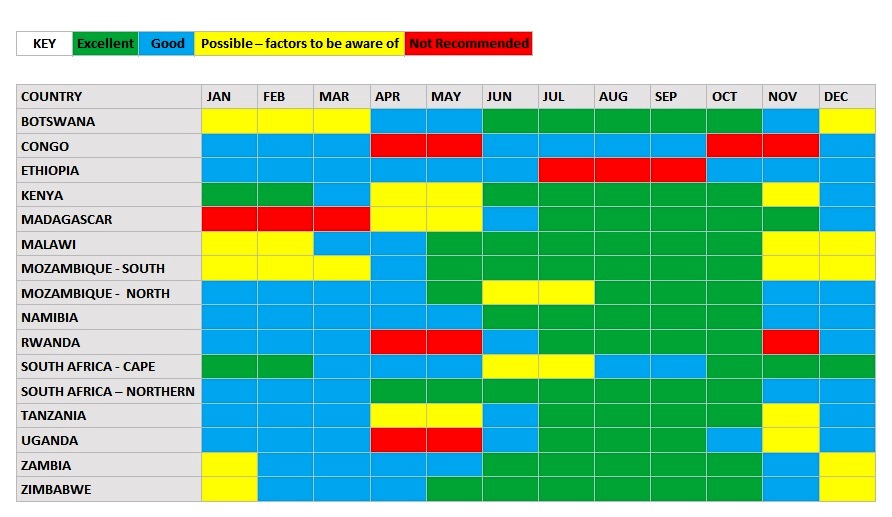 Thinking of going on safari? With so many choices and so much to see, here is a useful table with best time to travel to Africa on safari - at a glance.