Why you should experience the Way of Tea in Japan! 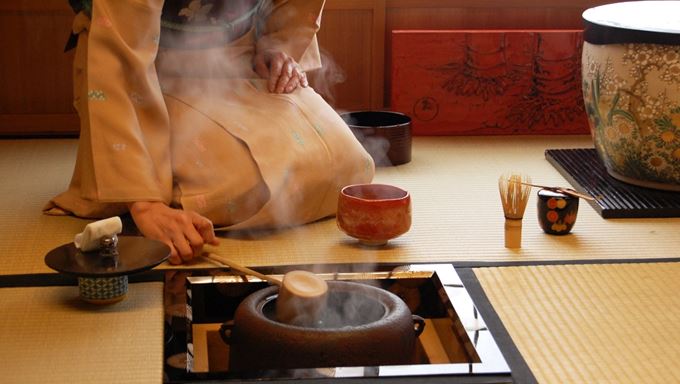 “Konnichiwa! Hajimemashite.” I was greeted in Japanese by a gentle old lady dressed in an elegant kimono, as she welcomed me into her beautiful traditional townhouse in Kyoto.

I was first ushered to a zashiki - a reception room with tatami mats and then to the main tea ceremony room, known as Chashitu. Like most travellers, I was euphoric and really looking forwarding to the unique cultural experience. As I entered through a low and narrow door, an unusual sense of calm enveloped me. It was as if I were standing in a place of worship.

The Japanese tea ceremony, locally known as chanoyu, is considered to be one of the three classical arts of refinement. The other two are kodo (incense appreciation) and kado (flower arrangement).

The history of tea ceremony in Japan goes back 1,000 years and the first mention of a formal tea ceremony can be traced back to the 8th century. However, powdered matcha tea was introduced in Japan much later in the 12th century. Deeply rooted in Zen philosophy, the ceremony focuses on the concept of ichi-go ichi-e, which means that each meeting is unique and should therefore be treasured.

The ceremony is based on the principles of harmony, respect, purity and tranquillity, and besides hosting and entertaining the guest with utmost grace and etiquette, the ceremony’s main purpose is to provide a deep spiritual experience through preparation and drinking of tea, and silent contemplation in harmony with nature.

Like most Japanese rituals, the tea ceremony is simple yet highly intricate. The beauty lies in the details for each and every element has a purpose and meaning; whether it’s the host’s gestures and movements, tea room’s décor and arrangement or the type of utensils used and the way they are placed. The nature of the ceremony depends not only on the season and time of day, but also on the occasion, venue and ranking of the guest.

Inside the tea room, my attention was drawn to the alcove with a hanging scroll and ikebana flower arrangement. Rest of the room reflected a very simple and minimalist décor. I was welcomed by the host, Aiko, with a silent bow and invited to sit on the tatami mat.

She then initiated a meticulous ritual that involved washing all the utensils, placing them in an exact arrangement and preparing thick tea, all done in a serenely graceful and harmonious manner. It was like watching an artist at work! The first part of the ceremony is formal and there is minimal dialogue between the host and the guests.

After exchanging bows, Aiko offered me tea in a beautiful ceramic bowl along with higashi - traditional confectionary. Being a complete novice, Aiko taught me the etiquette of handling the tea bowl. Like most objects, tea bowls have a front side, which is normally the side with a painting or design. It is customary for the host to offer the tea with the front side of the bowl facing the guest. Aiko asked me to pick up the bowl using my right hand and place it on my left palm.

She then asked me to rotate the bowl clockwise two times, so that I avoid drinking the tea from the front side of the bowl. The tea is drunk in 3-4 gulps. If there are other guests in the group, during the first part of the ceremony, all guests drink tea from the same bowl and each time the same etiquette is followed.

I had never tasted matcha before and was surprised by its creamy and frothy texture. Higashi balances the taste and cleanses the palate by cutting matcha’s slightly bitter aftertaste. When I finished the tea, Aiko asked me to rotate the bowl twice counter-clockwise before handing it back to her. She then washed all the utensils and left the room.

I found the first part deeply meditative and in my view, it is used by the host to demonstrate respect and also to create a relaxed environment. Aiko returned after a short while with more sweets and initiated the second part of the ceremony, repeating the same process of preparing and serving the tea.

Thick tea is replaced by thin tea and the second session is more casual and sociable. This time, all the guests are given individual bowls. It is customary for guests to compliment the host on various elements of the ceremony including the scroll and the flower arrangement at the start of the ceremony, tea during the ceremony and the utensils used towards the end of the ceremony.

I left the townhouse feeling a bit surreal. For me, it remains one of the firm highlights of Japan that is a true representation of this unique culture and society. Whether you are a tea drinker or not, I feel everyone should experience the Way of Tea at least once not only to understand the Japanese way of life, but also to experience pure devotion and the art of appreciating simplicity and nature. It is one of the experiences that will stay with you forever!