Shackleton Centenary Voyages – The Epic Journey of a Lifetime 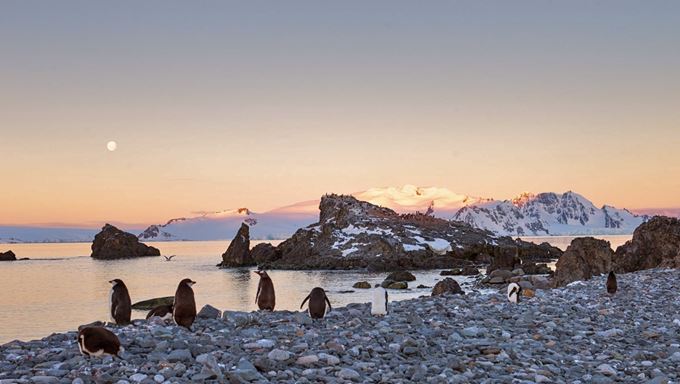 This coming Antarctic season (2016-2017) offers you the chance to immerse yourself not only in the incomparable beauty of Antarctica’s wildlife and spectacular landscapes but in the remarkable story of one of the most gruelling journeys and ultimately daring rescues in polar history.

Embark on a truly unique chance to travel to the southern islands and the White Continent in the company of some singular special guest speakers.

In August 1914, Ernest Shackleton and his expedition team set sail for Antarctica in the hopes of becoming the first to make a complete land crossing of the Antarctic continent.

Whilst sadly the team never achieved their original goal, the story of what happened next and how a great explorer ensured all his men returned home has become an epic saga of triumph over adversity and one of polar history’s most inspiring journeys.

On the centenary of the Imperial Trans-Antarctic Expedition, when the Endurance became fatally trapped in pack-ice, an expert team of six explorers, including Seb Coulthard representing the Royal Navy as expedition engineer, set sail in 2013 to recreate the iconic rescue mission embarked upon by Shackleton to Elephant Island and South Georgia.

They were determined to use only the same equipment, vessel, navigational aids and even clothing that Shackleton and his crew would have used. This journey became its own feat of endurance and was known as the ‘Shackleton Epic Expedition’, footage of which aired on the Discovery Channel.

Seb will of course be on board the recently refurbished Hebridean Sky on two select voyages in November 2016 and again in February – March 2017 where he will reveal the extent of this epic historical tale.

He will give guests the ultimate insider’s guide into just what it was like to undergo this harrowing journey. What made Shackleton’s epic feat even more miraculous was the fact that he ensured that each and every crew member made it home alive and well.

You too can explore the rich and incredible history and wildlife of the Falkland Islands, South Georgia and the Antarctic Peninsula in the company of some of the finest expedition leaders currently in polar waters, onboard a truly wonderful small vessel.

Visit some of the key sites from Shackleton’s historic voyage and experience the dramatic glaciers, ice cliffs and stunning wildlife of the southern islands and White Continent for yourself.

There are also two additional fascinating special guests onboard these two Shackleton Centenary Voyages. Angie Butler is the author of ‘The Quest for Frank Wild’, a biography of Shackleton’s right hand man, and is a seasoned Antarctic traveller.

Meet also Sunniva Sorby who made history in 1993 as one of four members of the American Womens’ Antarctic Expedition, being the first female team to reach the South Pole on foot without the aid of sled-dogs or motorized vehicles. Numerous other polar expeditions followed. Seb, Angie and Sunniva complement the extraordinary expedition leader team aboard these Antarctic voyages.

We think this is one of those extraordinary travel experiences that come up very rarely, and is an opportunity simply not to be missed! The voyage itself is the ultimate Antarctic experience with the very best and most incredible wildlife highlights.

The addition of these unique individuals on board the gloriously refurbished small vessel ‘Hebridean Sky’ will, of course, make it even more memorable. Whilst that may be incentive enough, as an added bonus for our valued clients travelling on these voyages we are also offering an exclusive extra service in Buenos Aires, the ‘Paris of Latin America’ before or after your voyage.

If you are thinking of travelling to Antarctica and would love to find out more about Shackleton’s awe-inspiring journey, then put the 14th July 2016 in your diary. Seb Coulthard has kindly agreed to be our guest speaker at an exclusive client evening on 14th July at the RAG Army & Navy Club in London.

We would be delighted if you could join us there. Perhaps you could contact us and let us know if you would be interested in coming to meet Seb and our team?