Next-level Namibia: Inside The Nest @ Sossus villa and the country's spectacular new lodges 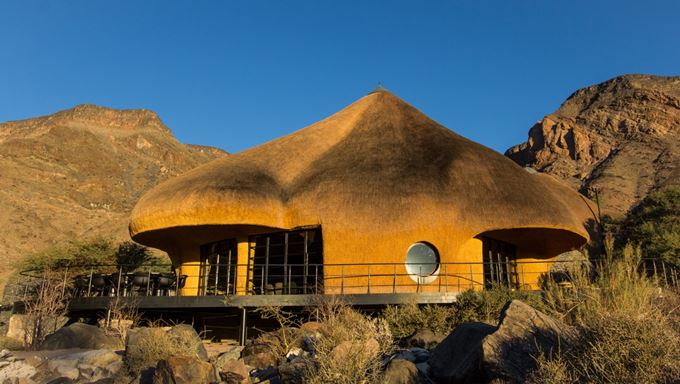 It’s a very good time to consider a holiday to Namibia. One of the least densely populated countries on Earth (second only to Mongolia), it last year attracted international attention with the opening of a spread of distinctive luxury lodges.

In summer, Shipwreck Lodge opened along the north of the Skeleton Coast National Park, an area about three-quarters the size of Wales to which only around 1,000 visitors are permitted annually. Its wooden cabins resemble old ships moored on the sands.

In Kaokoland, which borders Namibia's Skeleton Coast and Angola, Hoanib Valley Camp is enveloped by a crescent-shaped mountain. Guests might see Namib giraffes during excursions with lodge partners the Giraffe Conservation Foundation.

Elsewhere, Sossus Under Canvas opened on the 24,000-hectare Neuhof Nature Reserve, and 10-cabin Omaanda (part of the emerging Zannier Hotels brand that also incorporates Siem Reap’s Phum Baitang resort) opened on a 9,000-hectare reserve that can be easily reached by car from the capital Windhoek.

Now, The Nest at Sossus, a striking new exclusive-use villa with its design inspired by the communal nests of Namibia’s social weaver birds, is set to open within the country’s Namib Tsaris Conservancy.

Expected to welcome its first guests on February 1, the thatched property has been under development for the last eight years and is a unique addition to Namibia’s luxury portfolio.

The surrounding landscape is speckled with camelthorn trees and a waterhole stands near the property. Wildlife known to inhabit the area includes leopard, cheetah and spotted hyena.

Among the property’s staff (included in rates) are a chef and guide, who will be able to lead game drives around the locality and onwards to the Namib-Naukluft National Park, a 45-minute drive away. This is the gateway to the dunes of Sossusvlei and Deadvlei.

Bookings at The Nest at Sossus are subjected to a minimum three-night stay, and the property should pair well with other new arrivals scheduled for 2019.

In summer, Zannier Hotels will open its second Namibian property, Sonop. A tented camp set in the southern end of the Namib desert, it will comprise 10 separate tents, their design intended, says the Zannier team, "to resemble a refined British colonial experience of the 1920s."

In practice that means guests’ tents will include copper bathtubs and four-poster beds, as well as generous living areas with deep armchairs, writing desks and telescopes. Candelabras will light the dinner table, where white-gloved staff will serve elaborate multi-course dinners.

More modern amenities also feature, however, and will include a gym, spa and outdoor infinity pool. Game drives along Sonop’s 5,600-hectare private reserve might reveal brown hyena, jackals, kudu and leopard. Full-board rates at Sonop are expected to start from €560 (£495) per person per night.

Also set to attract attention is Sossusvlei Desert Lodge, which is currently closed for a rebuild and will reopen on October 16, with full-board rates starting from NAD9, 265 (£520) per person.

The property will re-emerge with a distinctive jagged silhouette - with a touch of Frank Gehry about it - and will incorporate a range of creative dining areas so guests need never dine in the same place twice, along with an expansive wellness centre. Bedrooms will feature outdoor showers and skylights over the beds.

Beyond the property’s grounds, the sand dunes of the Namib Desert can be explored by fatbike and quad bike or seen from above by hot air balloon. Aged San rock paintings can also be visited and the lodge makes the most of its position in one of the world’s few Dark Sky Reserves.

There’s a private observatory on site and couples can take in the dazzling constellations with the guide of the lodge’s astronomer.

The Explorations Company offers a five nights at The Nest at Sossus, including internal flights to and from Windhoek international, from £8,180 per person (four sharing).

The Explorations Company can tailor-make itineraries that combine a range of Namibian properties and experiences.