Discover and help save the lost chimps of Uganda's Kyambura Gorge 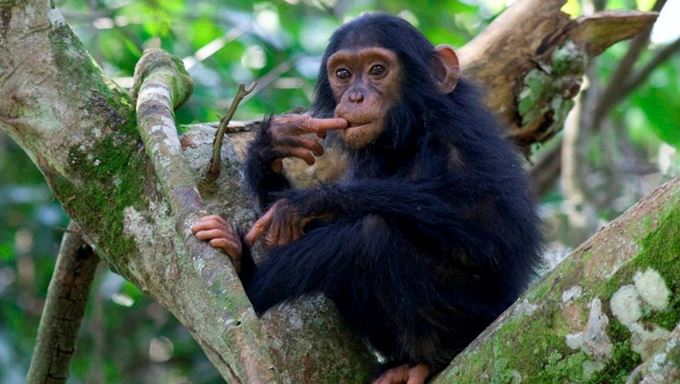 Track the lost chimpanzees of Kyambura Gorge on your safari to Uganda and in doing so, witness their conservation efforts and directly contribute to their ongoing survival.

The 13km long Kyambura Gorge houses a mystical and ancient sunken forest, with a river running through it. Here it is possible to track the ‘lost’ chimpanzees of the gorge and witness their interactions in person. Chimpanzee tracking is active and exciting as they move through the trees above your heads. This is a perfect addition to any gorilla trekking safari to Uganda!

One begins the tracking by descending into the gorge, and then following the river through the forest, crossing bridges where they occur, looking for the chimpanzees. Once you find them you will have the opportunity to take photos and watch the chimps interacting with their group. Within the gorge you may also see other primates such as Colobus monkeys, olive baboons, red tailed monkeys as well as various forest birds beautiful and diverse flora.

Why is Conservation at Kyambura Gorge So Important?

Kyambura Gorge Lodge along with its parent company are actively seeking to conserve the chimpanzees of Kyambura Gorge. These chimpanzees, like many vulnerable species across Africa, are at risk from human encroachment which has led to habitat destruction. The small patch of ancient rainforest in which they reside was once part of rainforests that stretched across much of equatorial Africa. Now, the Gorge has been isolated from the rest of the forest by human habitation and this means that the remaining 27 ‘lost chimpanzees’ are cut off from the jungles of Queen Elizabeth National Park.

This is detrimental to the chimp population. They are a very social species and it is unusual to find them in groups this small. They also suffer from reproductive isolation which will result in inbreeding and makes them more vulnerable as a population to infectious and genetic diseases due to a reduced gene pool. Eventually the Kyambura Gorge chimpanzees will become extinct if they cannot find a way to increase their population size or unite them with a larger population.

Praveen Moman who owns the lodge is an enthusiastic conservationist and believes that the only way to save the vulnerable species in Africa is if local communities are involved and working towards the same goals.

The Lodge has been instrumental in launching the Kyambura Gorge Eco-tourism Project, an initiative which links the Gorge to the community and uses sustainable tourism to drive conservation forwards. The local community benefit from a range of projects which include:

The Eco-tourism Project has created a buffer zone around the gorge to provide separation between the Gorge rainforest and the inhabited land. This area is currently 3km wide on the northern side of the gorge in which the project, along with volunteers and community support, has planted over 3000 indigenous trees. Guests can also take a guided walk of this area and assist by planting seedlings themselves.

Where is Kyambura Gorge Lodge Located?

You can stay at the eclectic Kyambura Gorge Lodge on your safari to Uganda and take part in the chimpanzee trekking experience. The lodge is contemporary in style and located on the edge of Queen Elizabeth National Park. From the lodge one can see the stunning views of the savannah as well as the Mountains of the Moon (Rwenzori Mountains).

What activities are available at Kyambura Gorge Lodge?

One can take game drives in the Queen Elizabeth National Park, one of Africa’s most varied parks in terms of different habitats. Spend time spotting over 600 different bird species and other wildlife which often include lion and large herds of Uganda kob. This landscape is one of the most important areas for avian, primate and wildlife biodiversity in Africa.

We also highly recommend visiting one of the community projects supported by the lodge such as a women’s coffee cooperative, wetland reclamation project or traditional dance group performance. Another highlight is to take a cruise on the Kazinga channel flowing between Lake Edward and Lake George. Here you may see hippo (this has some of the greatest concentration of hippo in Africa), herds of elephant who come to the river for a drink and other creatures such as buffalo.