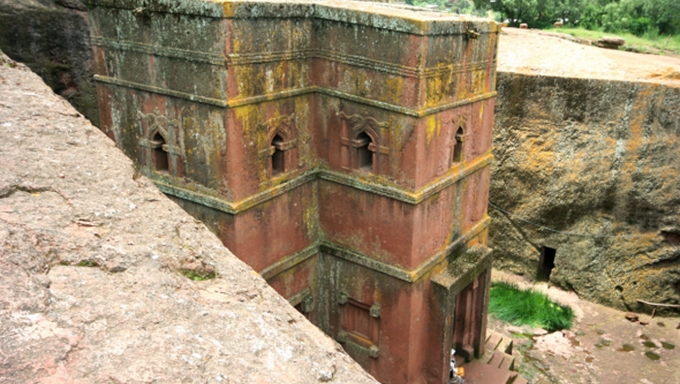 With Rock hewn 11th century churches and known as the eighth wonder of the world, Lalibela should always be on everyone’s list to visit when in Ethiopia. The town of Lalibela is actually a small isolated town that sits at an altitude of 2,630m amongst magnificent mountains and valleys.

Lalibela is remote but accessible by air and a couple of roads. It is a monastic settlement and home to extraordinary carved stone churches that are still actively used every day and they represent a way of life and people that barely seem to have changed for centuries.

Although the age of the churches is not known exactly, they are thought to be dated around the 11th to 13th century, the exact date not really known, nor who actually built each, though King Lalibela must have built some, maybe others during the Axumite kingdom reign, whilst another was possibly built as a memorial to her husband by Masqal Kibra, Lalibela's queen.  Eleven churches of Lalibela are covered under the mantle of a Unesco World Heritage Site.

The stone churches with their Coptic designs lie below ground level and fall into three groups. Tours taking a full day generally manage to just about cover them all. Each is completely different, each has its own history, painting and murals, wooden doors and huge drums and access between each is also different – some through tunnels, some over ground, some down narrow deep passages.

Ancient wooden doors led into dark churches that have not changed at all since they were first carved.  Prayers are called by Orthodox priests in white flowing robes summoning the holy and devoted amidst tolling bells, chanting and drum calls. This experience is completely and utterly mesmerising, incredibly enthralling, calming and captivating at the same time. The atmosphere completely holds you.

The Northern Group includes Biete Medhane Alem which is a very large monolithic church and where the Lalibela Cross is kept. Other churches include the resting place of King Lalibela - Biete Goltgotha Mikael and Biete Maskel and Biete Denagel.

There are five rock churches in the eastern group of churches including the church of Biete Gabriel-Rufael – which is said to have possibly been a former palace and is the church of angel Gabriel and Raphael.    There is also Amanuel, Biete Qeddus Mercoreus and Libanos.

Separate and sited away from the linked churches stands the iconic and much photographed Biete Giyorgis – the Church of Saint George – extraordinarily well preserved, visitors can walk around the top of the church looking down into the well surrounding it. Cut into the sides of the stone walls are small human sized cavern where pilgrims are often seen resting. Some are already occupied – by skeletons!

There are other monasteries further afield including Ashetan Maryam that are also well worth visiting. The churches of Lalibela are different to those in northern Tigray as the later have been carved into the sides of mountains and even on the top of rock domed hills - some only accessible if you are an experienced rock climber. One wonders how they were ever carved in the first place as they are a feat of human endeavour considering these are dated to the very earlier 4th-7th century – all totally awe inspiring.