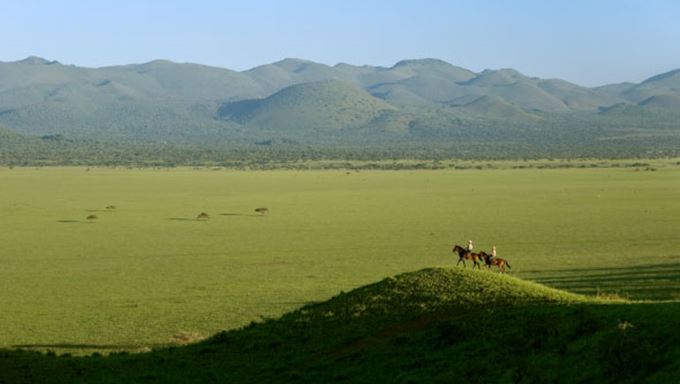 Kenya offers some of the very best horse-riding safari holidays in the world! For the ultimate Rolls Royce wildlife riding safari, ride in the Masai Mara during the wildebeest migration!

The wildebeest migration takes place from July to October in the Maasai Mara. These riding safaris are for seven to ten days. The first seven nights are spent in the Maasai Mara moving from camp to camp, and your accommodation is in a comfortable tent with adjacent short-drop loo and steaming hot bucket showers. The last two nights are spent at a glorious colonial homestead, where there is a cross-country course, a polo field and general riding opportunities. This is one of the most fabulous safaris ever and considered to be Africa's top wildlife riding safari. You can also spend time game viewing in the late afternoon in the Masai Mara. The horses are thoroughbreds and beautifully schooled. Riding is either in Western or English saddle.

There is also a Laikipia safari, which is a different region, offering diverse game which is not as concentrated as in the Mara - but they have several species which are only found north of the equator, such as the Grevy’s zebra, gerenuk and Somali ostrich, (although this is an area that is generally less rich in game). Here you spend eight nights at a number of private safari camps throughout the area, with the last two nights spent at a homestead. The horses are thoroughbreds or thoroughbred cross, and these exclusive safaris are suited to the more experienced rider who is comfortable at all paces, including galloping should one need to react quickly. One generally spends between four and six hours in the saddle.

Then we have an amazing ride in the stunning region of Amboseli with the backdrop of Mount Kilimanjaro. We also offer riding where one gets to stay at traditional, characterful homesteads in Lake Naivasha and at several ranches in the Laikipia area, with the opportunity to fly camp out for a couple of nights.

For those wanting just a few days’ riding, there is a magnificent lodge with views over Mount Kilimanjaro, where one can ride each day, staying at the lodge, or even venturing for a night or two fly-camping, which we can thoroughly recommend! There are lots of lodges in Laikipia which offer riding from them – either riding out during the day and returning to the lodge where you can sleep in wonderful comfort, or where you can fly camp for a night out beneath the stars! Just call us and we shall recommend the ideal riding safari for you!

With first hand riding experience and 25 years of arranging the finest bespoke riding safaris in Africa, we are perfectly placed to help you!