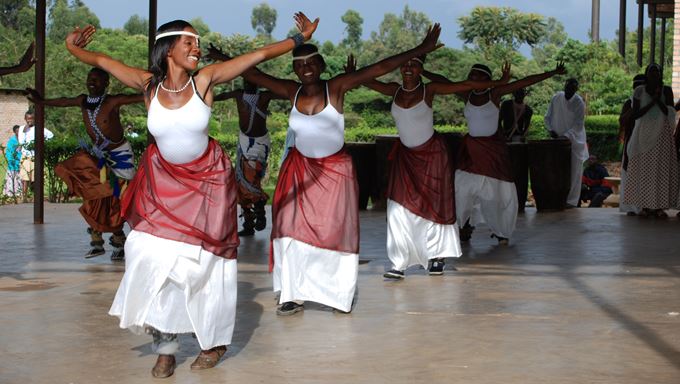 There are also many species of birds found in Nyungwe including the Ruwenzori turaco, Lagdens bush shrike, Fraser’s eagle owl, Ruwenzori batis, red-faced woodland warbler and mountain masked apalis. About 52% of all of Africa’s birds are found in the Albertine Rift of which Nyungwe is the largest protected area within the Rift.

There is a great deal of interesting culture in the Great Lakes Diaspora region of Rwanda. Basketware is the most notable craft in Rwanda and there are many wonderful local markets in Kigali as well as craft stalls and shops to find them.

One of the most well-known is Caplaki which is a collection of almost 40 individually owned stalls. There is a wonderful mélange of craft ware on display here – masks and carvings, baskets and handicrafts, beautiful painted and embroidered cloths, jewellery  and banana fibre goods made in Rwanda and the neighbouring DRC.

There is yet another curio market area with around 20 stalls found in the Belvedere bus area. Other craft centres include Ivuka Arts Centre- mostly showing contemporary crafts, the Kimironko market, Ishyo Arts centre a nonprofit mainly musical organization, and Rwanda Nzizia Fair Trades Artist’s Association. Kigali is an interesting town, with many women walking around in colourful, local hand printed fabrics.

Most of the crafts and curios are made by women and there are some NGO organisations that specifically were set up to support a living for genocide survivors.  These crafts are very good quality and are exported around the world and include many beaded items such as pens and earrings. The funds generated support their children in going to school and improving their lives.

Pottery, basketry, paintings and wood carvings are made by a very diverse group of people whose lives are steeped in tradition and culture, and are very different to some of our western cultures.  Kigali is a melting pot of culture.  Rwandan culture has certain traditions and taboos very different to our own. For example it has been considered extremely rude to eat in public amongst strangers and even in front of one’s own children.

Nowadays with the numbers of tourists and western infrastructure increasing all the time, of course hotels and restaurants are opening up to cater for visitors so it is becoming necessary to eat in public! As with most African culture, women tend to wait until the man has taken his food before serving themselves.

The Rwanda peoples are made up of Hutu (vast majority), Tutsi and Twa (aboriginal pygmy people).

Like most of Africa, religion plays a very important part of the culture; about 50% of the population is Roman Catholic, about 25% protestant followed by smaller numbers being Seventh day Adventists, Muslim, Baha’i and a percentage practicing traditional beliefs. Many people still have strong beliefs in spirits and curses and traditional healers and sorcerers are still sort after for traditional medicines.