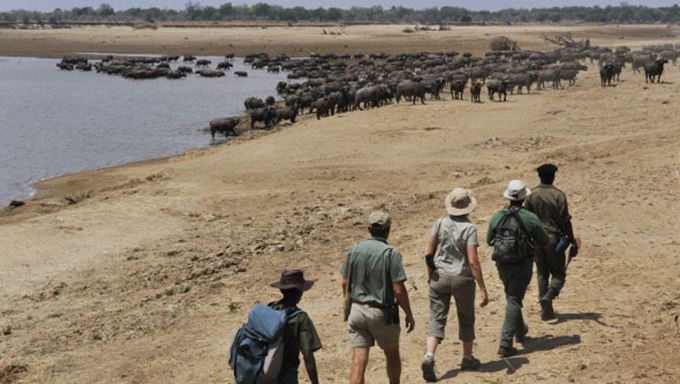 For those searching for the parks of old Africa – with large herds of wildlife and very few tourists in a pristine environment, Zambia’s North Luangwa Park lies an hour’s flight north of its larger sister park (South Luangwa) and is rich in game and bird life.

The park was initially proclaimed a game reserve in 1938, subsequently and finally becoming a national park in 1972. The park covers 4636 square kilometres of pure and unspoilt wilderness.

The small Mwaleshi River runs through the park with clear and very shallow waters and low banks whilst the Luangwa River flows down the eastern side. To the west of the park lies a gorgeous area to walk complete with denser forests and a waterfall.

The North Luangwa National Park is all about walking safaris, essentially the only activity on offer. Spending time on foot with a knowledgeable guide is one of the best and most profound wildlife experiences; you use all your senses and feel far more in tune with your environment.  Without doubt this is a highlight of a safari, spending a few nights without phones, vehicles and humanity, just you and the sounds of nature.

Animals gravitate towards the river and it is common to see buffalo, lion and hyena in healthy numbers by the water’s edge.  Wildlife found in the park includes Cookson’s wildebeest, Crayshaw’s zebra, leopard, buffalo, and antelope.

On one of our visits to the North Luangwa, we walked along the banks of the river until a small herd of elephant emerged from the forest. Sitting quietly we watched as the elephant family surrounded us and drank for 30 minutes, finishing off with a spray shower, babies paddling and splashing before moving off again! Seemingly, as we were already positioned and not moving, they were oblivious to us. This was truly a memorable moment in the Zambian bush and that’s what North Luangwa is all about, the unexpected, the absolute and ultimate safari.

The carmine bee-eaters arrive in August through September and stay until the end of the year, they make a stunning scene as they dart in and out of the river banks with their brightly coloured plumage.

Each day you rise at sunrise, stir yourself awake with a tea or coffee and muffins around the campfire before embarking on your dawn walk. Perhaps you may come across a nocturnal animal making its way back to its den such as the shy aardvark.

Your guide will teach you about the many facets of nature and how it exists in this remote bit of paradise.  Follow and listen to bird song, learn to identify tracks, how old they are and learn to recognise and see why the animal you are following stopped at a certain point, what it ate, what its movements were and the direction it was now heading.

This is equally learning about the smaller species that co-exist in this fragile eco system, their symbiotic relationships with the environment and their vital roles which make it complete. This park is a gem and one that should not be missed!