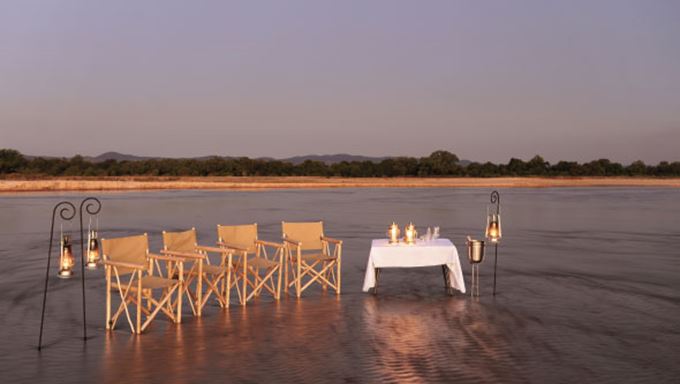 Covering an area of 9000 square kilometres, the South Luangwa Valley is one of Africa’s untouched and wild wilderness areas. The western side of the park remains to this day as mostly unexplored with few roads, with miles of wild terrain and no safari camps or lodges.

As the river runs along an almost flat landscape, oxbow lagoons are formed as the river changes over time. These lagoons are magnets for water birds and attract shyer animals to small pools to drink, rather than having to venture to the main river which is home to many hippo and huge crocodiles.

Riverine forests give way to woodlands, floodplains and grass savannahs as well as occasional magical ebony forests. Here one finds large concentrations of game including elephant and Cape buffalo, (herds of a thousand strong buffalo are fairly common, especially in the driest time of the year) and leopard.

The Luangwa River has one of the highest concentrations of hippo in Africa and pods of 50 strong living close together in bends of the Luangwa are normal. There are a few safari camps that have erected hippo viewing hides right on the edge of the water – this is probably  the first time when a visitor has to change down their camera lens size, in order to fit in the hippos!  No telephoto lens required here!

The South Luangwa is covered with alluvial soils and pristine riparian forests and the landscape is further added to with the magnificent species of giant mahogany, mopane and the iconic sausage trees with their huge and heavy sausage pods. The miombo woodlands include winter thorn, marula which produces fruit sort after by all animals (and is the basis for the alcoholic drink Amarula), vegetable ivory palm trees, tamarind and acacias including leadwoods.

South Luangwa is most well-known for its walking safaris led by some of the finest guides in Africa. This is certainly one of the best ways to discover the bush exploring it on foot with knowledgeable guides and scouts. Game drives are possible in almost all camps and in the evening, spotlight safaris are in open vehicles picking out the nocturnal animals such as owls, nightjars and genets, leopard, porcupine and civet.

Do look out for bush babies that can be seen bouncing through the trees. We have also seen spotted hyena and white-tailed mongoose on these drives. The park has one of the highest concentrations of leopards in Africa.

The elegant crowned cranes strut around with their golden tufts showing off as they congregate in large flocks at the salt pans – the Luangwa simply has wildlife for everyone! Contact us to begin your safari to Zambia.

Click here for more information on walking safaris in Africa >