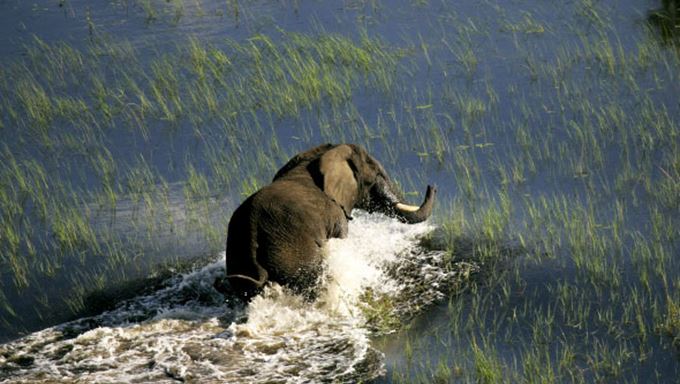 The Busanga Plains consist of natural and beautiful open wilderness and are located in northern Kafue National Park. Best visited and accessible between July through November, these stunningly beautiful pastel coloured plains are water logged for most of the year. The wetlands of the Busanga Plains are fed by Lufupa River which is a tributary to the Kafue River.

Often referred to as a mini Serengeti, as wildebeest can be seen here due to the flat and open plains, as well as large herds of zebra. This region is unlike any other in Zambia and is fantastic for both wildlife and birdlife. There is a truly beautiful, luxury camp here as well as some excellent bush camps offering all the comforts that one could want!

One predator sometimes seen on the Busanga Plains is the cheetah – which is not seen in the Lower Zambezi or South Luangwa. Kafue and Busanga provide the type of environment perfectly suited to their hunting habits – open plains with just the right amount of tall grasses and short thickets, perfect for sneaking up on puku and impala, a staple diet for the cheetah.

Bird watching on the Busanga is wonderful – kingfishers, Pallid and Montagu harriers, water birds of all kinds – herons and pipits, drongos and fly catchers. Birds of particular interest include the pink throated long claw. It is the birdlife in Busanga that entices bird watchers – herons and egrets, flocks of crowned cranes and endangered wattled cranes strutting sedately across open grass plains.

Over 500 species have been recorded here and huge flocks of open billed storks congregate as well as comical white pelicans.   Over the open plains one can see African Hawk eagles and black chested snake eagles as well as racket tailed rollers. In the woodlands surrounding the plains the chirping white helmet shrikes and Arnot’s chat are some to look out for.

Dotted and reaching up from the plains are termite hills, small well ordered farms with intricate systems.  Termites become food for aardwolf and other mammals but also for raptors as they emerge at the first rains.

Lechwe and puku are found on the plains – keeping a wary eye out for lions as well as African Hunting dog - an endangered species and Busanga and Kafue in general has one of the healthiest populations of wild dog in Zambia. The black maned lion can be seen here in good numbers too.

The dambos – seasonally flooded areas are a characteristic feature of Busanga and they provide rich food during the drier months.  The wildlife is diverse and there are unusual species here including aardvark, honey badgers and civet and then other delights such as the rare pangolin, gorgeous bush pigs, bouncing spring hares and smaller predators such as caracal and otters.

Grysbok and oribi are found in the miombo. In swampy areas hippo and basking Nile crocodiles are be found in good numbers on the sand banks. There are otters and African Skimmers too with their red bills – the lower mandible being much longer than the top.

From one of the camps within the plains, visitors can during certain months of the year, hot air balloon over the plains. Truly this is one of the best and most unforgettable safaris one can do - image floating almost silently at dawn over grasslands, getting a totally different perspective. As the dawns mist rises and evaporates, the colours change from dark purples to the lightest mauves and then golden yellows.  Finish your hour’s slow flight with a champagne breakfast.  What a why to start the day!

For a truly special safari, one should always include the Busanga Plains.

Pictures by courtesy of Will Burrard-Lucas – Wilderness Safaris