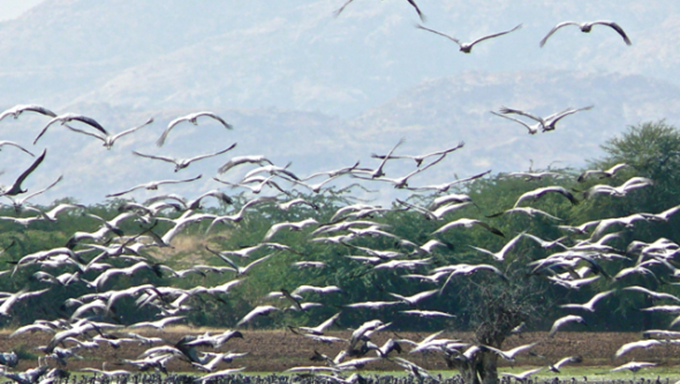 Their breeding grounds are in Central Asia and the bulk of the population flies south to north western India congregating in vast flocks of 1000 - 3000 birds in the desert edged arid lands of Rajasthan and Gujarat with smaller groups spread across northern and central India.

When it comes to bird conservation against all odds, few can match the spirit and generosity of the residents of the small hamlet of Khichan which is 140 km west of the "Blue City" of Jodhpur renowned the world over for its palaces, forts, temples and local bazaars.

Migratory Demoiselle Cranes, so called because of their delicate and maiden-like appearance, flock to this sleepy village, tucked away in a corner of the Thar Desert, in huge numbers in the winter months making for an amazing spectacle. In the evenings as the cranes fly back to their resting grounds, the sky can darken and the air reverberates with their trumpeting call and the rush of air through curved wings as the glide in to land. 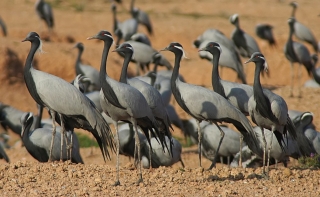 Initially, some 45 years ago, there were just about 100 of these cranes. Then a gentle soul, Ratanlal Maloo, returned to his home village from his work place in another state and along with his wife took to feeding sacks full of grain to birds (all kinds), believing it to be his duty as a devout Jain.

Word must have spread among the Demoiselle cranes in Mongolia and Eurasia, the lands of their birth that a feast awaited them in this nondescript Indian village and the number of these migratory birds thronging the village in October to March increased steadily every year, until their number touched a staggering 15,000 within two decades. 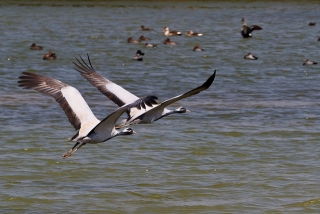 As the number of Demoiselle cranes increased, the couple got assistance from some volunteering school children. The village, tucked away in a corner of the Thar Desert, still plays host to over 9,000 Demoiselle cranes every winter. The bond of the villagers with these avian visitors touches a chord among even the most cynical tourists.

These cranes make one of the toughest migrations in the world by crossing the Himalayas and have literally changed the landscape of Khichan. The once obscure village has now become one of the most favoured bird-watching vacation hotspots in India. The village, even achieved international recognition when it was featured in the Birding World magazine in an article titled, “Khichan - the Demoiselle Crane village".

Any bird-watching tour to Rajasthan loses luster without a glimpse of Khichan’s winged royalty feeding right in the midst of the human settlement. Even veteran bird-watchers and ornithologists, familiar with congregation of various species of birds in different parts of the world, affirm that the congregation of Demoiselle cranes in Khichan is the most dramatic congregation of the winged beauties they have ever seen.

Up to 5,000 kilograms of bird seed are consumed every day by the birds. This feeding of birds by the villagers is based on sound ecological logic, too. As the cranes get to satiate their hunger pangs in the feeding home, they don’t ravage the crops in the region, thereby averting a potential conflict with humans. The

Demoiselle cranes complete their early morning feeding and then alight on the sand dunes in large numbers. They face the sun, their tie-like black chest feathers contrasting with the blue winter sky. A short while later they depart in different directions in small family flocks. Once in the air they immediately form a disciplined order led by the female, followed closely by up to two sub-adults, brought up by the male and start calling.

The mid-day sees them collecting for a short drink, punctuated by an occasional bath or an acrobatic, almost ballet-like, displaying of mutual affection between couples, a sight to behold.

Bird-watching buffs can feast on these and other spectacular sights during the winter months. Besides these dainty cranes, grey heron, great egret, northern pintail, northern shoveller, black winged stilts, Temmick's stint, tufted duck, spotted redshank, common redshank, common sandpiper, rock pigeons, white- throated kingfisher, Indian pond heron and other species of birds can be sighted at Khichan especially around the village pond which forms one of the few sources of water in this arid land.

How? Stay at a wonderful boutique hotel in Jodhpur at the foot of the Mehrangarh Fort and travel out to see the cranes.