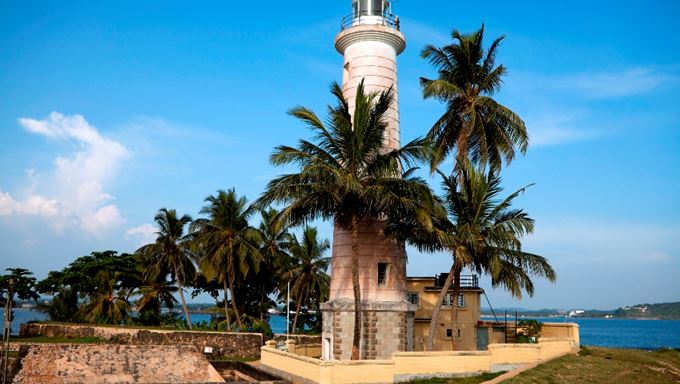 Galle Fort is quite simply a unique place. This UNESCO World Heritage Site, founded in the 16th Century by the Portuguese and extensively fortified by the Dutch in the 17th Century, is nestled in the south west of Sri Lanka, around two hours from Colombo by road or a short hop on the seaplane taxi.

The Fort itself juts out on a promontory and is flanked by the Indian Ocean on the three sides, giving it a rather dramatic setting. The Dutch buildings are very pretty and the distinctive red rooftops contrast beautifully against the whitewash of the buildings.

The fort is a wonderful place to stay for at least a few nights and there is plenty within the walls to keep inquisitive minds busy. A private tour with a guide can be arranged but many choose to explore independently too.

Within the walls one can visit the Dutch Reformed Church, an eclectic collection of artefacts (also available for purchase) housed in a restored Dutch House as well as more formal museums and the landmark of the Dutch Hospital.

Also worth a visit, if not staying there, is the hotel Amangalla, which played a significant role in the history of Galle from the late 17th Century through to the 20th Century.

It then slowly fell into decline as a building before being lovingly and extensively restored by the Aman group who reopened its doors in 2004. A lovely place to sit on the terrace and watch the world pass by with a drink in hand.

As the evening approaches and the heat of the day eases off, a lovely option is to head for the walls of the Fort and take a stroll along with the locals, culminating in viewing the sunset. Along the way you will see the main gate – a relatively recent addition by the British in 1873, the old gate, the bastions, the famous Galle Lighthouse and Flag Rock.

Galle is also home to what is considered to be one of the most picturesque cricket stadiums in the world and the Sri Lankans do love their cricket! As well as being famous for cricket, Galle is also extremely well known already for the Galle Literary Festival.

The event takes place in the beginning of the year and not only does it attract some seriously big names from The Arts to take part, but is also renowned for its all-round appeal and superb ambience with the accompanying events suitable for those interested in more than just reading!

By day Galle is a buzzing town with visitors mingling in alongside residents, tuks-tuks and antique cars on the narrow streets with their colonial mansions. Somehow the town has managed to avoid thus far the ruin of any sort of modern developments and therefore retains a unique old-world charm. A real highlight of a holiday to Sri Lanka for those lucky enough to visit.