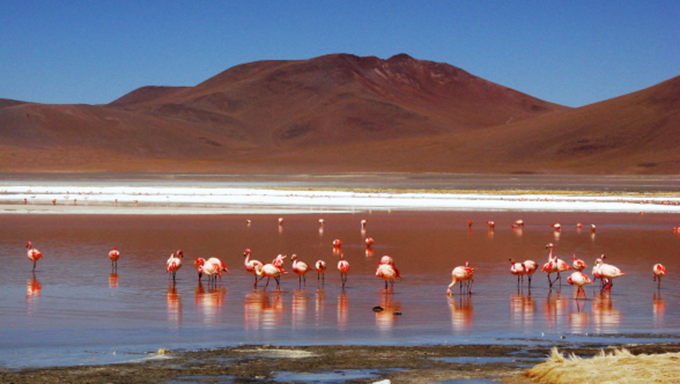 The vivid hues of the Atacama Desert are spectacular, especially at sunrise or sunset: a unique dazzling landscape of rolling sand dunes, mineral salt lakes and high volcanic peaks leading into the Andes.

The vivid hues of the Atacama Desert are spectacular, especially at sunrise or sunset: a unique dazzling landscape of rolling sand dunes, mineral salt lakes and high volcanic peaks leading into the Andes.

This is one of the driest places on Earth, where rains have not been recorded in parts since records began. The only exception to this being the strange phenomenon of the flowering desert when occasional flash floods mean the terracotta hues of the desert plains suddenly burst into purple and yellow bloom around September – October, although it is hard to guarantee a sighting as it occurs only in years with unusual high rainfall.

The wildlife you find here is hardy and very unique from curious small vizcachas hiding among the rocks to rare species of flamingos, such as James flamingos, which feed in the mineral-rich lakes of high altitude salt flats nestled on the border with Bolivia and Northern Argentina.

As you explore this magical region either on foot, by bicycle, jeep or on horseback, you will feel that you are in another world that could not be further removed from the glittering glaciers and blue lakes of Torres del Paine and Patagonia in southern Chile.

In the Atacama Desert, bathe at dawn in thermal waters close to dramatic geysers before an impromptu alfresco breakfast. Hike through canyons and across narrow riverbeds filled with bulrushes or sip a delicious cocktail after a leisurely cycle ride to the cool waters of a nearby mineral lake. Explore historic villages, mining ghost towns and ancient petroglyphs as you delve into the history of this northern region.

The desert skies of the Atacama Desert offer the very best conditions in the world for stargazing. The northern skies are considered some of the clearest in the world, evidenced by the international observatories here as the dry air and absence of light pollution make conditions just about perfect. Do some stargazing of your own from an observatory in the desert with an astronomer.

If you want to be even more adventurous, take a private hike through the desert with llamas, meeting people from local communities or try a self drive itinerary incorporating Atacama with Arica and Lauca National Park for some spectacular bird-watching. Whatever your wishes on how to experience this truly unique and special region, we can arrange just the right itinerary for you.