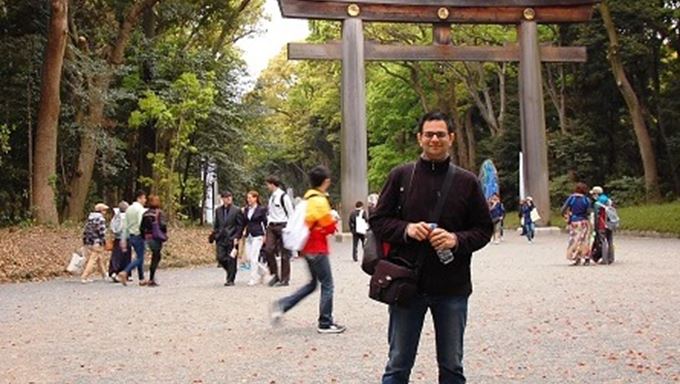 Chinmay was born and brought up in Ahmedabad, India. He developed a keen interest in travel at an early age as he accompanied his father on archaeological expeditions across Gujarat and Rajasthan. As he grew up, various trips further afield turned his interest into a passion and he decided to pursue a degree in travel and tourism.

After a short stint as a French language instructor and interpreter, Chinmay assisted in running of a heritage hotel in Ahmedabad and also developed various travel products for the hotel’s in-house guests before moving to London to work for a prominent travel company.

Over the years he has explored many countries including China, Japan, South Korea, Vietnam, Laos, Cambodia, Myanmar, Thailand, India, Nepal, the UK, parts of Europe and the USA. One of his childhood memories is going on a safari with Jam Saheb (Maharaja of Jamnagar) in his private bird and wildlife sanctuary and being slobbered by a giant nilgai!

In China- hiking on the Great Wall, seeing pandas in Chengdu, Terracotta Warriors in Xian, exploring centuries-old villages in the Yunnan Province, walking to the base of the Tiger Leaping Gorge, cruising on Li River along the spectacular karst landscape, hiking through the famous Dragon’s Backbone Terraces in Longsheng County and walking on the Bund in Shanghai taking in the dazzling city lights.

In Japan- travelling on the Bullet Train, cherry blossom, witnessing a traditional wedding at Meiji Shrine in Tokyo, taking part in a tea ceremony and exploring serene temples of Kyoto.

In South East Asia- stargazing in Nong Khiaw and charming architecture of Luang Prabang in Laos, cruising on the Mekong in search of the endangered Irrawaddy Dolphins and the majestic temples of Angkor in Cambodia, coastal drive from Hue to Hoi An in Vietnam, sunset over Inle Lake in Myanmar, dining at Sirocco at the Tower Club at Lebua in Bangkok- one of the highest rooftop restaurants & bars in the world!

In India & Nepal- paragliding over Phewa Lake and taking the Mt. Everest flight in Nepal, exploring the mangrove forests of Sunderbans National Park in West Bengal where most tigers have turned man-eaters, following a tiger in Kanha National Park, sundowner in the middle of the desert in the Little Rann of Kutch, cruising on the backwaters of Kerala, visiting remote tribal villages in Orissa and Chhattisgarh, riding a bamboo raft and hiking in Periyar Wildlife Sanctuary with an expert guide and exploring the ruins of Hampi and Badami.

Other regions - dune bashing in Dubai, camping by the lake in a national park in the USA and watching the Northern Lights in Iceland.