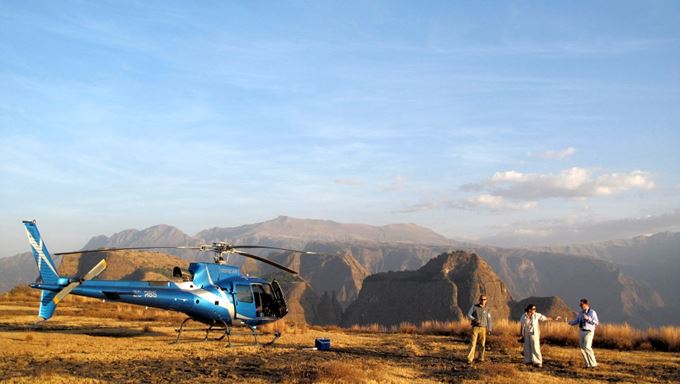 Why is a flying safari the best way to travel in Africa?

Not only do flying safaris give you all of the stunning visual delights of seeing the area from the air, but they make good sense. I prefer flying between locations on my safaris to Africa as it means that I am transferred to the next point of interest quickly, allowing me to make the most of my time on safari.

It’s perfect – as one doesn’t get involved in huge queues – rather just sailing through customs and immigration whilst watching everyone else queuing up endlessly! But it’s also about landing directly at the places I want to be – again, not wasting time.

Flying safaris over Africa are not just about transferring efficiently though. The huge benefit is the views, and on a private flight, just for you and your party, one is able to view the area of interest from above before landing and exploring in more detail. The pilot is also your expert guide on the ground so you gain from his knowledge too, giving you a much better understanding of the area.

Finally, private flying safaris allow you to traverse the most remote and pristine regions of Africa, those where larger airlines cannot reach and driving overland would be onerous, or even impossible!

So whether you choose to fly in a fixed wing aircraft or a helicopter (which does give greater visibility), depending upon the distance, the choice is yours!

These are my top three flying safaris in Africa, where you fly not just in order to move between locations, but because the aerial experience is part of the safari, too!

1. A collection of the best Flying safaris in Africa by fixed wing

First up, a collection of all of my favourite flying safaris, those that give you the best and most life-changing experiences in Africa, in the most remote locations. You travel by fixed wing aircraft on an entirely private journey:

- Starting your safari in Chad and the lovely Zakouma National Park

- Flying on to Rwanda, where you can go gorilla trekking in the Parc des Volcans

- Your fixed-wing then takes you to Tanzania and the Serengeti to witness the wildebeest migration on a private concession abutting the Serengeti, where over 2 million animals fill the plains as far as the eye can see

- Travelling then to southern Tanzania and Ruaha – one of the most beautiful and game rich regions of Africa, where 10% of the entire lion population in Africa reside.

This is the ultimate safari in Africa, visiting the most pristine regions which are still the best kept secrets and allowing you to see not only incredible cultures but also the best wildlife that Africa has to offer.

Most of all – it is private – so whether it is staying in your camp in Chad, or at Kichaka Camp in Ruaha or seeing the migration, it is just you and your travel companions, with the freedom to do entirely as you please. Even gorilla tracking, which is normally done in groups of six to eight people, can be arranged to be closed so that it is only your own group.

Why are these the best of the best?

Let me tell you more about Zakouma National Park. Although I come from Africa and have spent the last 28 years traversing it, this must rate as the finest wildlife area I have ever encountered!

Where one can listen to the sound of lions roaring EVERY night, where one can stumble upon leopard whilst on foot, and where thousands of red billed quelea take to the skies, whilst being dived upon by the yellow billed kites.

Then there are the cranes – around 2000 of the 4000 that exist in Africa, all converging on the lake in front of you. And the pelicans, the open billed storks – you name it, it is all offered to you in huge numbers.

Zakouma has fabulous elephant populations and even black rhino. The best bit is that this is part of African Parks, a successful NGO initiative, so your visit makes a big difference and allows the park to be financially viable. You can also have the opportunity of visiting their headquarters and understanding more about their stringent anti-poaching regime which is nothing short of supremely impressive.

Perhaps visit the markets one day, where nomadic traders arrive with their Bedouins on top of their camels, to trade for the day. But the one thing you are aware of is that it is just you, or your group, with no other tourist face in sight. And that is what makes it so incredibly special!

The safari in Tanzania’s Ruaha National Park is based at the Kichaka camp. This is owned by Moli and Noelle, hosts extraordinaire and Moli is quite simply the finest walking guide in Tanzania!

Here you are away from any other camp in the Ruaha – where wildlife viewing is second to none, and you can walk out and game drive should you wish, each day – with the possibility of fly camping and walking from camp to camp en route. One learns so much more on foot and it’s a far more immersive experience.

Second is a helicopter safari in Ethiopia. This is a private safari with a wonderful guide and helicopter guide, Ben Simpson.

I think this is absolutely the finest way of seeing this extraordinary country with her dramatic, awe inspiring scenery, Coptic churches, multi-faceted tribes still practising their religion and beliefs, and wonderful wildlife including the Simien wolves.

On the ground, you will be mesmerised by amazing guides offering incredible walking in the Simien Mountains with jaw dropping scenery.

For me, the most fascinating and unusual place the private helicopter safari allows you to visit is the Danakil Depression. This fabulous area is an active volcano, the result of the rift between Africa and Asia. This is one of the hottest places on earth and one of the lowest places on our planet!

The salts rising in the molten lava are deposited and when the ground dries, the most colourful deposits are left behind, leaving a landscape almost alien in appearance.

It is one of the most inhospitable places on earth and yet you will see Afar men mining salts and leading their camel trains to market to sell it.

To extend your time, you could start off by flying around the Great Rift Valley from Kenya before flying on to Ethiopia – just fabulous! Perhaps you might like to take in the Chalbi desert in the northern part of Kenya, en route to Lake Turkana and the Suguta Valley.

Otherwise known as the Jade Sea, discovered by Count Teleki in 1888, Lake Turkana is a UNESCO heritage site and the world’s largest alkaline lake. Several nomadic tribes live around here, including the Gabra people and one can see their way of life, herding their camels across the desert. This is true, exceptional and fascinating, untouched Africa!

Next is a flying safari up the barren, hostile but hauntingly beautiful Skeleton Coast in Namibia where a concession area of 16,845 square kilometres is all for you.

Spend anything from three nights to a week flying with some of the finest pilot guides - the Schoemans, (this is a family owned business which makes it that much more special) along the desert coastline in northern Namibia and the Skeleton Coast – to which you have exclusivity.

First called the Skeleton Coast by John Henry Marsh in his book published in 1944, this is now the commonly known name for this stretch of coastline that has seen many ships wrecked in the thick fogs that frequently sit over the ocean and coast.

As you fly over the dunes you can view the wrecks from above, some of which are in remarkably good condition.

On the longer week-long safari, you start off in the Namib Desert. The Namib Desert is one of the oldest deserts in the world, at least 55 million years, and covers much of Namibia.  The name Namib is of Nama origin and means “vast place”.

It receives almost no rain and yet life does abound in its harsh environment, the Welwitschia Mirabilis and the desert elephant are the two most outstanding creatures which have adapted to living in a beautiful but stark environment.

But don’t leave a Skeleton Coast flying safari too late as being a family owned operation, they are not planning on doing this forever! It is the best experience to have in Namibia, especially if you are interested in deserts, geology and culture!

While you’re there, flying of a different sort, but equally stunning in Namibia, is to take a hot air balloon across the Namib Desert, where the colours of the dunes change hue as you silently drift over them.

These breathtaking flying safaris are my favourite selection of incredible, life changing experiences in Africa, totally private and with the added benefit of moving swiftly between destinations, and viewing some of the most fantastic parts of the world from above to give you a new appreciation of their beauty!

I would be delighted to share some more of my experiences with you, why not call me to discuss them?