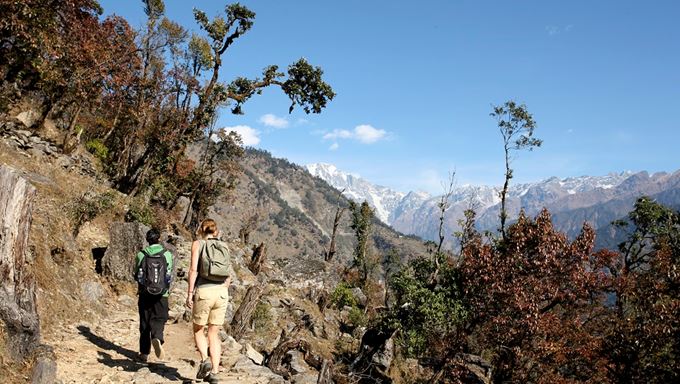 Growing up, I have always been drawn to mountains. I find them remarkably peaceful and humbling. During summer holidays, my cousins and I used to regularly hike on Mount Girnar, located very close to my grandparents’ house in Junagadh.

An impressive 3666 feet high volcanic mountain, Mount Girnar is older than the Himalaya. The forests surrounding the mountain are part of Gir National Park, home to Asiatic lions, leopards and sloth bears, and the Jain temple complex upon it is one of the most ancient temple complexes in India. The thrill of the climb and the breath-taking views from the summit will remain with me forever. In Sir Edmund Hillary’s words “It’s not the mountain we conquer, but ourselves.” 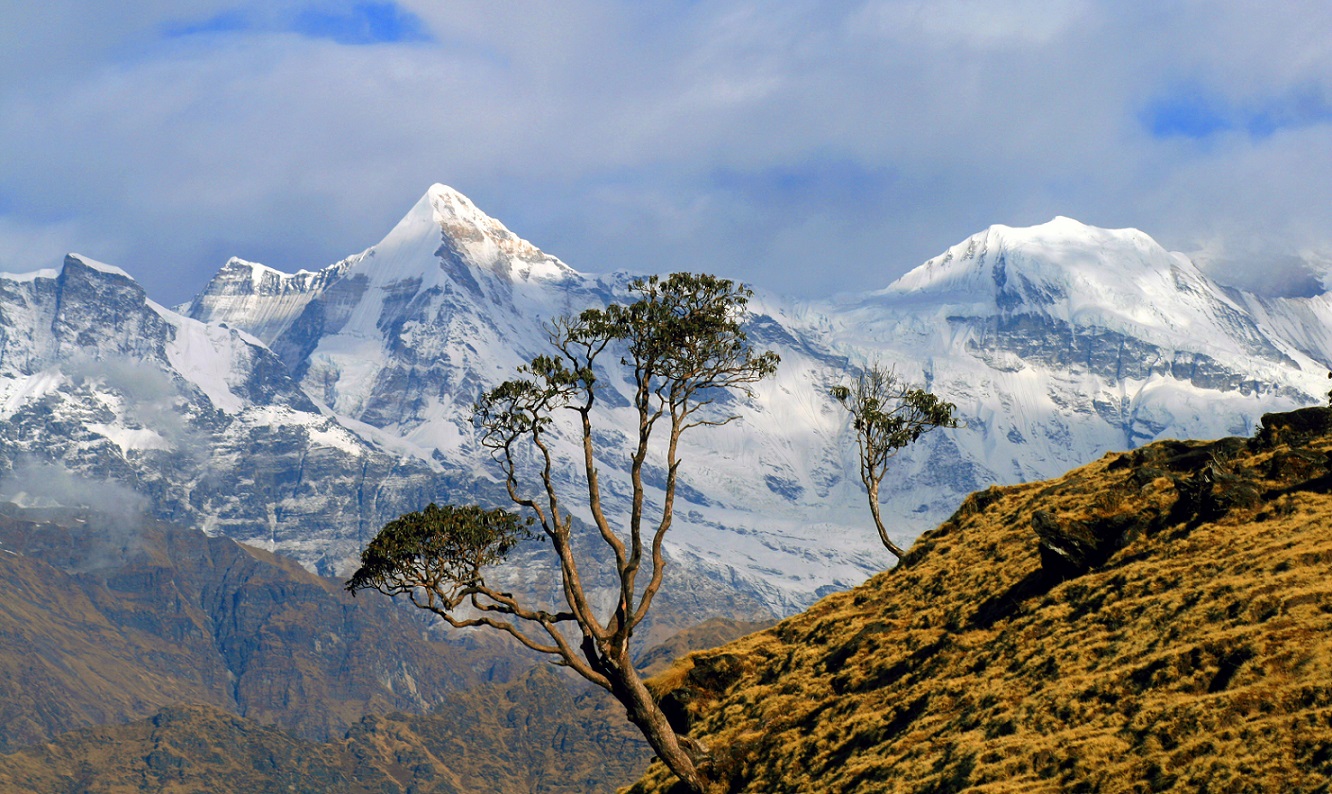 Where Are the best walking holiday experience's in India?

For those who love the mountains, exploring the Himalaya often tops the wish-list, owing to its compellingly beautiful and dramatic scenery along with refreshingly pure cultural interactions in remote villages. The mountainous regions of Nepal, Bhutan and India are more accessible than ever and it is an experience that I would implore everyone to undertake at least once!

In my opinion, the walking in the Indian Himalaya offers the most gentle and untouched experience and there are three areas that are particularly good: Kumaon in the northern state of Uttarakhand, Sikkim in the heart of India’s Eastern Himalayan range and the high-altitude desert of Ladakh in the far north. 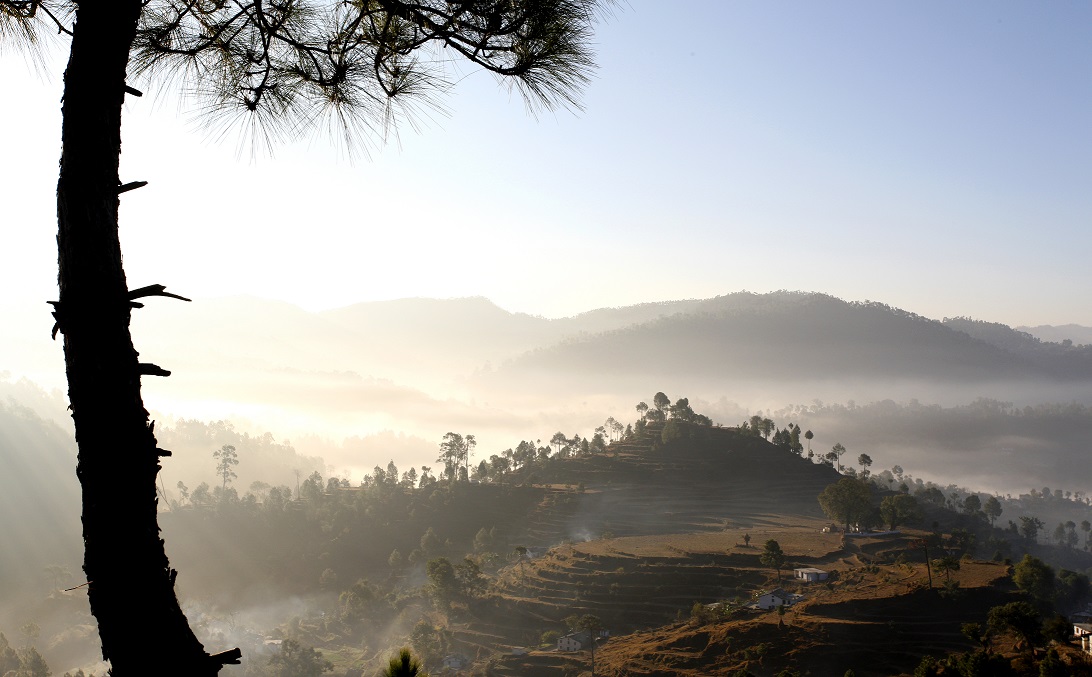 Shakti Himalaya’s Village Walks make it possible to explore and experience these gorgeous and completely off-the-beaten-track regions with an honest and sustainable approach that is based on the ethos of providing an authentic Himalayan experience without compromising on comfort and luxury.

The walks traverse the foothills with overnight ‘homestays’ in various villages. The locals are super friendly and are keen to share their way of life with you so you can encounter life in the region as it is. 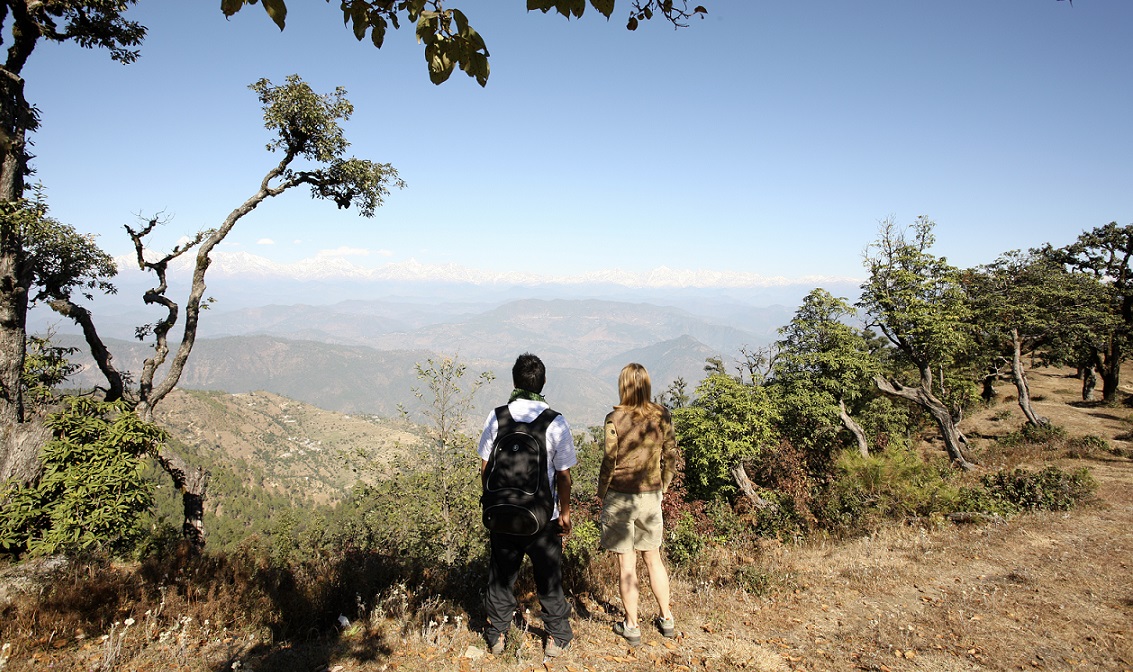 Ladakh has the highest number of village houses covering a much larger area, so the journeys between villages are done by vehicle but there are plenty of walks and other activities such as cycling and rafting that can be undertaken around the villages.

The Kumaon region is dominated by the views of the awe-inspiring summit of Nanda Devi, previously considered the highest peak prior to Everest being discovered in 1865 and the second highest mountain in India. The walks can be combined with the beautiful ‘360 Degrees Leti’, which offers panoramic views over the town of Leti and towards the mountains. 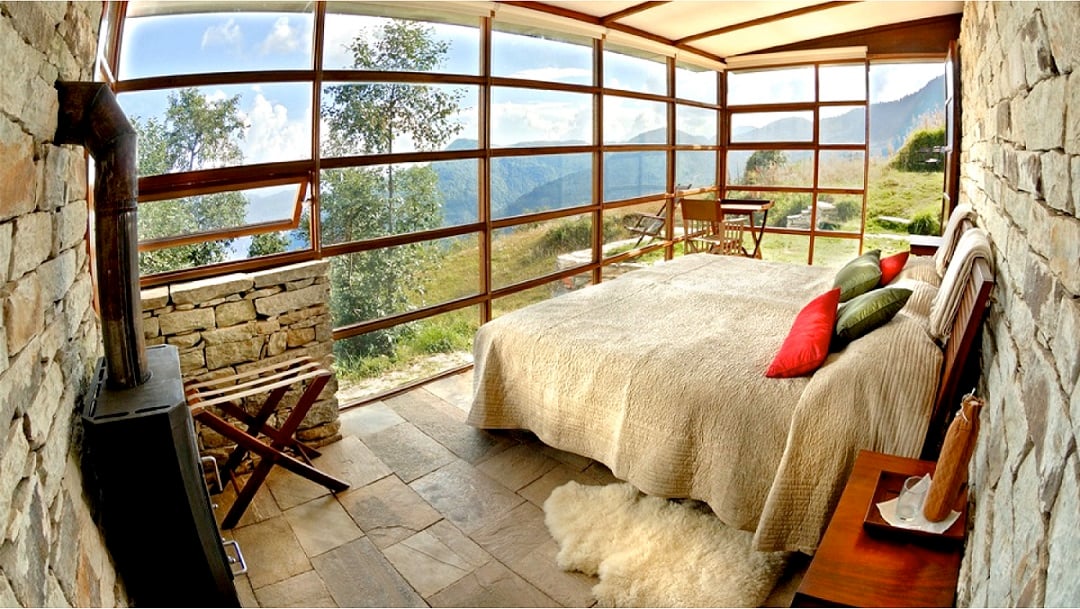 Just four cottages, with glass windows across one side of the room, allow these magnificent views to seep in from sunrise to nightfall. There is a separate lounge-cum-dining area made of local wood stone with a small wooden window which one slides across the stonework to reveal yet more of the stunning views. With twelve guests at most around the dinner table, one has plenty of time to chat amiably to one’s guide and host, but it is also possible to reserve the entire lodge for exclusive use.

For the village walks, one has the choice of staying at three or four different villages and the idea is that one walks to each – generally speaking anything from 4-6 hours each day, stopping for a picnic lunch en route. 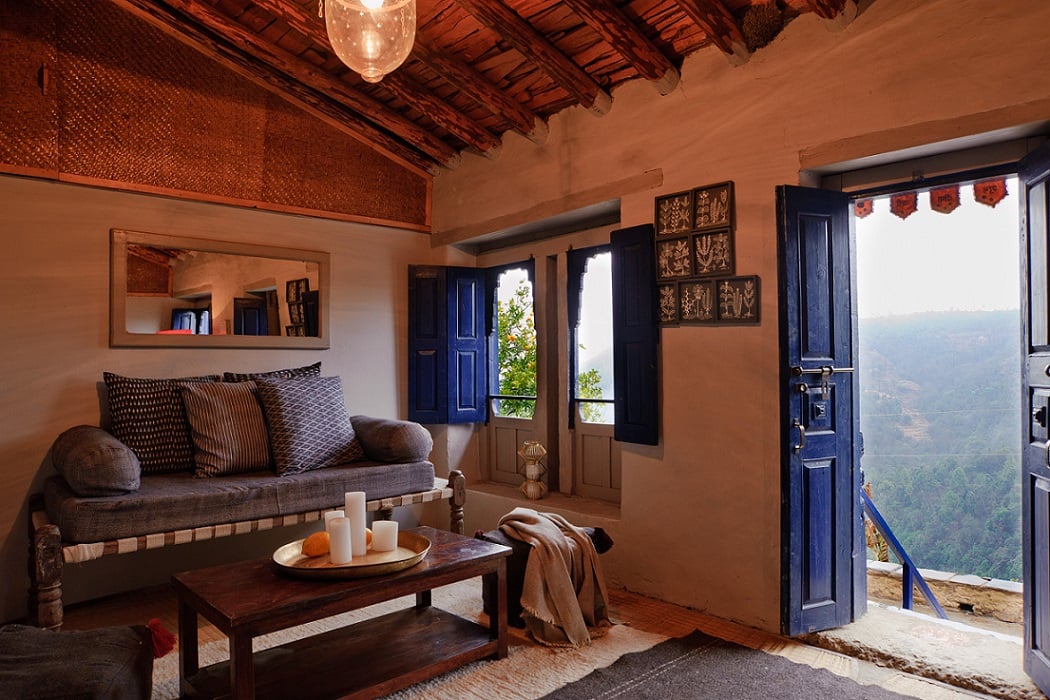 Alternately, one can elect to stay at just one village house. You carry a small day-rucksack with essentials. This is no route march, but rather undulating walking with plenty of inclines and declines through extremely pretty terrain where one observes the agricultural community at work, ploughing their fields with oxen and forever making space by planting every inch of the land possible.

The houses with their gorgeous slate rooves and interesting symbolic paintings on the walls are enchanting and aesthetically very pleasing. The rooms are extremely comfortable; simple and colourfully furnished. Hot water bottles are placed in the beds in the evenings and there is a separate "bathing" area which houses western toilets, a room where hot water is brought for you to bathe, and an outdoor basin and mirror. 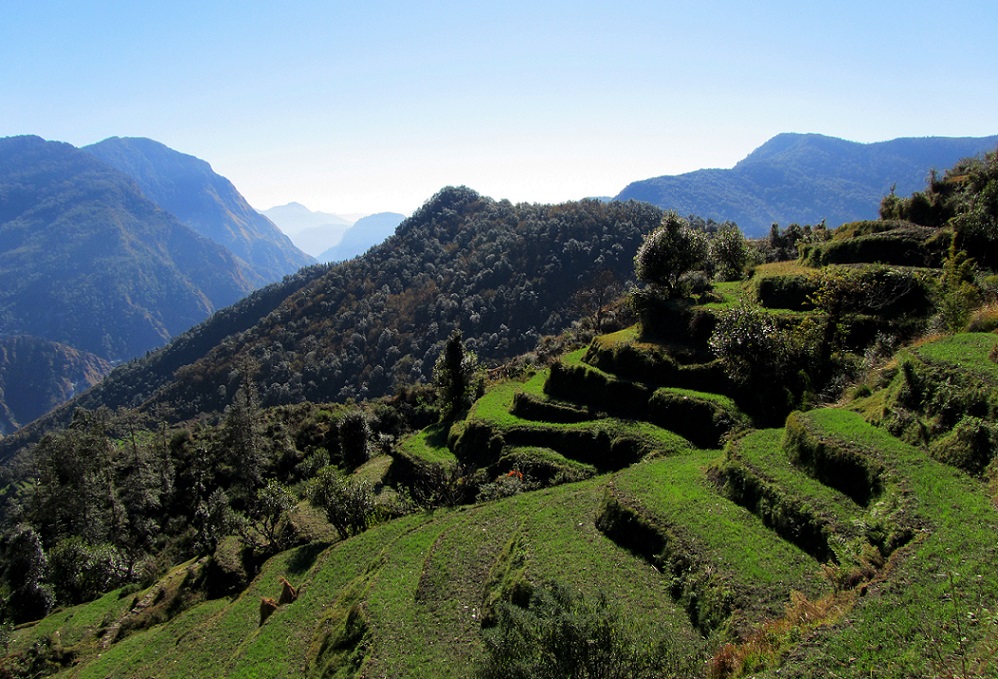 One is completely surrounded by the ridges of the Kumaon mountain range and a profusion of pine forests with several different species of pine as well as Sal trees. The landscape is largely terraced and mostly used for paddy fields; the rice is harvested in November and December. Each home has its water buffalo as well as general cattle and goats.

You can mix and participate as much or as little as you like with the host family. Your guide is your translator and assistant and thus you can chat to your hosts through him. Meals are simple yet tasty, comprising rice, curried vegetables or meat, and a dessert. Wonderful cups of locally produced lemongrass tea and freshly made almond biscuits are a treat! 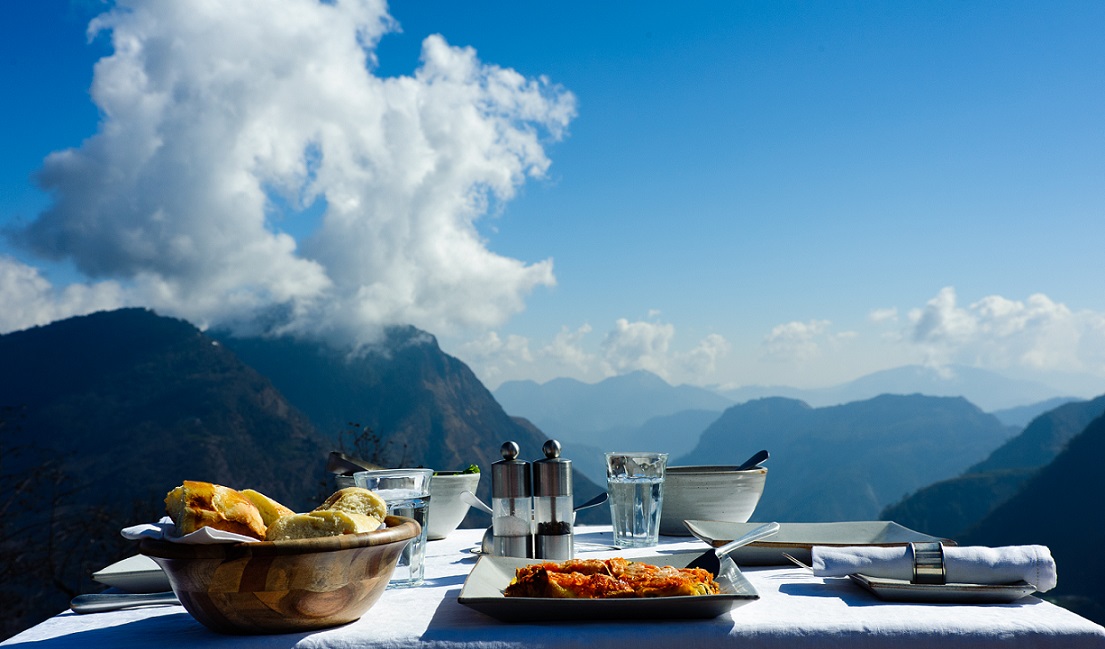 When to visit Kumaon

The beauty of Kumaon is that one can visit it almost year round. The post monsoon months of October and November offer lush scenery and clear views with daytime temperatures around 25°C, dropping fast in the mornings and evenings. For those perfect white-capped mountains and clear blue skies, January and February is best - but quite cold! Between March and May the rhododendrons come into bloom.

Walking through the Garden State of Sikkim

Located in the north-eastern part of India, the former Buddhist Kingdom of Sikkim shares its borders with Bhutan, Tibet and Nepal. 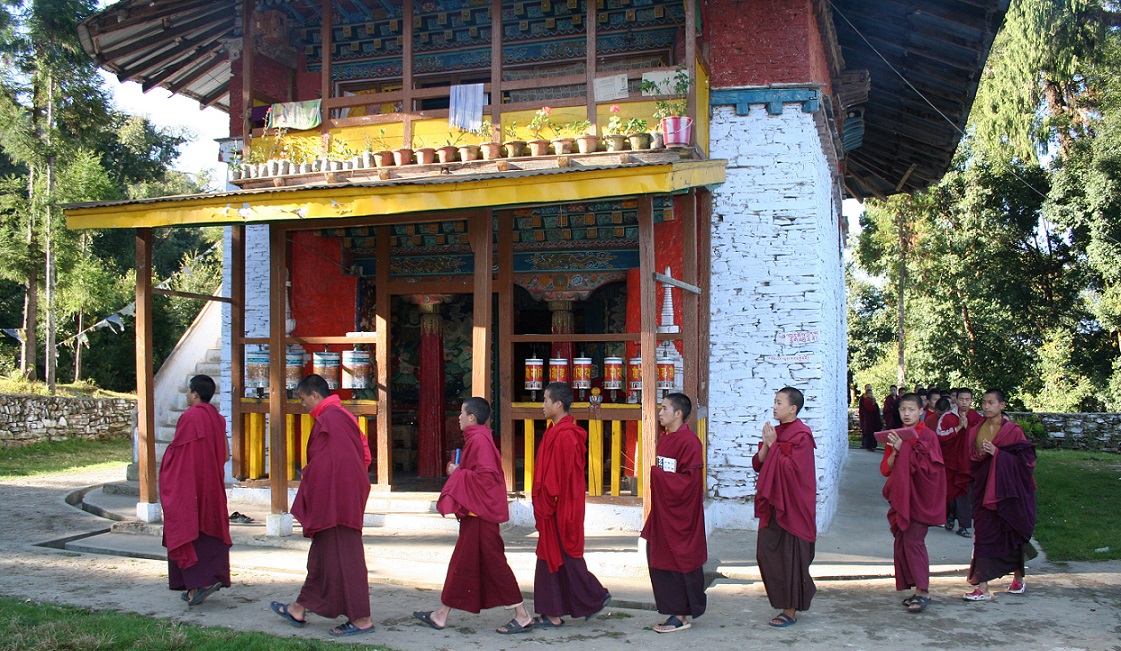 Despite being so remote, it is one of the most progressive states in the country and the first to ban disposable plastic bags and single-use plastic bottles. In 2016, it went on to ban the use of disposable plates and cutlery made of Styrofoam and thermocol. Like Kumaon, this region boasts untouched, incredibly stunning and uniquely diverse landscape and culture, in the shadow of the world’s third highest mountain – Kanchenjunga.

Known as the “garden state”, Sikkim is home to more than 4,000 species of plants, including rhododendrons and over 450 species of orchids. It is also considered to be a birder’s paradise and is home to an astounding variety of birds including snow partridge, Himalayan cuckoo, bearded vulture ‘lammergeier’ and Tibetan crow. 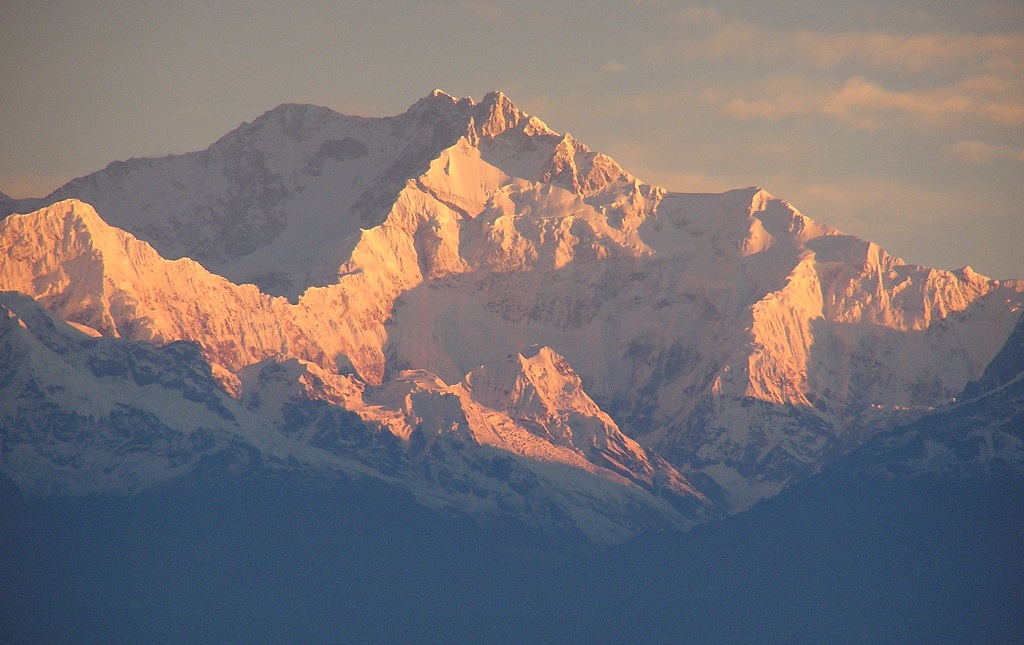 The walks are designed to connect three village houses and again one can cover all three of them on a longer trek or just stay in one or two houses and plan daily excursions nearby.

When to visit Sikkim

This area is best visited just after the monsoon, between early October and early December when the vegetation is lush and the views are clear. Early February to late April is another good period when days are warmer with daytime temperature around 20°C. 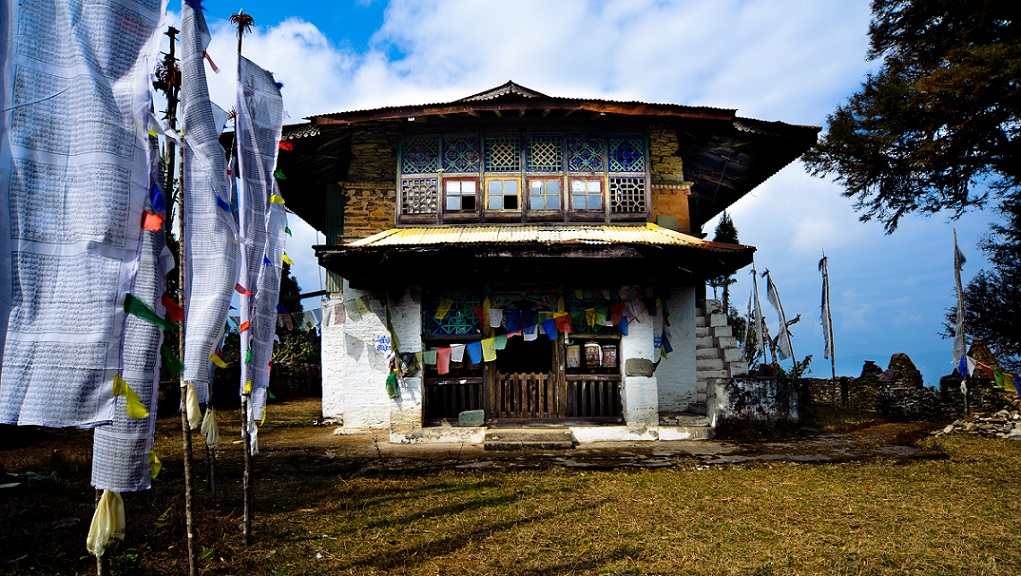 Walking and trekking in Ladakh

If you are looking for something a bit more adventurous and rugged, Ladakh offers the most dramatic scenery and experiences of the three regions. A high-altitude desert located over 3,500 metres above the sea level, Ladakh is dominated by the Ladakh, Karakoram and Zanskar mountain ranges boasting the largest concentration of high peaks on the planet including the world’s second highest mountain, K2. The terrain is simply surreal with rugged mountains and arid plains contrasted by gushing rivers, turquoise lakes and lush fields in between. 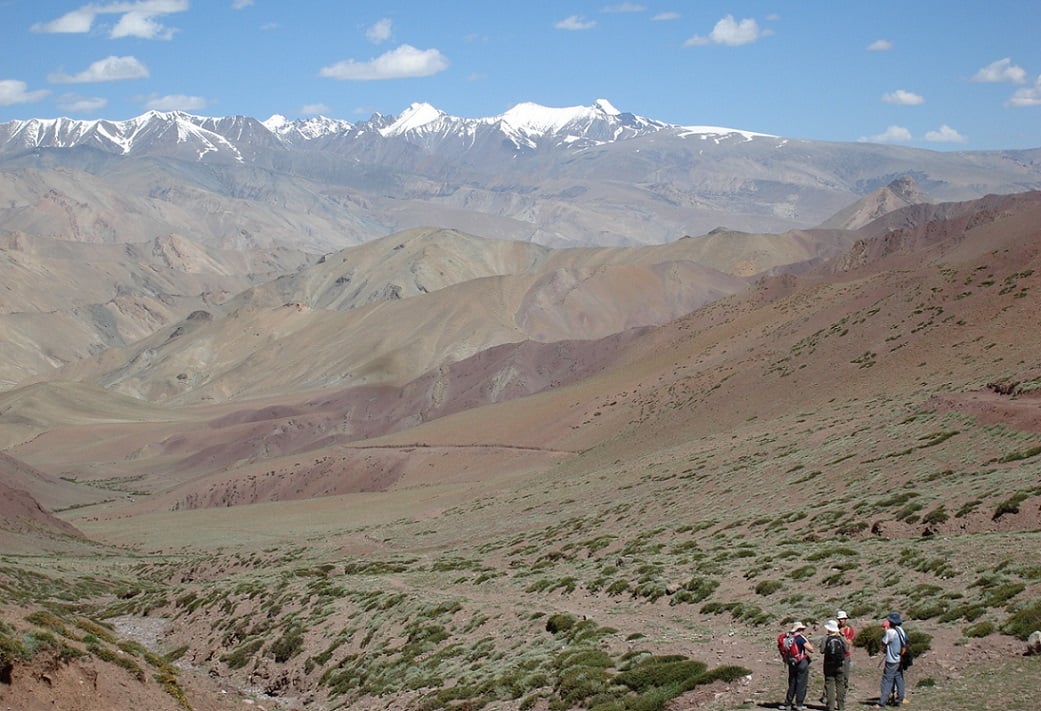 Known as ‘little Tibet’, Ladakh is the best place in India to experience authentic Buddhist culture and traditions. If you are interested in wildlife, this is the best region in the world to spot the endangered and highly elusive snow leopard along with other unique wildlife including red fox, ibex and urial.

There are seven villages houses in Ladakh offering the most authentic Ladakhi experience along with fascinating outdoor adventures including archery, rafting, hiking and mountain biking. For a deeper understanding of Buddhism, one can visit several monasteries and attend lectures on Buddhist philosophy. 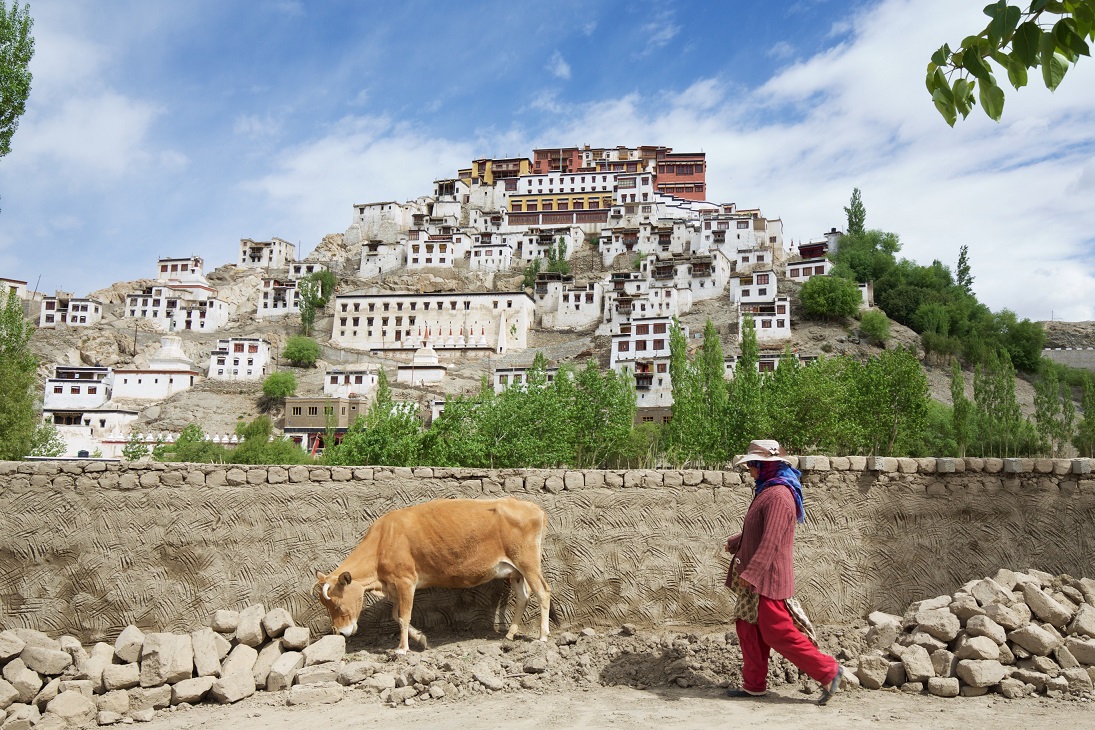 For those who don’t mind “roughing it out” and wish to push themselves, mobile camping can be arranged using dome tents in utterly remote and wild locations. The scenery is simply otherworldly and at night you will be sleeping under some of the clearest skies to be found anywhere in the world! 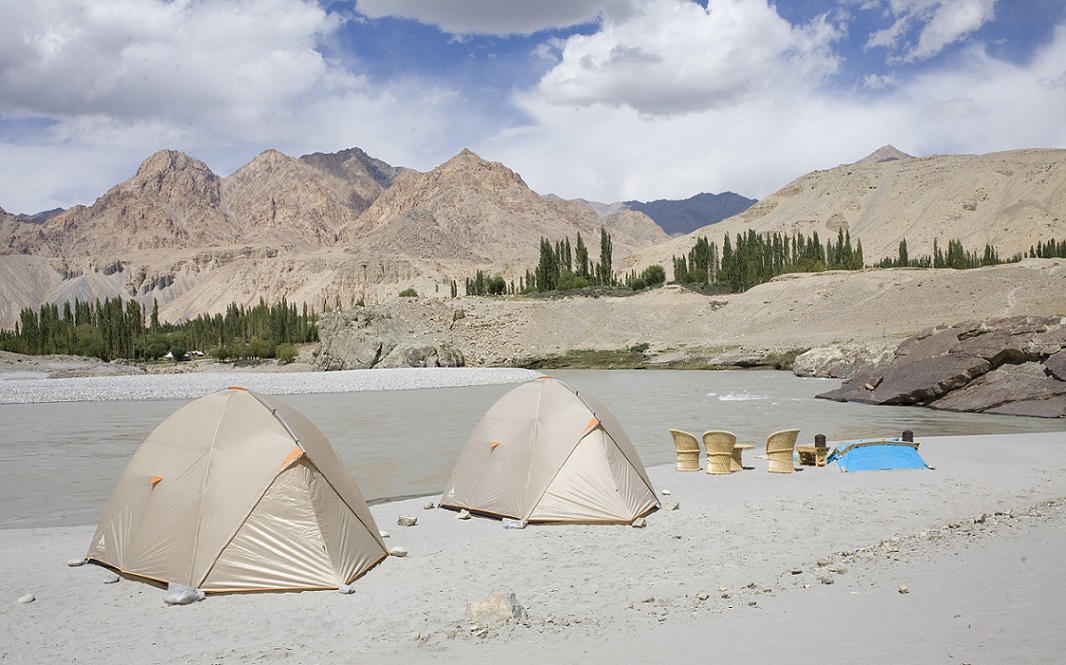 When to visit Ladakh

Ladakh experiences very little rainfall and sunshine is almost guaranteed. May to early October is the best time to visit this region for walking holidays with comfortable temperatures. Daytime temperatures can reach as high as 30°C in July and August.

On all Shakti journeys, you will have private transportation, support staff including porters and chef, and private guide to help you appreciate the local culture. At the end of each day, you will get to enjoy relaxing sundowners with mesmerising views and savour wholesome and fresh organic food. 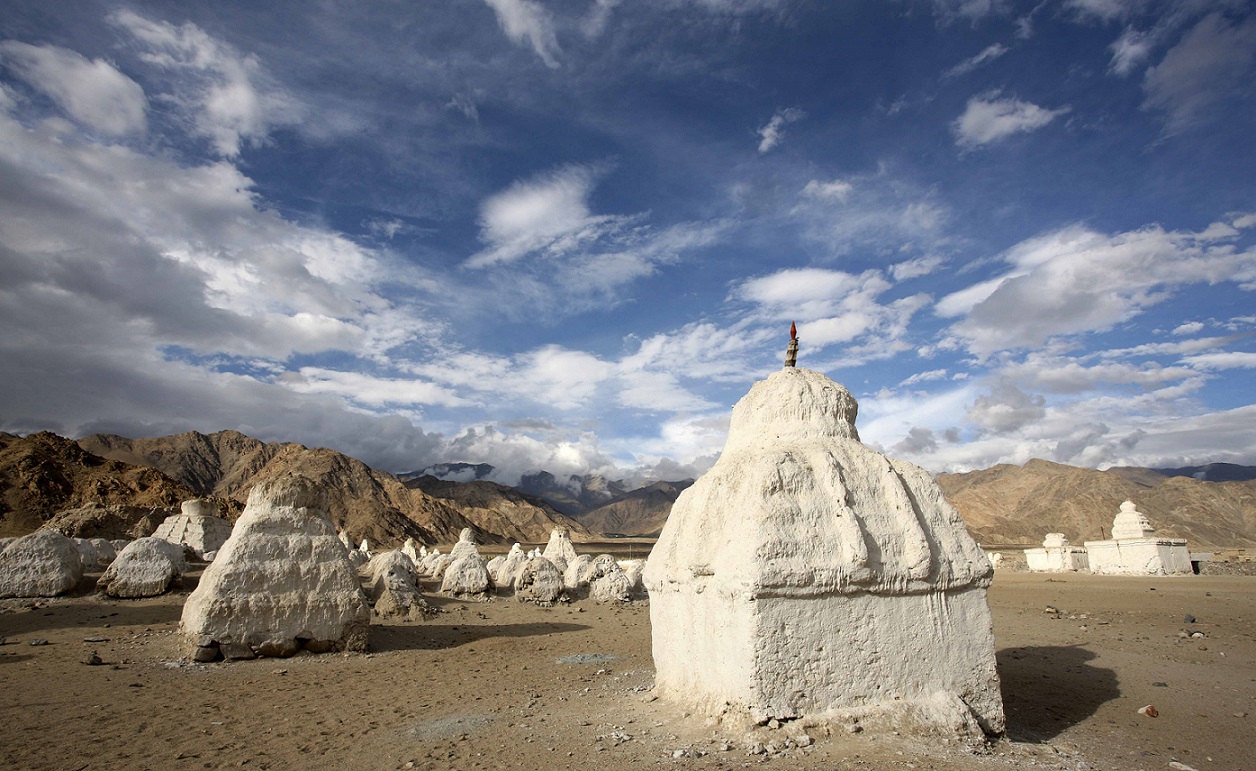 So, if you want to see an India which is away from the crowds yet be amongst her people and, if you also love the open countryside, magnificent views and rural way of life with daily exercise, then this is absolutely for you! Please do feel free to contact me for more information. 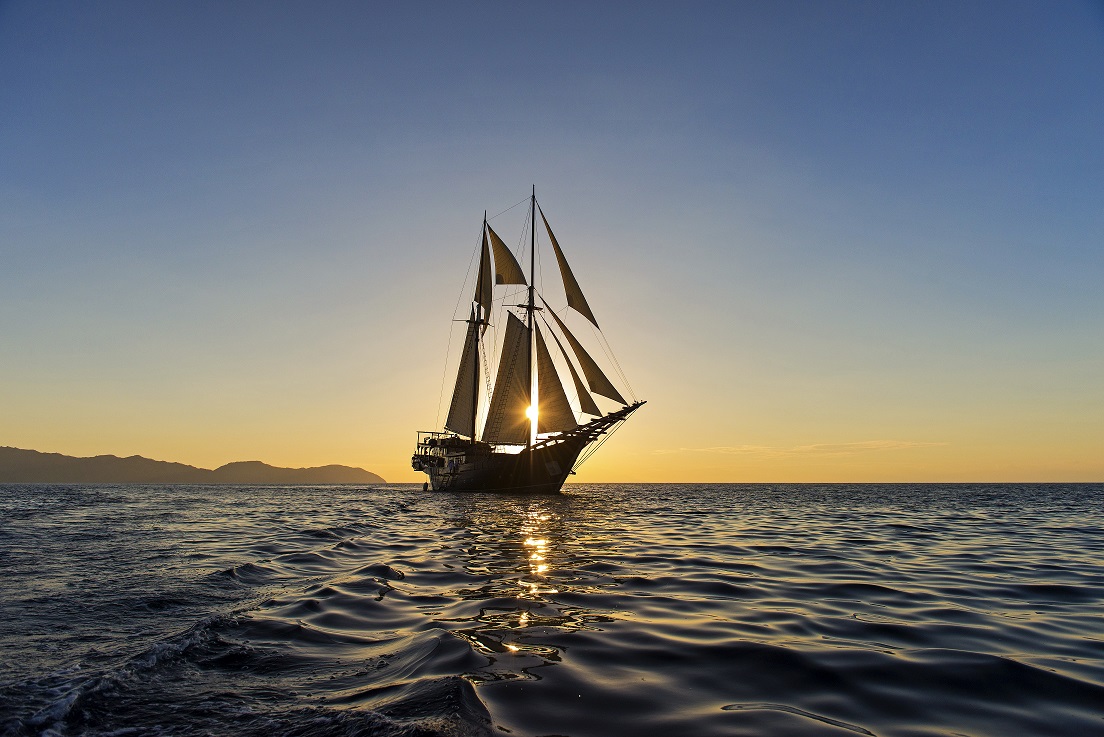 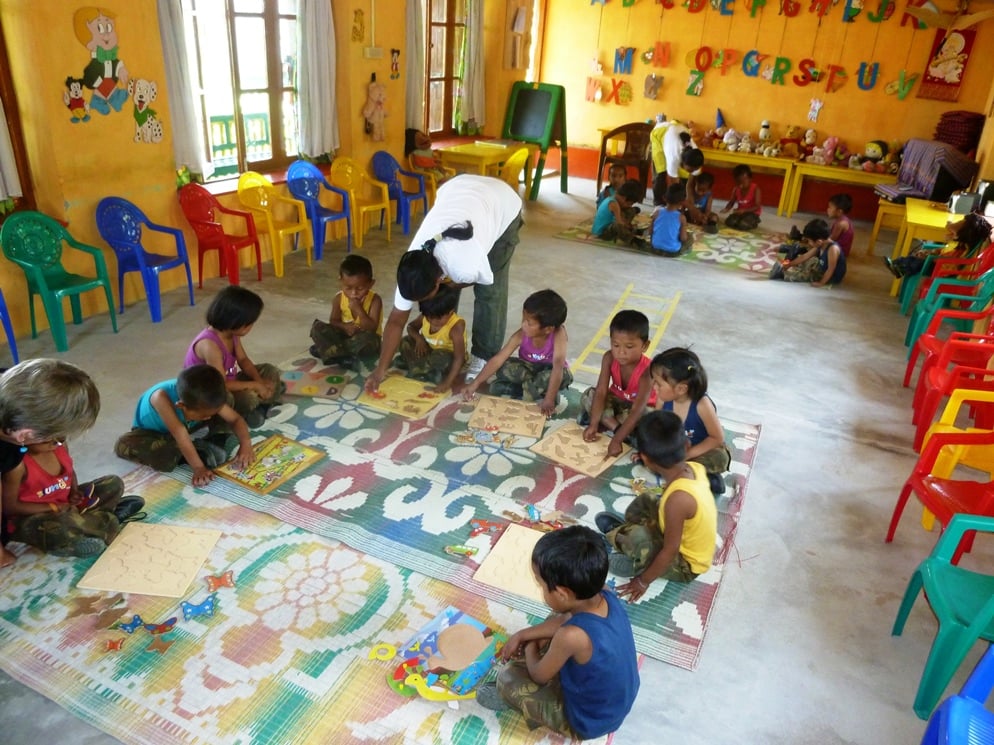 How is 'Sustainable Travel' helping children in India's Samthar Valley?

In the Samthar Valley of West Bengal, sustainable travel is directly benefitting local communities through investments in infrastructure, environmental projects and educating local children at the inspired Awake and Shine School. 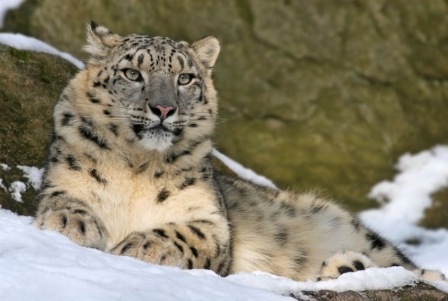