Floating Homes – The Houseboats of Kashmir 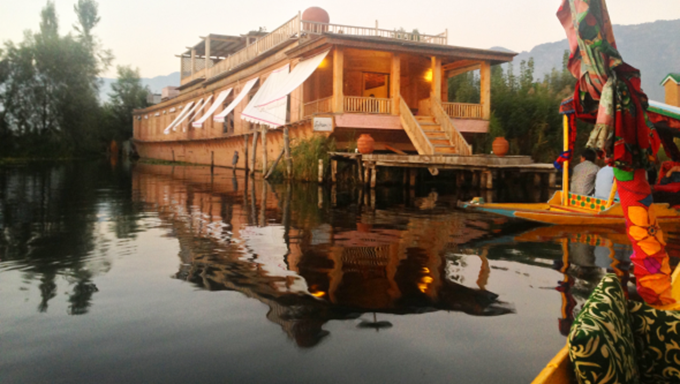 Farooq Wangnoo has more white in his beard than the last time I saw him – mainly because that was 26 years ago and Farooq didn’t own a beard. He’s leaner but there is the same glimmering smile, the soft-spoken humour and the fanatic gleam when talk turns to fishing – as it inevitably must with a houseboat owner of his pedigree.

Farooq is the owner of the Marco Polo group of houseboats – 3 boats of varying size that occupy a blissfully quiet and picturesque corner of Nagin Lake.

Unlike Dal, Nagin is quiet, free of the bustle of shikaras and floating shops and constant activity. Here you don’t look out towards the boulevard but across the lake to a palpably longer line of houseboats on the opposite shore, kept in line by the hunch shouldered bulk of the Mughal fort on the Hari Parbat Hill.

The closest houseboat to Marco Polo is well beyond earshot and masked by a line of drooping willows. It is a serene, tranquil spot. As with most other houseboats that struggled through the interminable years of the troubles, the Marco Polo boats are in need of major renovation and modernisation.

In keeping with the houseboat fashions of an earlier era, the décor is all florid chintz and bright plastic flowers. But change is afoot. In fact one of the reasons I am not spending the night here is that Farooq is in the midst of major repairs, restoration and upgrade.

With a twinkle in his eye he tells me about his fancy new bathrooms where the high-tech shower unit has a built in music player!! I’m besides myself with laughter. But Farooq, surrounded by photographs of British generals and nobility, is determined that Marco Polo will once again be the Houseboats of choice for the cream of the tourist market. There is no doubt that he will succeed but he has his work cut out, for across town is a boat that has set the bench-mark for the future.

On Dal Lake a 50-year old houseboat has been transformed. This is ‘Sukoon’ (meaning Bliss) and indeed it is. To reach it requires a short boat ride in the company motor-boat or a 15 minute paddle in a shikara. I prefer the shikara. The houseboat itself is a haven of elegant calm and superbly combines the traditional hand-crafted houseboat with a sophisticated, modern Indo-European aesthetic. The colour scheme of pink and turquoise mirrors the colours on the sister houseboat ‘Lotus’ far to the south in Kerala where the owners of Sukoon – the Chapri family – own the hugely successful and very lovely Neeleshwar Hermitage Beach Resort and Spa. 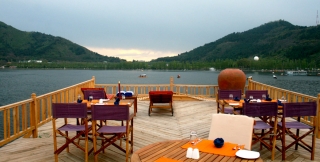 There are 5 bedrooms in Sukoon and they can only be described as sumptuous with superb furniture, deep mattresses, luxurious linen, electric blankets but NO TV. This is definitely harking back to the old houseboats and the idea that you come to blissful Kashmir for the simpler pleasures of the pre-modern age. I love it! That night I dine on a princely mix of Wazwan dishes: rishta, kebab, yakhni and fragrant Kashmiri rice. 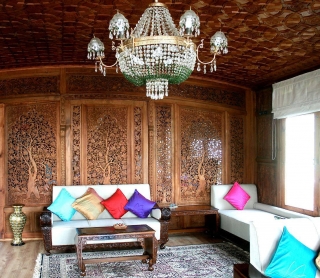 The next morning, lingering over a delicious cup of Kahwa and luxuriating in the bright morning sunshine from the beautifully furnished rooftop terrace, I watch the already busy scene of the shikaras peddling fresh flowers or tourist tat from houseboat to houseboat.

Black kites wheel above me and occasionally swoop down to water level to investigate some interesting titbit. The slightly nervous young waiter asks me about breakfast but last nights dinner still sits well above the Plimsoll line. I settle for freshly baked Kashmiri bread and delicious local honey.

As Kashmir opens up once again discerning travellers will have two brilliant choices of houseboat – Sukoon with its elegant, modern comfort on busy but picturesque Dal Lake and Marco Polo on serene and tranquil Nagin Lake with its more traditional luxuries and the inimitable personal style of Farooq Wangnoo.

For more information about our unique, tailor-made holidays to the Houseboats of Kashmir, please contact us.