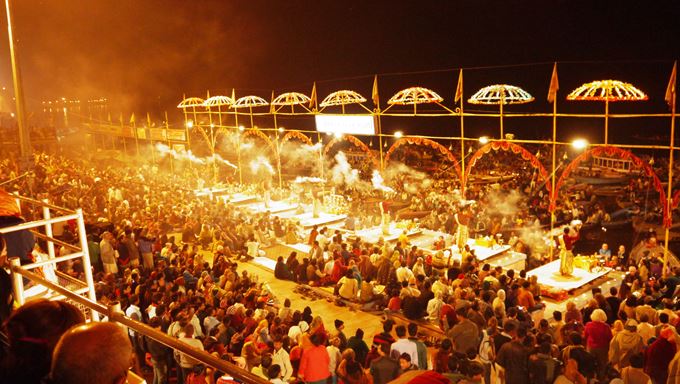 This is a perfect holiday to The Ganges River, which is the spiritual heart of India and where it is better known as Mother Ganga. For visitors, to immerse one’s self in this sacred river has the effect of washing away any previous negative karma.

Many Hindus choose to make their final journey to The Ganges so that their bodies at the time of death may be cremated on the River’s banks in order to attain ‘Moksha’ or peace.

It can be very strange and perplexing that you have living pilgrims ritually bathing in the river just a short distance from the cremation Ghats, A visit to the Ganges River and in particular one of the many centres on the river such as Varanasi, for many is the highlight of a tour to India.

Varanasi features very much on one’s wish list of places to see or as a matter of fact experienced while on a journey through India. I was one of them. Some may find it extremely shocking, however although I was born and brought up in India, I kept on postponing my visit as I felt it would be really intense and overwhelming at the same time being the epicenter of Hindu religion.

No one from our family had been to Varanasi and though we aren’t a religious family, there was huge amount of curiosity that made us finally arrange one of the most important journeys of our life. My mum was equally keen to experience Varanasi and therefore without wasting anytime we were on a flight to this eternal city.

On arrival we were greeted by our friendly guide Shekhar who escorted us to our stunning palace hotel through all of the hectic traffic, mobs of people and cows jamming into narrow streets. We stayed for couple of nights at the 19th century Nadesar Palace built by the East India Company and later the home of the maharaja which is now a 10 room hotel managed by Taj Hotels.

The suites are spacious, filled with period antiques and the maharaja’s art collection and face grounds of manicured gardens, mango orchards and fields of marigolds and jasmine that you can tour by horse drawn carriage. It’s all very Raj with black and white marble floors, a curving central staircase, iron four poster beds, Persian rugs, mirrors framed in Venetian glass.

The following morning was very much a nothing day and we spent hours watching the holy Ganges and the people who have so much faith in her. It was a sight not be missed, something that I found extremely difficult to explain. That afternoon we were going to walk through the old city and arrive just in time to experience the religious ceremony that takes place every day in the evening.

From Manikarnika, the most sacred cremation spot in Varanasi, which is at the core of the spiritual process that thrives in the city, we walked through narrow lanes, into the very heart of the city, towards Varanasi’s most famous pilgrimage site - the Kashi Vishwanath Temple (Golden Temple). The lanes on the way were dotted with small shrines, residences, tea-shops and lodgings for pilgrims.

My mum was keen to make a stop at the Satua Baba Ashram, where the scriptures are taught in Sanskrit to young men. Born in Dar e Salam, educated in England, she only came to India because my conservative grand parents wanted her to get married to a Hindu.

However she was the only member of our family who was religious and therefore she wanted to spend some time at the Ashram chatting to the sadhus trying to get a better understanding of the Hindu religion which as Mark Twain described, "Older than history, older than tradition, older even than legend and looks twice as old as all of them put together".

After a 45-minute walk, we arrived at the Golden Temple. They say, that you should visit Kashi Temple at least once in your lifetime so this was one big moment. From here we visited the Kalabhairava Temple – the powerful guardian deity of Varanasi and Mahamrityunjaya Temple – where it is believed that one can win over death.

Later we joined a larger lane, towards the colourful flower market where we were met by our cheerful driver Vishal. After an ultimate cultural experience, we returned to the comforts of our stunning palace hotel.

Shekhar met us at 6 pm and guided us to the Ghats as just before sunset, the river is the place to gather again. Either at a seat on the Dashashwamedh Ghat, or preferably in another small boat just in front of the Ghat to observe the Ganga aarti, which is a synchronized, choreographed ritual, performed by chanting priests in saffron robes to honor the river, Lord Shiva, the sun, fire and the universe itself.

It’s quite a dramatic production with clanging cymbals, movements with flaming lamps and again, a sense of powerful spirituality, even if you know nothing about the rituals or the Hindu religion. This was the moment by mum was waiting for as she had seen videos and documentaries of this spectacular ceremony on several occasions and had always been keen to experience it in person.

Sitting there with thousands of people and watching the priests chanting was certainly, a once in a lifetime experience for me and certainly for my mum. It was just surreal! It therefore wasn’t at all surprising that both of us were speechless on the drive back to our hotel. Dinner was by the pool in which votive candles were floating. A very calming finish to an extremely stimulating day!

As this was a short trip and was our last day before we taking a short flight to Khajuraho, our expert guide had arranged for us to experience and travel by a small rowboat on the River Ganges. As the sun came up, we could see countless candlelit paper boats with flowers carrying people’s prayers float their way across Mother Ganga’s holy water.

Countless pilgrims take a holy dip in the waters, others meditate in solitude and the rest bow their heads in prayer along the Ghats. I realised how both my fears of the city being intense and overwhelming, were so true.

The park gained notoriety in 2009 when it became apparent that it had lost all its tigers - many due to poaching - but relocation of tigers from other parks has met with a good degree of successful integration.

Sightings of tiger remain rare but Panna shouldn't be overlooked as it offers the chance to explore the quiet forests, grasslands, gorges and River Ken in central India's Vindya Hills and their wide diversity of wildlife.

Panna has five other species of cat as well as hyena, wild dog, jackal and wolf, and deer. It is an excellent birding destination with more than 200 species recorded including a high density of Paradise Fly-catcher. Between mid October and June morning and afternoon safaris can be made by jeep.