Where are the best walking holidays in the Himalayas? 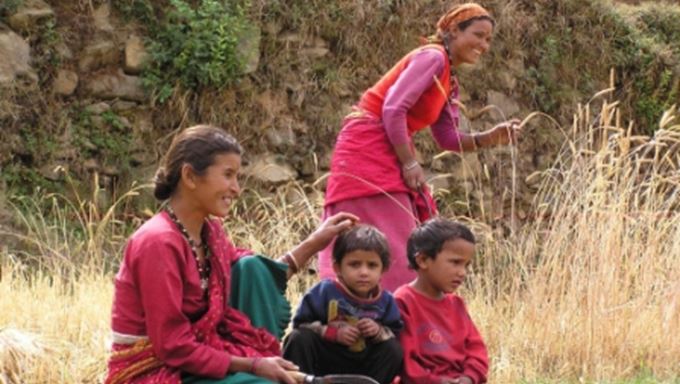 This is an experience that I would implore everyone to undertake! I would, however, recommend that prior to taking this walk, that some form of cardio fitness is undertaken just to make the beginning easier. The other alternative, is that like me, you get fit along the way!

However, once underway, what seemed like quite a challenging first day then turned to abject bliss! For, here around me, was the most spectacular scenery capped by the awe inspiring summit of Nanda Devi, said to be the highest peak prior to Everest being discovered in 1865 and the second highest mountain in India. Each morning, depending, depending upon where I was, bestowed heavenly views of snow capped Devi, Nanda, Kot and several glaciers. It was a divinely spiritual sight to awaken to each day. I then stayed at the beautiful”360 Degrees Leti’. Named as such as it offers 360 degree panoramic views over the town of Leti and towards the mountains. Just four cottages, with glass windows across one side of the room, allow these magnificent views to seep in from sunrise to nightfall. There is a separate lounge-cum-dining area made of local wood stone with a small wooden window which one slides across the stonework to reveal yet more of the stunning views. During the day one might walk side by side with one of the local villagers, a heavy load balanced across his or her head as they nimbly and deftly negotiate the stone walkways, oblivious of their load.

One can either undertake serious walks or treks or take a gentler form of exercise, for instance walking a couple of hours to get to Brahmin shrine where the priest anointed and blessed us after receiving some gifts of fruit. Rhododendron trees abounded in full bloom, a lovely sight to behold. With twelve guests at most around the dinner table, one has plenty of time to chat amiably to one’s guide and host. Leaving 360 Leti, we walked down several hours to the road head and drove to a village for the start of what are known as village treks. Here one has the choice of staying at three or four different villages and the idea is that one walks to each – generally speaking anything from 4-6 hours each day, stopping for a picnic lunch en route. Alternately, one can elect to stay at just one village house. One carries a small day-rucksack with essentials. This is no route march, but rather undulating walking with plenty of inclines and declines through extremely pretty terrain where one observes the agricultural community at work, ploughing their fields with oxen and forever making space by planting every inch of the land possible. The adobe houses are enchanting and aesthetically very pleasing with gorgeous slate roofs. The architecture is very appealing, with interesting symbolic paintings on the walls. The rooms are extremely comfortable; simple and colourfully furnished. Hot water bottles are placed in the beds in the evenings. There is a separate "bathing" area which houses western loos, a room where hot water is brought for you to douche, and an outdoor basin and mirror.

At the first house, after my walk, I sat on my balcony writing up the day's events and watched the lady of the house and her daughter planting chillies next to the beans. The grandchildren were playing around the house with their puppy and it was a most relaxing atmosphere of tranquil harmony. One is completely surrounded by about eight ridges of the Kumaon mountain range and a profusion of pine forests with several different species as well as Sal trees. In the distance I could hear a saxophone and drums as a party celebrated a wedding and the light was both beautiful and surreal. The landscape is largely terraced and much used for paddy fields; the rice is harvested in November and December. Each home has its water buffalo as well as general cattle and goats. You can mix and participate as much or as little as you like with the host family. Your guide is your translator and assistant and thus you can chat to your hosts through him. Meals were very tasty, comprising rice, curried vegetables or meat, and a dessert. Wonderful cups of locally produced lemongrass tea and freshly made almond biscuits were a treat! The meals were taken beneath a pergola and the table had red geraniums placed in a vase. Another of the tribal houses can be taken over by a family (when walking there are scouts on hand who can help to transport children who get tired). There is so much space to run around and each house has a multitude of board games available. At the second house I helped to plant and water various saplings. This truly, in my mind, is one of the best walking holidays in India.

One of the great things about this region is that so much can be combined. Corbett is literally only a couple of hours away by road where one can try and view tigers, perhaps on elephant back, and then combine the village walks with either Leti or Sitla Estate. Alternatively, for those wanting five star luxury or a spa / yoga, there is Ananda. En route, one would stay at Kalmatia Sangam which is a gem of a place, owner managed by the agreeable Dieter Reeb and his wife Geeta. They are charming hosts and Dieter is a professional mountaineer. The views, yet again, are staggering and the property has a wonderful atmosphere. Walking is, as always, possible. This is also a good alternative for those who might find the village walks too rustic or the walking too onerous. The beauty of Kumaon is that one can visit it almost year round. For those perfect white-capped mountains and clear blue skies, January and February is best - but quite cold! In October and November daytime temperatures are around 25 degrees C, dropping fast in the mornings and evenings. Every month has something to offer and one could easily spend a whole month here. So, if you want to see an India which is away from the crowds yet be amongst her people and, if you also love the open countryside, magnificent views and rural way of life with daily exercise, then this is absolutely for you! Contact us now to begin planning your walking holiday in the Himalayas!

Where else can I have a spectacular walking holiday in Asia?