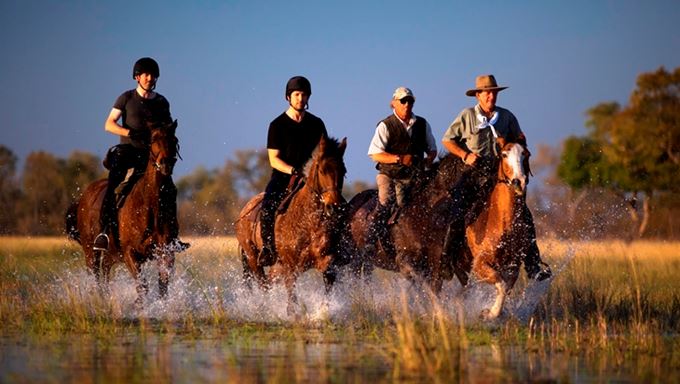 Gallop alongside giraffes, warthogs, and more on a riding safari in Botswana's Okavango Delta. “Be able to gallop out of trouble.”

This riding skill, required by Okavango Horse Safaris to join their horseback tours through Botswana's Okavango Delta, gave me pause. I'd spent thousands of hours in the saddle since childhood, but mostly inside fenced arenas, never encountering any trouble that might warrant a galloping escape. In this context, trouble meant a confrontation with big game.

As a teenager I jumped horses over four-foot fences, an activity that scared me sometimes and now seems unfathomable. I rode on my college team too, but the onset of adulthood essentially ruled out a hugely expensive, time-consuming hobby involving the keeping of a large animal. I missed having a serious commitment to a sport, and more, I missed the mysterious partnership between horse and rider, the nonverbal communication between two mismatched bodies that, at best, creates a spooky mind meld. But life went on.

I'd stumbled upon the concept of horseback safaris while researching a trek in Patagonia that introduced me to the joy of crossing rugged terrain on horseback. A handful of outfitters run trips in wildlife-dense areas of eastern and Southern Africa, but because of the necessary riding experience, the activity is relatively niche. Though the idea made me nervous, I couldn't get it out of my head. I wanted the chance to venture into a world ruled by animals while astride an animal—to be a part of the landscape, away from all the engine noise and clicking camera shutters. I'd seen photos of riders alongside giraffes loping through the shallow floodwaters of the Okavango, and, basically, I needed to do that.

Barney Bestelink, who has owned and run Okavango Horse Safaris with her husband, P.J., since 1986, met me at the airport in Maun, the small town that serves as a jumping-off point for much of the delta, and we climbed into a bubble-fronted helicopter for the 20-minute hop to camp. “We were the first operation in Southern Africa,” Barney said, “and it really came from a combination of P.J.'s love of adventure and my love of horses.” Barney has a stash of wild stories (she rode racehorses for the Emir of Bahrain as a child) and the vibe of a charismatic headmistress—mingled warmth and steel, leavened by a roguish sense of fun.

She had warned me in advance that the region was stricken by drought, and sure enough the world below looked bone-dry: a flat expanse of sand, rust-colored brush, and parched trees.

Over the headset she explained that the drought was concentrating wildlife around water sources, good both for predators and voyeurs like us, not great for most other species. The Bestelinks had paid to have five water holes bored and fitted with solar pumps, and guests had chipped in to fund 12 more in the area, sustaining countless animals. “It's hectic out there,” Barney said. “Everything's around. We're being very careful.” As we landed at OHS's main camp, I could barely see the spacious, sturdy safari tents among the trees. Dozens of hippos crowded the water of the nearest borehole, packed so densely their backs looked like cobblestones. An elephant family hurried in from the bush, eager to drink.

When I swung into the saddle at 6:30 the next morning, I felt a sense of homecoming. The creak of the tack and the warm vitality of the horse were profoundly familiar, even in this new place. There were three other riders: Isabel, a 20-something England-to-South Africa transplant; and a pair of Londoners, Paul and Ashley, who'd become friends on a previous riding safari. As we picked up the trot in a single file, with lead guide Rogers in front and another guide at the back with a rifle, my nerves gave way to exhilaration.

There was no sound but the wind and our hoof beats. The quiet of riding holds environmental as well as aesthetic appeal: No Land Rovers means no emissions, just the occasional contribution of a little grass-based fertilizer.

Within minutes we paused to observe a group of Cape buffalo. The hefty, sullen-looking animals stared back until we moved on. By now I felt secure enough to enjoy the rhythm of riding, the feel of the sun. Barney and her staff assign horses in a careful, intuitive process from a herd of 59 (think Harry Potter's sorting hat), and I'd been given Mabowa, a tall bay dreamboat Barney had bred herself, named, she told me, after a “delicious mushroom” that grows on termite mounds. Mabowa calmly snacked on grass as we made our way across the plains, and Rogers, who's worked for the Bestelinks since 1993, could spot animals long before anyone else. “I'm checking for holes in the ground. I'm checking behind us. I'm checking for where the lions are in the grass,” he said. “My eyes are everywhere.”

We rode for nearly five hours before returning to camp for lunch and a siesta. In just one morning we'd seen Cape buffalo, elephants, zebras, giraffes, a whole pantheon of antelope species, imperious warthogs trundling with upraised tails, and a shy rhinoceros that Rogers had deftly tracked by its footprints. Unlike most rivers, the Okavango, flowing south from the highlands of Angola, doesn't end in the ocean but bleeds out across a vast area of inland swamps and seasonal floodplains before eventually vanishing into the Kalahari Desert. The annual arrival of life-giving water and the resultant greening of the landscape and gathering of animals carries a poetic sense of renewal. This year, however, the aquatic world, usually submerged, was visible beneath our feet: fish nests, snail shells, fields of dried-out papyrus reeds crisscrossed by trampled underwater paths called hippo highways. Some seasons, riders can swim their horses across deep water. I felt disappointed but also a tiny bit relieved that we were keeping our hooves on the ground the whole time.

The second day, I rode Lima, Mabowa's half-sister and a decidedly spicier mushroom. When we found ourselves living my dream of cantering with giraffes, she dipped and bucked in gleeful imitation of their long, rolling bodies. I loved her. Over the rest of the week, we also saw wildebeest, ostriches, crocodiles, baboons, fish eagles, hyenas, wild dogs, jackals, bat-eared foxes, and one badass honey badger. We got charged by an elephant (Rogers had the situation under control) and accidentally flushed three surprised lionesses from the bushes (they bolted away). We did classic safari things too, like drink sundowners and take evening game drives and have a candlelit bush dinner and swim in the camp pool that elephants drank from.

But the horses were the heart of it all. When I think back on the Okavango Delta, I picture it from about eight feet off the ground. When I remember cantering along a hippo highway, a mighty heart beating beneath me, I'm reminded again to be grateful for my childhood on horseback, which taught me to make peace with the kind of risk that can result in the most transformative journeys, to seek the rewards that come from just a little bit of boldness.