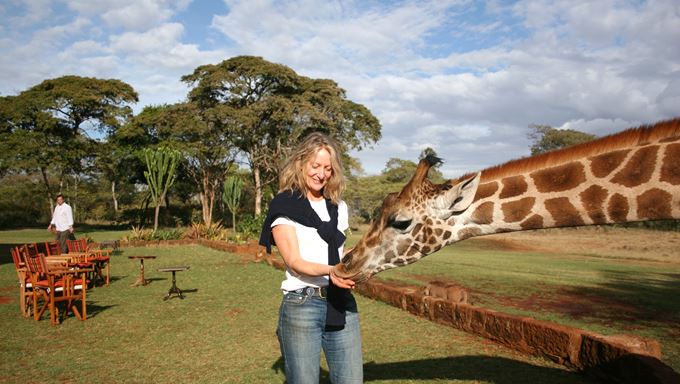 Nicola was born in Calcutta, India, where she spent the first part of her life before moving to Kenya and South Africa with her family. She spent much of her time in the bush on safari with her family and her passion is wildlife! She studied nature conservation and completed her diploma in viniculture and viticulture in South Africa and her PPL before moving to Botswana, where she was involved with conservation and assisted in the running of camps in the Okavango Delta for several years.

She then moved to Namibia, where she ran a camp and was involved in community projects on the Caprivi Strip, assisting the local communities as well as being part of an AIDS awareness campaign. She moved to London and started an office for a Botswana safari company before starting her own company, African Explorations in the Cotswolds.

She spends three months of every year travelling, partly researching new properties and determining philanthropic projects that she and her clients can support as she is deeply involved in assisting a number of charities throughout Africa and India which she is passionate about. She is also very interested in birdlife, plant life and most conservation issues!

Acknowledging her expertise, she was made a Judge for the Good Safari Guide, which recognises the finest safari lodges and camps in Africa.

Fly-camping in Katavi National Park. Canoeing along the Zambezi in the Mana Pools with professional guide James Varden; chimp-trekking safari and snorkelling in the Mahale Mountains; walking in the Selous; game-viewing in the Busanga Plains in Zambia; fishing in the Lower Zambezi, staying on my own island with completely open-fronted cottages, so that one can see the sunrise at Sindabezi.

The sunset at Xugana Lodge in the Okavango Delta. Horse-riding on the Nyika plateau, Malawi or anywhere else in Africa!. Uganda and Rwanda for their chimpanzees and gorillas. Hot air ballooning at sunrise over the dunes of the Namib desert. Going out with the world authority on desert lions in the Damaraland region of Namibia. Rhino trekking in Damaraland, Namibia.

Going out with Elephant researchers in Samburu as part of Dr Iain Douglas-Hamilton’s Save The Elephant foundation. Visiting Khayellisha in Cape Town and seeing the upliftment projects which make such a difference. Moyowosi Game Reserve in Tanzania – 2 million acres of pristine wilderness with huge herds of wildlife and only one tented camp closed to your party – sheer bliss! Ruaha National Park – for wildlife, there is nothing quite like it!

Mbono in the Maswa region of Serengeti – wild, primeval – where wildlife is unused to tourists – the way it should be! The Caprivi Strip – Mahango National Park – such a pretty gem of a park devoid of the tourists early in the morning, and the most genuine San experience in Bushmanland in Namibia where one can spend time with the last vestige of this magnificent tribe.

Swimming with a pod of dolphins in Lamu, Kenya. Taking a dhow safari on the Quirimbas archipelago in Mozambique, camping out on different islands.  Bird Island in the Seychelles, where there is simply nothing to do, except to swim, fish and walk and read a book or make good conversation! Kurland, Ants Nest and Three Tree Hills in South Africa for families. Swimming with green turtles in Maputaland and in Kiwayu, Kenya. Catamaraning around Nosy Be in Madagascar and seeing the Indri Indri Lemur in Mantadia in Madagascar.

And in India; the backwaters, gliding on a kettuvallam houseboat. Himalayas – a walking holiday with a Sherpa guide in Kumaon at the foothills of the Himalayas and 360-degrees Leti with its amazing views of Nanda Devi. Madhya Pradesh, staying at a wonderful, intimate palace with the maharajah and his wife, and visiting the local markets. Viewing tiger in Kanha National Park and Pench National Park, Madhya Pradesh. Sitting in a private house on the Lake Vembanad in Kerala and walking to the top of the Cardamom Hills.

Riding on horseback along the Bhramaputra River in Assam; camel-trekking in the Thar desert in Rajasthan. Udaipur, the most beautiful city in Rajasthan, otherwise known as the Venice of India. Trekking in the Annapurna Mountains in Nepal; Looking at plants and magnificent birdlife in Chitwan National Park, Nepal.