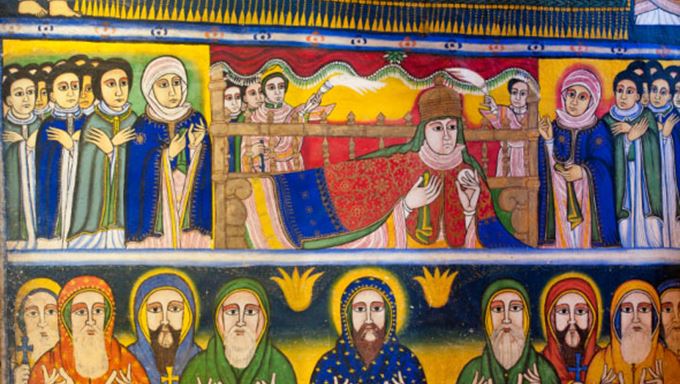 Axum lies in the northern Tigray region close to the northern border. This area is drier than the highlands and also has a very high number of churches and monasteries - there are over 400 stone in Tigray alone.

Visitors to Axum arrive here to see two major sites – firstly the Cathedral of Tsian Mariyam and secondly the stalae.  Tsian Mariyam is a fourth century church and the spiritual home of Ethiopian Orthodox Christianity. There are two churches of the same name – the old and the new, the newest being built by Haile Selassie.

Please note that visitors are not allowed to enter the church as it is sacred to only a very small number of selected priests. Only the most holy of priests can enter the inner sanctum as this is the supposed home to the Ark of the Covenant.

The first bishop, Saint Athanasius was consecrated in 330AD left his roots in Axum and it is believed that the gospel arrived here during the time of the Acts of the Apostles.

About 60% of Ethiopia’s population is Christian and there are two branches – Ethiopian Orthodox and Protestant. Though people of different religions are mixed across the country generally the Muslim population tends to reside in the south and west whilst he Christian population leaves mostly in the central and northern areas.

Until recent times there was also a significant number of Ethiopian Jews in Beta Israel until Operation Moses and Solomon rescue missions where carried out by the Israeli Government.

Also in Axum is the Tomb of the Mausoleum and the Mai Shum – also known as the Queen of Sheba’s swimming pool.

In Axum just outside the town, there is a site with seven stalae and although there are other stalae in the country nearer to Addis Ababa, none are as impressive as these.  The most impressive obelisk stalae measures over 33 metres high and weighs over five hundred tonnes. It is now lying on the ground and is broken.

The second largest stalae has an interesting history. Standing at 26 metres the obelisk was cut into three and during the Italian occupation it was cut and removed to Italy until its return to Ethiopia in 2005 after much negotiation.