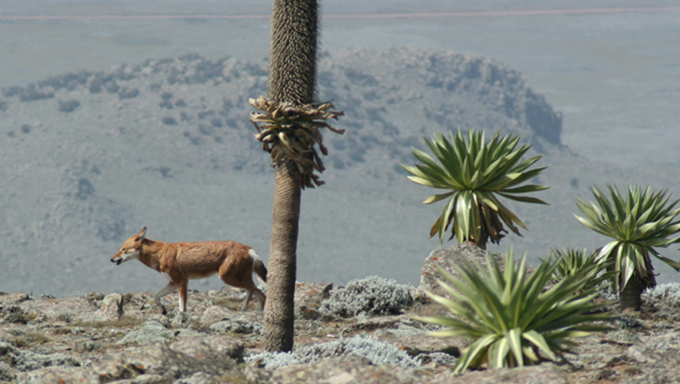 Extraordinary wildlife, highlands and forests and remote wilderness locations. The Bale Mountain National Park is incredible and one of the best in the country yet it is not visited as much as the Simien National Park. We recommend staying here at least five days, as the area is vast, varied and incredible.

Bale is home of the last remaining Ethiopian wolves, (probably at best only 350 left in the world), and it also is one of the best birding areas in the country. Currently on the short list for UNESCO status, the high altitude Bale Mountain plateau is where about 250 Ethiopian wolves live, feeding on giant mole rats and other small mammals. Within the park there are over 60 mammal species including dozens of endemic species and at least 265 bird species including Verreaux's eagle (Aquila verreauxii) , Spot Breasted Lapwing, Auger Buzzard, Black Headed Siskin and Tawny Eagle.

The vegetation and topography across Bale is extremely diverse with the largest afro montane moorland in Africa, alpine moorlands and the Harena secondary rainforest - all occurring within one park. The outer edges of the park have large rock pinnacles and at the top of the mountain there is a very large open plateau.  The park is large and covers about 2200 sq. kilometres. The central Sanetti Plateau also has the Rafu lava flow, a vast Afro montane moorland lying between 3500-4500 metres - beautiful, stark and barren yet seemingly filled with life and crystal gin clear lakes around which one sees the ducks and teals.

The terrain is has deep gorges and freezing alpine lakes and open plains dotted with white everlasting flowers.  It is a harsh environment to visit, let alone live in, yet is absolutely fascinating and one of the most mesmerising scenes. Apart from the endangered Ethiopian wolf, there is also the Abyssinian hare and golden jackal the Sanetti Plateau also has Blicks grass rat (end) and Starks hare (end).

Harena on the southern side of the National Park is the completely contrasting and where in 1995 a new monkey was discovered – the Bale Monkey.  Harenna Forest is still to be fully explored but animals that we know can be found include giant hogs, elephant and lion. New species are being discovered all the time.