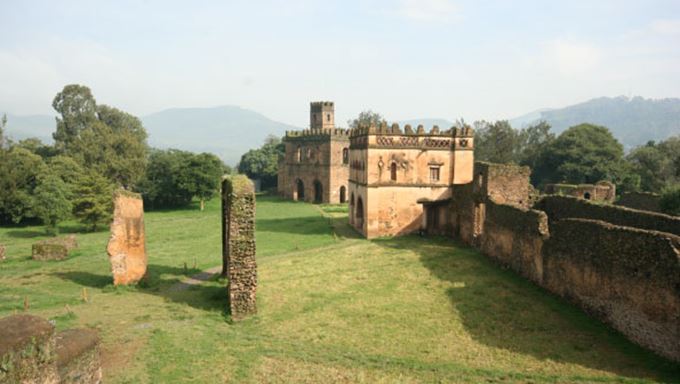 Gondar – Ancient Castles and Palaces - a UNESCO World Heritage site founded in 1635 by Emperor Fasilidas. Gondar is one of the main attractions in northern Ethiopia and is noted for its 17th century castle, the Fasil Ghebbi (Royal Enclosure). There are battlements and turrets and a collection of stone castles sitting in a grassy garden setting.

It is also where one will find the decorated Debre Birhan Selassie church, with its ornate painted ceiling of faces. There is also the Empress Mentewab pool, with its fig tree roots cascading down the walls and its gardens filled with birdsong.

Gondar city itself lies in north western Ethiopia near Lake Tana, in the Gondar Simien Zone, Amhara region. It sits at 2133 metres above sea level and at one time was the capital city of the Ethiopian empire. Founded by Emperor Fasilidas in around 1635, this city grew as the market and agricultural centre. Gondar is most well-known for its six palaces, the most well-known is Fasil Ghebbi – the Royal enclosure that lies in the heart of the city.

A following succession of emperors built more palaces alongside the seven churches that Fasilidas built. Many of these buildings still survive today, though some are not in their best state, as many of the churches were burnt down in 1888.

The city has a hilltop location and the story of its founding says that the Emperor was led to a spring where a reclusive man advised that Emperor to build his castle.  He did just that and built his castle right on top of the spring. For 250 years the city was capital until the reign of Emperor Tewodros. Gondar has a history of occupations and invasions the last being by the Italians in November 1941.

Traditionally Gondar divided its inhabitants by their religions, i.e. Addis Alem for the Muslim society and Kayla Meda for the Jewish community (they have since moved back to Israel).

A few minutes from the town lies the noted church of Debre Birhan Selassie with its gorgeously painted ceiling of angels. Inside Gondar are markets and there is a faint influence or Arab and the baroque style from the Jesuit missionaries.

Gondar is one of the main centres to celebrate the Timkat festival (the Ethiopian Orthodox Tewahdo churches Epiphany), where visitors flock to Fasilides Bath, a vast river fed rectangular stone pool which is filled for the occasion.

Other noted palaces are Iyasus Palace, Dawit Halls, Empress Mentewabs castle, the Library Castle of Tzadich Yohannes, Ras Mikael Sehul’s Palace and the Banqueting hall of Emperor Bekaffa, and the music hall. There are also stables in the 900 metre enclosure wall.  Outside is the Gorgora monastery and Maryam Ghemb. The enclosure is accessed through 12 entrances and there are four bridges too.

Gondar is well worth a two or three day visit!