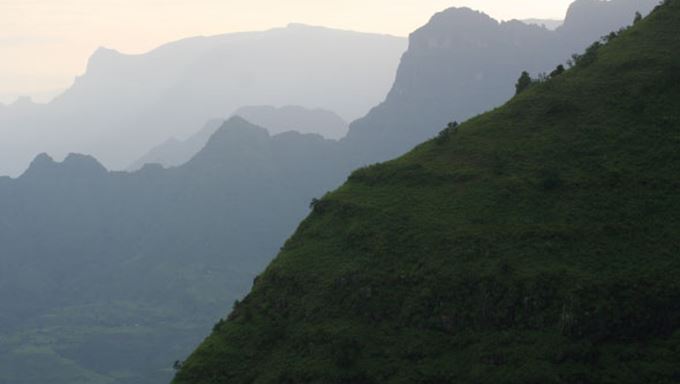 Iconic Ethiopian landscapes and wildlife - The Simien Mountains, known globally as a UNESCO Universally Outstanding Valuable Park, is actually visited by few people, though numbers are increasing and so they should as this is one of the most beautiful mountain ranges in the world.

It is also a noted World Heritage Site which is in Increasing Danger. Those that visit find it hard to leave, such is the exquisite surroundings and landscapes. Meaning ’north’ in Amharic, the views are incredibly impressive. The Simiens attract adventurous visitors, those that want to trek through remote landscapes and test themselves at high altitudes and also to intrepid explorers looking for glimpses of rare birds and wildlife and to get close to the gorgeously hairy gelada baboons (Theropithecus gelada).

Good for birding, there are also some remaining endangered Ethiopian wolves, though they are rarely seen and are the rarest canid species in the world.   The Simiens National Park, established in 1969, (13600 ha) is home to Walia ibex, an endangered wild goat with an impressive set of horns, klipspringer, caracal, bushbuck, Hamadryas baboon, and Starck’s hare and the impressive lammergeier vulture.

These vultures lift bones high into the air from carcasses that they find. Then they drop them to the ground thereby splitting the bones exposing the marrow – so much easier to access and eat.

The national park has about 130 species of birds including the thick billed raven.  Short grasses, heathlands and flowers cling to life on the plateaus along with Giant Lobelia (Lobelia rhynchopetalum) and on the sides of the mountains thick ferns, orchids and vines provide a tropical lushness.

The Simiens are part of the Afro alpine centre as well as eastern Afromontane biodiversity and have high plains and plateaus, deep valleys, with drops of 1500 metres, craggy pinnacles and tall waterfalls such as the one flowing into the Gishe Abbai. These mountains lie in northern Ethiopia in the Gondar zone, part of the Amgara region, and south of Axum.

The highest peak in the country is located here – Ras Dashen is 4550 metres but there are other impressive peaks – Mount Biuat (4437 metres) and Kidis Yared (4453 metres).  The mountains were formed in an almost unique way, by massive erosion, so only the Drakensburg Mountains in South Africa are similar. Sheer cliffs guide your view far below down into the valleys – the views are truly impressive and take ones breath away, much like looking down into a vast canyon.

It also snows regularly in the Simiens, one of the few mountains in Africa where this happens and over the centuries various explorers have noted this in their explorations including Jeronimo Lobo – a Jesuit priest and Henry Salt in the 19th century.

Apart from walking, bird watching and trekking, visitors can also visit various villages that are linked by small tracks and trails. Shepherds guide their sheep and goats across freezing, often misty landscapes wrapped in blankets. They are always looking to sell colourful woven woollen hats to visitors.   The national park headquarters are based in Debarq from which dirt tracks and roads lead to various lookouts and villages.