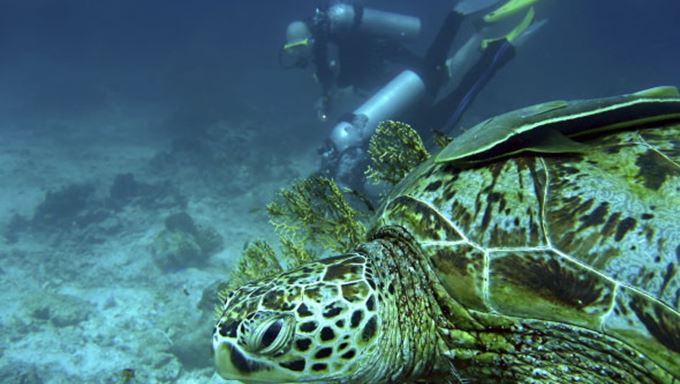 Hawksbill turtles Eretmochelys imbricata, with their large pointed bills and translucent shells are magnificent creatures that come to nest on the islands of the Seychelles.

The best chance of seeing them is on the granite islands, such as La Digue and Praslin. There are seven species of sea turtles and Hawksbill belong to the family Cheloniidae.

Hawksbill mate in shallow waters and then start laying their eggs in earnest between November and February, with the hatchlings emerging from shallow sandy pits where their mothers laid their eggs 60 days previously.

They hatch from January to early April.  On hatching, life starts with their most dangerous few minutes as gulls and crabs try to grab these beautiful tiny and highly vulnerable creatures as they scramble as fast as their small fins can manage across the sands, dodging sharp beaks and strong pinchers.

Found throughout the world’s tropical oceans, hawksbill turtles grow to about one metre in length and weigh in around 70 - 150 kilograms. These turtles unlike other species do not like deep waters and thus they prefer staying in shallower waters so that they can feed on sponges they are the only turtles that features sponges as their main source of food.  However they are actually omnivorous as they also like fish, shellfish and molluscs, jellyfish and marine algae.

Cousine Island is one of the main small and selective islands that the Hawksbill chooses to visit and nest. Cousine is actually a protected zone where researchers, volunteers and wardens have been monitoring the turtles for many years, noting nesting sites and guarding each valuable nest.

As they also like to spend time on secluded quiet beaches, Cousine makes for one of the best sites to see these beautiful animals. Not only do they monitor the turtle’s nests, they take measurements and note individual females that have returned to the island.

A small metal tab is attached to the front flipper which enables them to identify individuals. This way they build up a picture of the turtles lives over the years. Females may lay two to five clutches of 120-200 eggs every two to four years.

Hawksbill like most turtles around the world are highly endangered, over-fishing, eating plastic bags (mistaken for jellyfish) and poaching are the causes as well as getting caught in fishing nets. Turtle shell is also sort after by poachers.

Humans also eat the eggs, so protecting nesting sites around the world is of major importance. However in the Seychelles they are a protected species by law. The Seychelles Government depends almost entirely on tourism and everyone loves the nature, sun, sea, snorkelling and diving to see these and other sea creatures.

As the small turtles emerge – about 3 centimetres in length and weighing only five grams their upper shell is heart shaped.