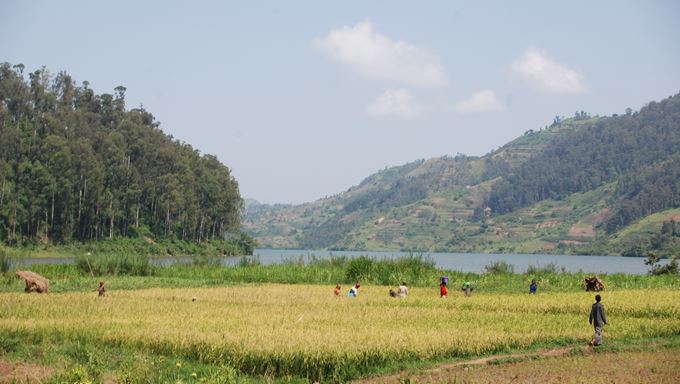 Akagera adds a safari element to a visit to Rwanda. The national park has been named after the river on its eastern boundary. The river feeds several lakes, one of which is Lake Ihema. Akagera covers around 1122 square kilometres.

The park has many facets – from the lakes to the acacia and Brachystegia woodlands, reed beds, swamps and open grassland savannas, therefore offering biodiversity and different habitats for the wildlife that exists here. The highlands of the Mutumba Hills look over the lakes.   It is a hauntingly beautiful and pristine region where few tourists are encountered.

Whilst in previous times the numbers of wildlife decreased in the park, due to tremendous efforts by Africa Parks, sponsorship and the Rwanda Development Board,  the numbers are increasing at a tremendous rate, so much so that now there are around 12,000 large mammals and 482 bird species in the park as well as three established camps and a new luxury safari lodge opening this year.  18 Black rhino and lion have been introduced and are doing extremely well with young being born since.

Akagera has the only protected savannah in the country and this is home to elephants, topi, sitatunga (Tragelaphus spekei) – a water kudu with splayed hooves suited to living in reed beds and papyrus belts, Bohor reedbuck, oribi and duiker, roan antelope, buffalo, bushbuck and impala.

Even the statuesque eland – the largest antelope in Africa can be found in Akagera. Olive baboons and vervet monkeys roam the plains and woodlands and at night bush babies (galagos) can be seen leaping amongst the trees in search of juicy insects.

With regard to other predators – only hyena and leopard are in this park, unfortunately the lion populations have disappeared, but there are smaller predators around like mongoose, the beautiful serval cat and side striped jackal.

Because of the different habits of Akagera, there is good birdlife too – about 720 species have been recorded in the country of which about 500 have been sighted in Akagera itself.  For avid birdwatchers, the rare and prehistoric looking Shoebill stork (Balaeniceps rex)  is often seen in the swamps along with cormorants, bitterns and darters, jacana, avocets and stilts, whilst in the dry lands  are lapwings, flycatchers, weavers and guinea fowl.  The papyrus gonolek is a bird to look out for in the wetlands! Akagera is an important ornithological site.

Visitors to Rwanda tend to include a visit to Akagera as part of a circuit also featuring Nyungwe Forest with its primary forest, Lake Kivu and of course the Parc de Volcans – montane forests and vegetation for trekking to see Mountain Gorillas.  Akagera lends itself to a two to three night stay enjoying nature and game drives in the park which is such a contrast in environment to the western side of the country.

In August 2010 an aerial survey was conducted over Akagera and it showed that positive increase in the numbers of animals which is very promising news, something that the Rwanda Government is keen to support as this in turn entices more tourism opportunities.

Some images by courtesy Kamageo