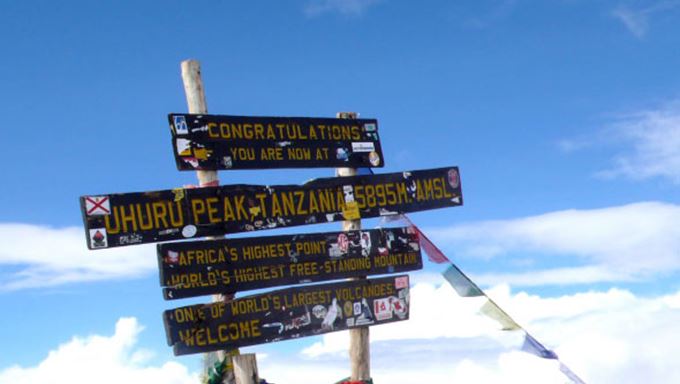 Tanzania’s two big mountains, Mts Kilimanjaro and Meru, together form one of Africa’s most interesting hiking and climbing opportunities. Situated only about 50 miles (80 kms) apart the two mountains rank within the highest mountains in Africa (the actual rankings vary depending on how one classifies the Rwenzoris) with Kilimanjaro not only being the highest but also the planet’s tallest freestanding mountain.

However the two mountains are quite different. Much has been written about Kilimanjaro and it is a very popular mountain climb in Tanzania to the extent that more than 25,000 people each year try to make the climb to the 19,341 ft Uhuru Peak summit, using some 7 different routes including Marangu, Machame, Shira, Lemosho and Rongai.

There are shared similarities between some of the routes, especially the descents on the most popular. As a rough guide between half and two thirds of those who try to summit Kilimanjaro succeed, with altitude and low temperatures being the principal causes of an inability to reach the summit.

Depending on the route chosen it takes between 5 and 9 days to climb and descend Kilimanjaro although there are two given facts which affect summiting success rates that every climber ought to be aware of; to go slowly when climbing and to allow as long as possible to make the climb. The latter is born out by Tanzania National Park’s statistics which show that under half of those who attempt the climb in 5 days, which is less expensive, reach the summit whilst over three quarters of those who take 8 days or more make it to the peak – this is mostly an issue of altitude acclimatisation.

But whilst, for instance, the Shira or Rongai routes up Kilimanjaro are lovely, if you want an interesting, varied, un-crowded, relatively straightforward, utterly scenic and totally memorable trek/climb then Meru ought to be on your list.

A climb of Mt Meru also includes one of the most spectacular paths in Africa and as an added inducement, is possibly the best “warm-up” for a Kilimanjaro climb so long as one commences the Kilimanjaro climb immediately following the descent of Meru. This however does not make Meru “easy” and the final approach to Socialist Peak - 14,980 feet - is more difficult than the summit day on Kilimanjaro and the altitude still plays an important part in the climb.

One of the joys of a Meru climb is the scenery and surroundings, which one often has virtually to oneself. Climbs of Meru usually take four days in total, including descent, although it is possible to do it in three at a lower cost, but it’s less enjoyable to rush it and the savings differential is therefore questionable in terms of value.

Meru is an intrinsic part of the verdant and gorgeous Arusha National Park and the first day of the climb is spent in the varying forest zones which are populated by wildlife and which is why an armed ranger is mandatory on Mt Meru treks!

The second day sees climbers eventually emerge into the higher Alpine moorland which then turns into montane desert and it is usually possible to take a side trek to the Little Meru summit. On the final climb day one is faced with inescapable reminders that this is a volcanic region; the path becomes a spectacularly ridged narrow mountain causeway near Rhino Point with some more challenging, but not technical climbing and the views of the sheer cliffs and ash cone.

These are all that is now left after the entire eastern side of the mountain was blown off in an eruption a couple of hundred thousand years ago, making the effort more than well worthwhile. Watching the sun rise over Kilimanjaro to the east and then descending with the absolutely gorgeous views has to be one of Africa’s most overlooked experiences.