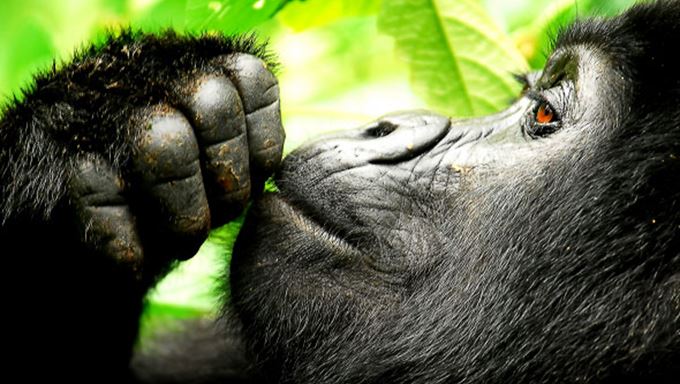 Bwindi Impenetrable National Park is one of the last vestiges and homes to the Mountain Gorilla (Gorilla beringei beringei). This incredibly beautiful park is a key site for outstanding and exceptional biodiversity.

The Montane forests with their steep hillsides lie within the eastern edge of the Albertine Rift Valley. Bwindi is home to over 400 Mountain gorillas as well as a wealth of exceptional biological magnificence with fauna, flora and endemic species.

Certain carefully chosen gorilla families have been semi habituated by researchers to accept human visitors for one golden hour per day.  Strict rules must be adhered to in order to minimize the risk of transferring diseases and infections like colds and coughs.

The treks start early in the morning and groups of no more than eight intrepid visitors are led through the forest on small tracks before branching out into the forest hacking through the densely packed herbs, scrubs and vines.  The magical hour sitting watching these black haired magnificent animals is peerless. One can see just why only a few percentage of DNA separates us – not much, and it shows!

You sit and watch how the youngsters interact and play whilst the females and sub adults feed on bamboo and other plants (up to 80 different plant species make up their diet). The families may be in clearings surrounded by the hanging vines trailing down to narrow valleys below and you can listen whilst they grumble at each other and marvel at the sheer size of the dominant male, the silverback.

The treks can vary in length – sometimes three hours, sometimes six – it entirely depends on where the gorillas are. A video camera is an absolute must to capture the sounds and views of the gorillas.

After your day spent in the forest with the gorillas, return to your luxury accommodation, kick off your muddy boots and enjoy a well earned massage! Small safari styled lodges are beautifully located around the outside of the park providing well earned comforts but also a place to sit and listen to the sounds of the surrounding villages and people that make their life in this jungle area.

Besides the gorilla treks, Bwindi offers so much more including extensive walks and pathways through the forests that can lead to hidden waterfalls  surrounded by vines and wild flowers. There are also other animals including those rarely seen such as forest elephants, and monkeys - L’Hoest and mantled guereza (commonly known as black and white colobus).

Fundamental to all this is of course is the forest that supports all of these species including over 200 tree species, 10 of which are endemic. Around 350 species of birds have been identified here, and 200 species of butterflies. Notable birds include African green broadbill, Chapin’s flycatcher, red throated alethe and Fraser’s eagle owl.