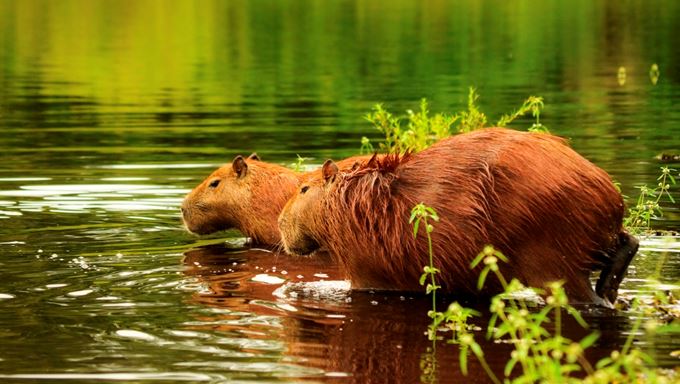 The incredible Pantanal wetlands offers the opportunity to see some unique wildlife, from a likely encounter with a jaguar in season to caiman, capybara and a host of spectacular birds and other mammals.

The Pantanal is the largest continuous stretch of wetland on the planet, having been declared a World Heritage Site and Biosphere Reserve by UNESCO and forming arguably South America’s primary wildlife sanctuary. Discover some 700 bird species, 100 species of mammals and reptiles respectively, and over 250 species of fish.

In the northern Pantanal, from Cuiaba, combine a stay at a comfortable lodge in the wetlands, where you may spot capybara, giant anteaters, caiman, peccaries, howler monkeys, as well as many bird species, such as hyacinth macaws and jabiru stork, with more primitive accommodations in dry season, such as houseboats or simple camps for potential sightings of big cats like puma and jaguar along the Cuiaba and Piquiri rivers.

The lodgings may be basic but the sightings of cats, river otters, anaconda and many more are quite magical. We have sourced the very best options that this region can offer, from a new more comfortable houseboat this season moored in the Piquiri River area, enabling you to head out by boat with less journey time to the premium wildlife area but also return to your very well-appointed boat nearby to freshen up and have lunch during the day and then return to Cuiaba by air on an incredible scenic flight across the wetlands themselves.

Equally, we have sourced some of the areas most charismatic and experienced guides and hosts in an area where wildlife conservation and tourism to spot wild cats is still in its infancy. If having the very best accommodation possible is less important to you than having the sighting of a jaguar on the riverbank to yourself, then we can also take you into a remoter region of the Paraguay River.

The southern savannah may not boast the chance of jaguar sightings but the many different species of wildlife are otherwise the same including unique species such as giant anteaters and tapirs. Accessible from Campo Grande, the southern Pantanal offers you some beautiful lodges in dramatic settings, many of which can be reached either by road or by small aircraft.

Because access to these lodges is easier, the southern Pantanal makes a wonderful base from which to discover its flora and fauna for families in particular, especially when combined with Bonito, where you can float down slow rivers among vividly coloured giant river fish and explore hidden waterfalls and caves.