How has Zakouma in Chad become a 'sustainable travel' success story? 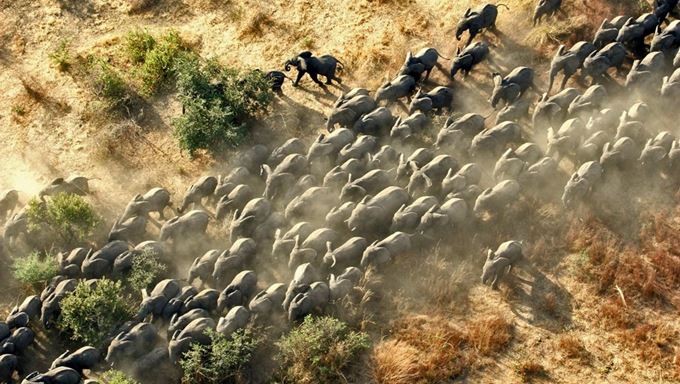 For the experienced, adventurous traveller, always on the lookout for something new, here is the perfect journey incorporating the finest wildlife in a pristine environment with nomadic tribes of the Sahara, geological wonders, vast desert dunes and monoliths, all experienced in total exclusivity and privacy, guided by a professional photographer!

Zakouma National Park in Chad is the last intact Central African savannah ecosystem, where I have heard lions call each night, where I have witnessed leopard whilst on foot during broad daylight and where I have watched the skies darken with murmurs of over a million red billed quelea, trying to escape from the talons of the yellow billed kites who swoop into the black mass.

As the world starts to feel smaller, travellers start pushing the envelope in a desire to get off the beaten track and become more in tune with the African continent.

Even in Africa, this is becoming increasingly difficult to achieve as previously-known remote areas become completely accessible with ease – removing the mysticism and beauty and increasing tourist numbers.

But here one stays at the impossibly romantic Camp Nomade, just a handful of beautiful, gauze tents, allowing one views right across the Rigueik pans where flocks of two thousand black crowned cranes dance, pelicans and doves fly in great numbers and a large variety of antelope come to graze.

With the restoration of Zakouma National Park, travelling to the truly remote wilderness has become possible. But even better still, the experience is elevated as Zakouma operates on a philanthropic basis.

Every safari entering the park directly benefits the local community – of which African Parks employs 200 people. This means that when you travel here, the impact you have is measurable. The park fees are contributing towards the rangers and the anti-poaching initiative as well as the local community as a whole.

A number of new schools have been built in areas within the elephant migration zone and in 2016, 1,267 children received education from Zakouma-supported schools. Subsequently, since African Parks’ involvement in Zakouma National Park in 2010, this now serves as one of their greatest success stories.

What wildlife can you see on a safari to Chad?

The Zakouma Greater Ecosystem is home to 30,693 square kilometres of which Zakouma National Park makes up 3049 square kilometres of pristine wilderness, supporting a wonderful array of wildlife. This region is probably the last stronghold for wildlife in the western and Central African region.

The elephants in Zakouma are being fiercely protected - since 2011 no elephants have been poached in the park and over the last two years, around 135 new elephant calves have been born, marking a turning point for Zakouma’s elephant population. As the population gently increases, it is now possible to see large herds of over 500 elephants!

One can also see enormous herds of buffalo up to a thousand strong. They have an excellent resident pride of lion, good numbers of the Kordofan giraffe (50% of the entire Kordofan population live in Zakouma) zebra, Defassa’s waterbuck, Lelwel’s hartebeest and the beautiful and fairly rare Roan antelope, together with a wonderful array of birdlife (over 373 species recorded) – and if you time it right, you can see the beautiful and vividly marked carmine bee eaters which return to Zakouma in March.

Why is a safari to Chad a life-changing experience?

The joy is that for regular safari goers, Chad shakes them out of their comfort zone as one is seeing entirely new species of antelope and giraffe not encountered on safari anywhere else in southern or East Africa. A safari here is reminiscent of Africa 100 years ago.

Safaris are conducted by open vehicle and on foot, where one learns so much more and feels at one with nature. There is also a fabulous cultural aspect where one can see villages which are entirely untouched and unused to tourists.

Visit the vibrant cattle markets where jewellery and trinkets can also be found, witnessing Arab caravans, traders coming to market on their camels, replete with their Bedouin camps in tow.

One can reach Chad relatively easily from Paris or Addis Ababa and it makes a wonderful combination with Ethiopia. Safaris to Chad depart in February, March and April and can either be taken on a private basis (one takes over the camp exclusively), or one can join a group of a maximum of eight guests – led by two of the top private guides in Africa.

The safari element lasts for a week, starting off with the first night at Ndjamena, the capital, staying at an excellent hotel, and then flying by private charter into Zakouma.

One then spends a week at Camp Nomade, in this wildlife concentrated region, with a couple of nights fly camping (in my case, we wanted to see the large herds of elephant that had moved along the Salamat River and we drove through the park to the other side, where we were rewarded with two days of elephant viewing, even seeing the elephants coming up to the ranger station for water!).

Since the expansion of the park this year, wild dog can be found further north in the Park and again, may be a reason for moving camp.

Extend your safari to Chad!

Another fantastic option is that one can now combine the Sahara desert with a safari to Chad at Ennedi. It’s a four hour flight where you land at a characterful Saharan village formed by houses made of banco, gathered around the old French colonial fort. The inhabited centre is situated in a verdant oasis with numerous date-palms.

Discover beautiful Tassilian sand formations, taking odd shapes of castles and cathedrals grazed by winding tongues of sand. The landscape is incredible. Lakes surrounded by palm-groves that spring up from the sand, rocky formations of multi coloured sandstone from white to red and golden dunes that descend to the water.

But it’s the cultural element which is so compelling and now with fabulous accommodation and guiding, one can spend a week here which makes the perfect combination with Zakouma.

How did Zakouma in Chad become a Conservation Success Story?

Due to the past heavy poaching of elephant in the Zakouma eco system, which saw almost 4000 elephant killed between 2002 and 2010, the Chadian government, together with the EU stepped in and approached the African Parks network to take on full management and responsibility to put an end to the poaching.

African Parks is a non-profit conservation organisation, formed to protect and rehabilitate some of the largest reserves in Africa in partnership with governments and local communities.

Within a year, African Parks had implemented an elephant protection programme across almost 15000 sq kms, which included elephant protection during the wet season. Understanding elephant movements was crucial and to this end, elephant GPS collars were fitted on individual herds at a cost of $4000.00 per collar. Today there are 29 functioning collars, which provide the exact positions of the elephant herds every few hours.

The development of anti-poaching patrols is activated daily from a control room that tracks the movements 24/7. An extensive digital radio vhf system was put in place to providing good communication and patrol methods are continually adjusted and information-gathering improved.

A dedicated aircraft was deployed for extensive anti-poaching surveillance as well as aerial monitoring and resupplying of rangers in the field. Additional airstrips have been made in the park to extend the range of monitoring and to provide support during the wet months when most roads are impassable. African Parks have also increased the number of rangers employed, provided them with better equipment and trained them to the highest standards.

A school building programme commenced in 2013 to assist with education in the region and communication with outlying villages was made possible through a village radio system which allows for daily radio communication with certain strategic villages around the park and the control room.

I would love to discuss Chad further with you, contact me here!

Background image, Image 5 of giraffe, image 6 of wildlife around the water and image 7 of elephant drinking courtesy of and copyright to Maureen Kirk.