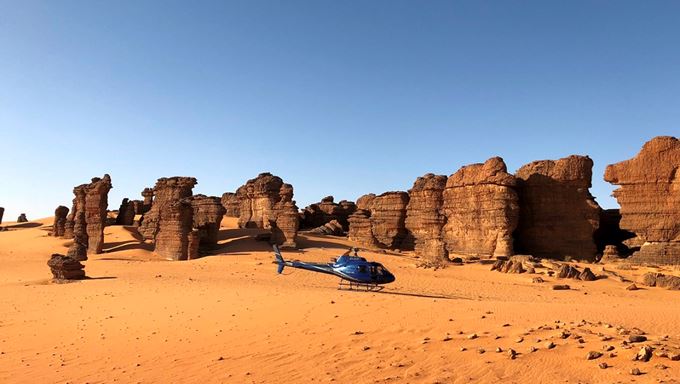 Chad is one of the most spectacular countries that I have had the pleasure of visiting! It harbours the little-known Zakouma National Park, in my opinion one of the best locations for a wildlife safari in the whole of Africa, and now it is possible to venture into the visually stunning Ennedi and Tibeste regions in the north of the country, which sit amongst the desert sands of the Sahara. This offers one of the most exclusive and exciting travel experience there is to be had, anywhere in the world.

I highly recommend that serious explorers consider taking this helicopter safari to Chad’s Sahara, truly immersing yourselves in the spectacular Sahara Desert with all the geology, wildlife and historical wonders that it has to offer, many of which are never seen by the outside world. 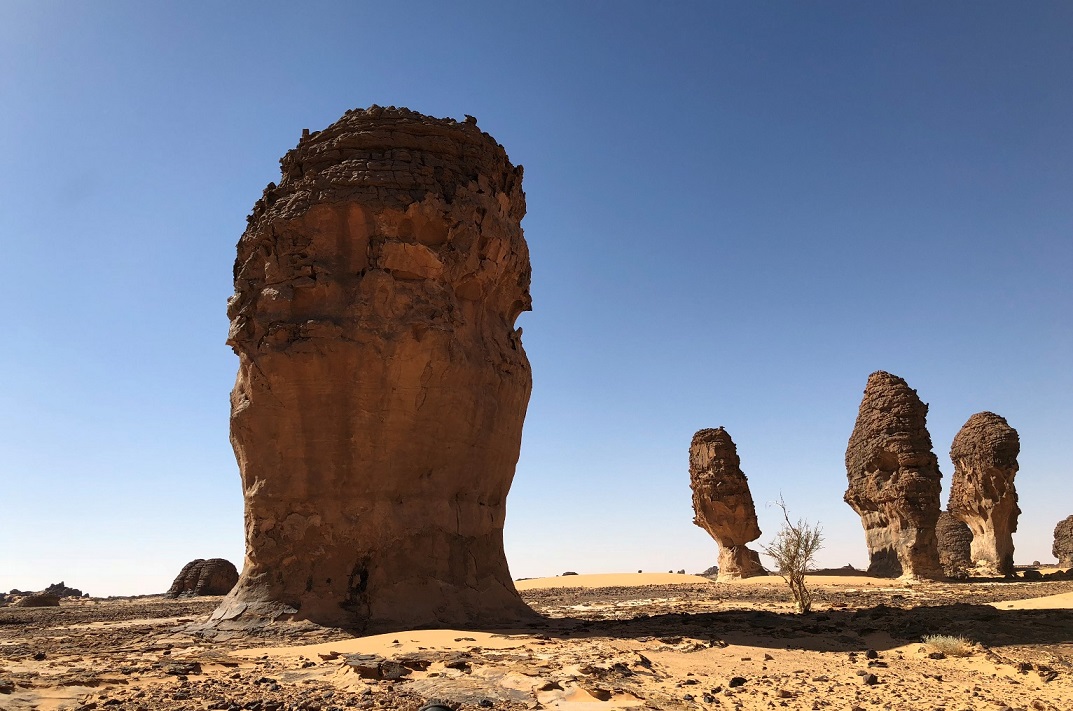 For me, the Ennedi region is such a spectacle, filled with geological features that look like they belong on an alien planet. I have stayed in simple yet comfortable fly camps, situated in the shade beneath these sandstone structures that tower overhead, and had the fortune to meet the nomadic Tubu people who make this part of the Sahara their home. Some have settled and raise livestocks from small homes made from bundled grasses, but others still live a nomadic lifestyle.

Why is a private helicopter safari the best way to experience Chad’s Sahara Desert?

The Sahara desert is legendary, yet so few people ever get the chance to see the ‘real’ Sahara for themselves. Day trips and over-night camping excursions from North African tourist cities may give one a taste, but what if you want the exclusivity to explore the almost-undiscovered wonders, alongside the freedom to do and see exactly what you wish?

The Sahara isn’t endless sand dunes bereft of life as one may imagine from popular culture. There is so much more to see here, from other-worldly sandstone structures, lush oases, volcanic mountain ranges, ancient rock art and fascinating nomadic culture. 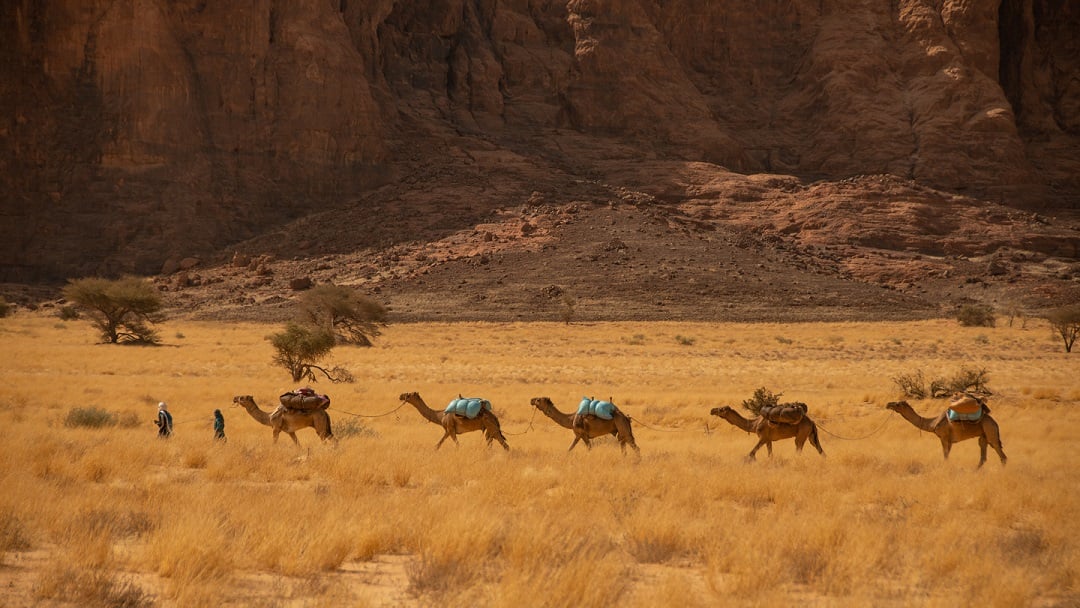 With only around four trips available per year due to tight restrictions on visitors, only a handful of people may have the opportunity to experience this dramatic and breath-taking landscape in their lifetimes – this safari is unique and exclusive!

You will also have the rare benefit of being able to ‘make it up as you go along’; the helicopter and pilot guide are there to take you on exactly the journey that you wish for, exploring the regions that interest you the most. Here, you only have yourselves to please; no set itineraries, no route maps, only freedom!

Which are the best highlights everyone should experience?

There are a number of highlights that one may choose from for this helicopter safari. In general I find that spending five nights in each of the two regions gives one the best chance to get the most out of the journey. Split your time between two camps in the Tibesti Mountains and spend another five nights in Ennedi Massif region, staying at Warda Camp and a desert fly camp.

Warda Camp itself is simple but offers a level of luxury not usually found in places as remote as this. It comprises of just eight tents, each with its own private shower and field toilet. There is also a central mess tent with areas to meet and relax.

This is the beating heart of camp life where you will gather and share your experiences of the day and hear stories from your local and knowledgeable guide. You will also spend some days exploring further afield in the Mourdi region and stay in a fly camp. 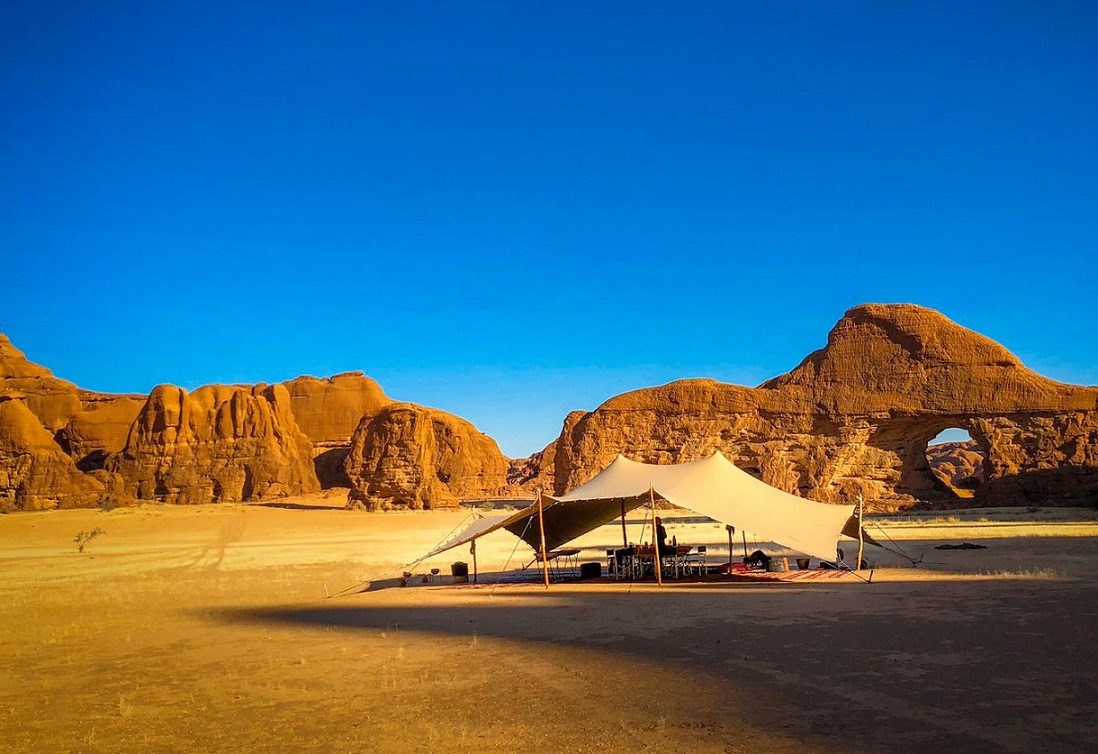 Where are the best locations to visit in Chad's Tibesti Mountains?

The massive deserts in the north of Chad are broken up by the breath-taking Tibesti mountain range. This volcanic massif is the most prominent feature of the Sahara desert, sprawling 480km across the border into Libya. Some of the higlights of the Tibesti Moutains include: 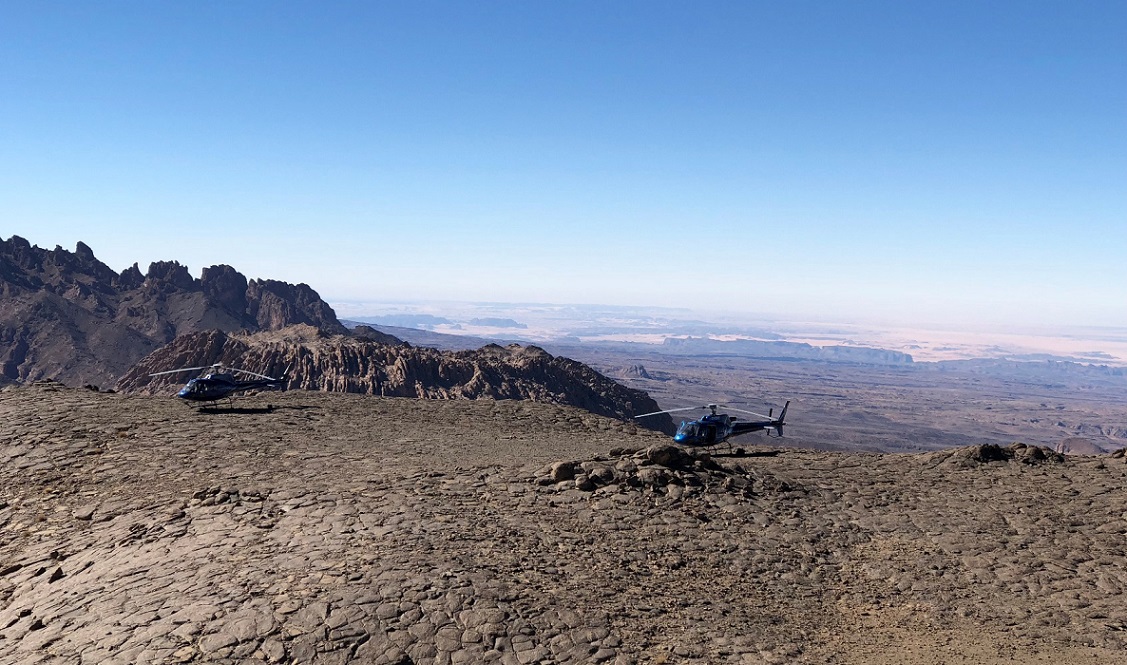 Where are the best locations in the Ennedi region?

The Ennedi Region is known as the Sahara’s Garden of Eden! Here one finds the most fascinating and unique geological features, sculpted over time by water and wind into a spectacular plateau. 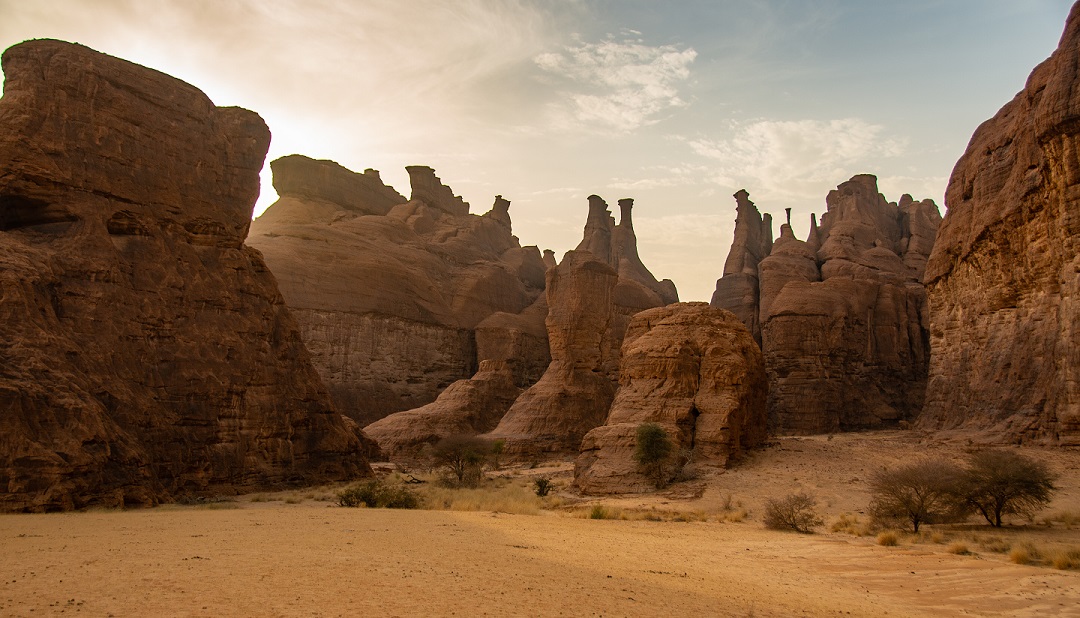 See for yourself the canyons and valleys, and hundreds of natural arches, spires, pillars and columns which rise up to 1,450 meters from the deserts of the Sahara that surround it on all sides. The water that is found in the largest canyons supports the delicate ecosystems here, as well as human life over the course of millennia, evidenced by the many examples of ancient rock art found. We stayed in Warda Fly Camp which was ideally located for our adventures. 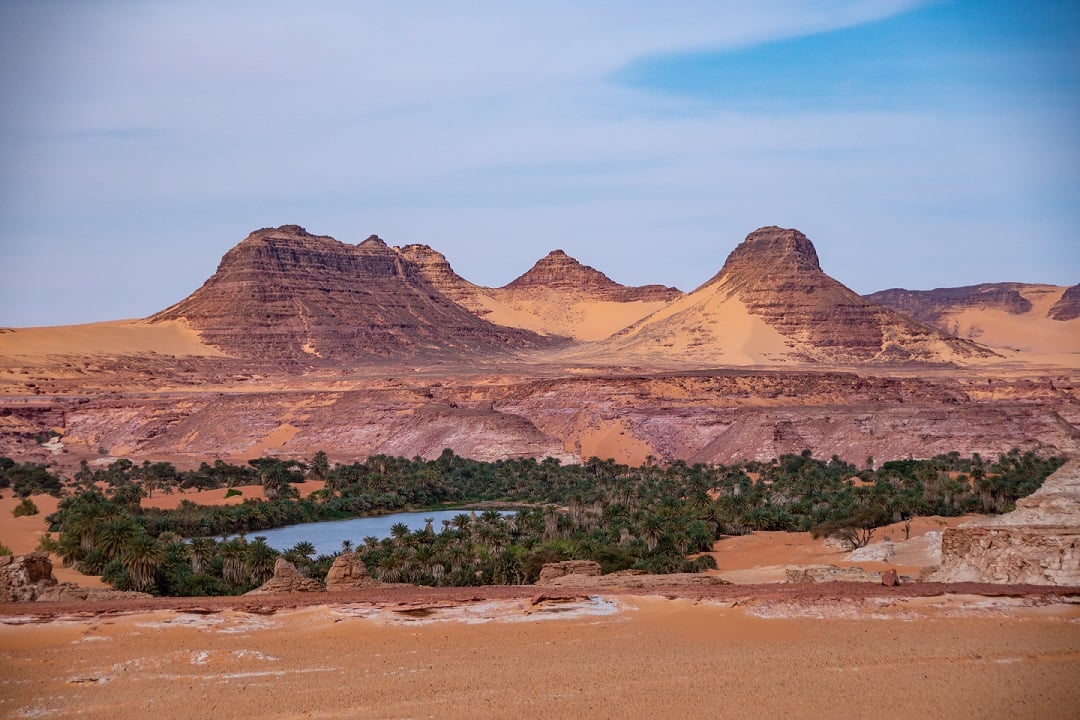 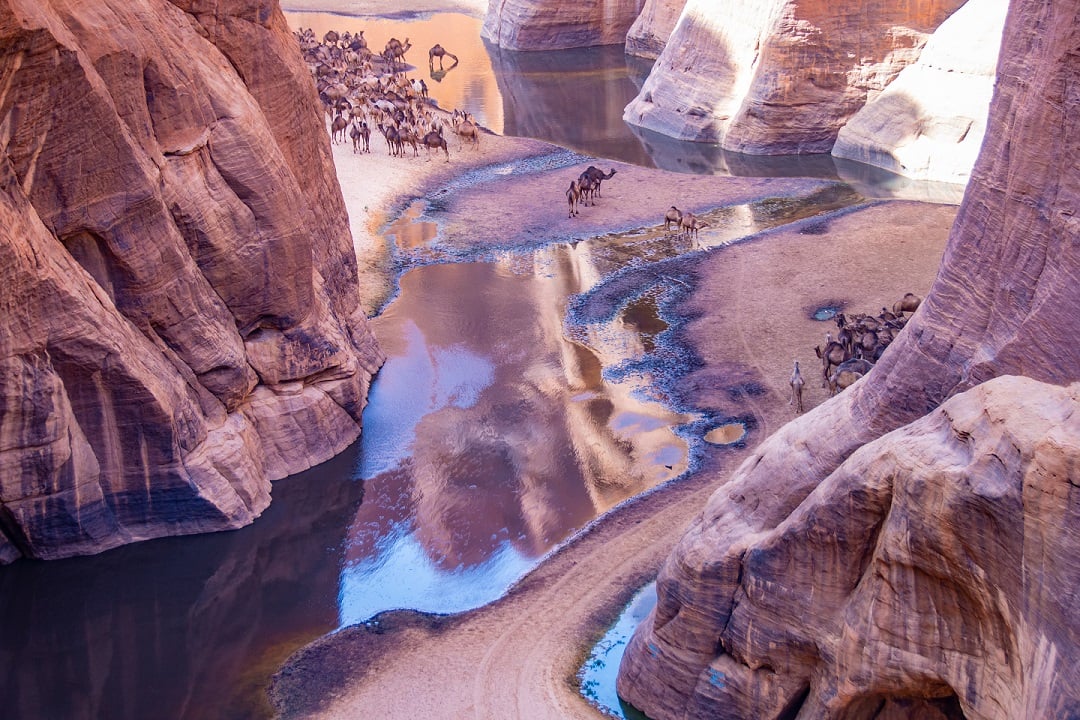 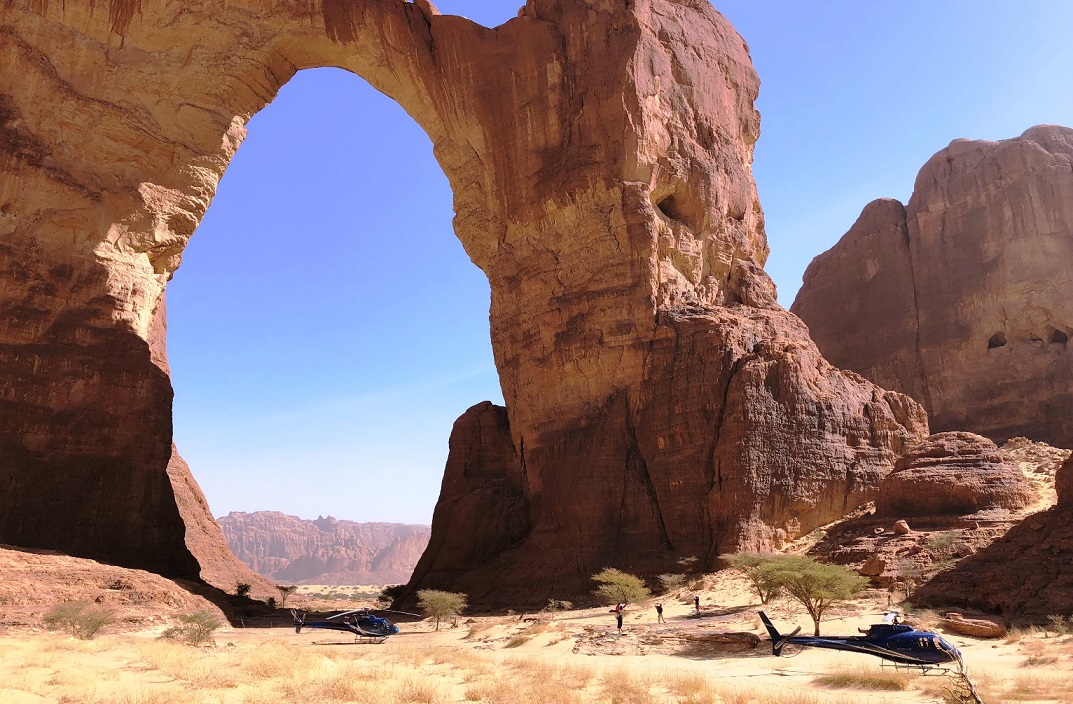 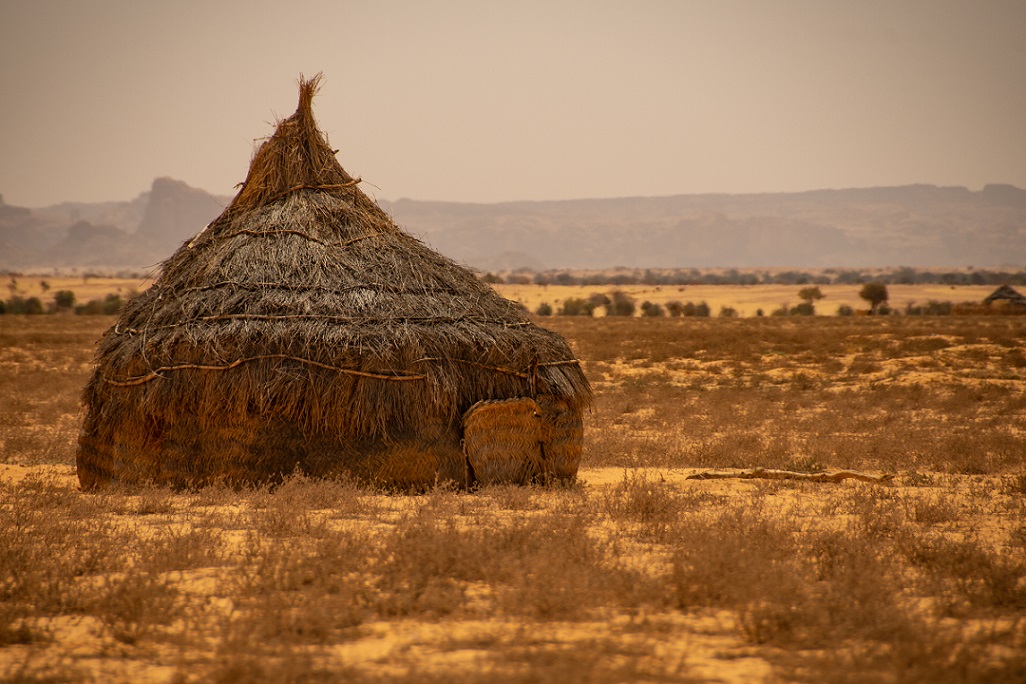 How Do You get to Chad’s Sahara Desert?

One can fly into the international airport in Chad’s capital, N’djamena and then take a shared caravan flight to meet your private helicopter at your starting point. There are direct flights to N’djamena from Addis Ababa, Ethiopia (4 hours) and some from Paris (6 hours).

When is the best time to visit Chad’s Sahara Desert?

The Northern Hemisphere’s Spring and Autumn bring the most comfortable temperatures, where it is neither too intensely hot during the day nor too cold at night. It is possible to travel outside of these times but one must be prepared for daytime temperatures of around 40ºC between May and October, and cooler nights over the winter.

If extending your holiday to include a visit Zakouma National Park, one should avoid the wet season when it is often entirely flooded and cut off. The wet season runs from June until October.

The Explorations Company specialises in tailoring adventures to remote regions and there are many potential options for luxury tented camping safaris in inaccessible regions. If you would like more information on Chad, remote luxury mobiles or fantastic flying safaris all over the world, please do get in touch! Alternatively, if you would just like to dream for now, you can do so at our Video Library.

** This blog was originally posted in November 2019 then updated and refreshed with new information and reposted in October 2021.**