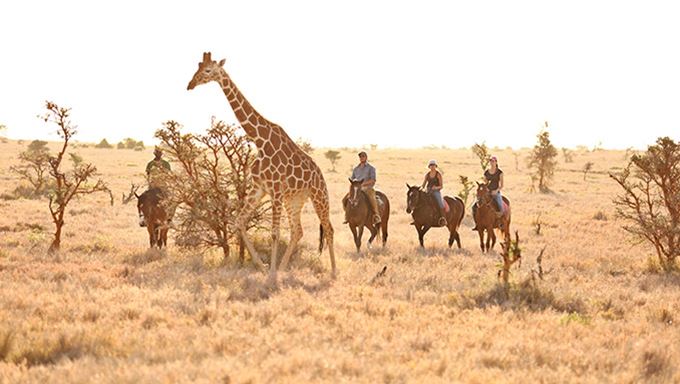 Recently featured in the Robb Report, the Lewa Wildlife Conservancy was created in 1995 and works as a catalyst and model for the conservation of wildlife and its habitat. It does this through the protection and management of species, the initiation and support of community conservation and development programmes, and the education of neighbouring areas in the value of wildlife.

The result, from a wildlife and conservation perspective, is a huge success!

Lewa has had zero poaching for five years now – fabulous!  The conservation initiatives have also resulted in significant births of wildlife - each year, about 12 lion cubs are born along with 60-70 of the endangered Grévy’s zebra foals and around 14 rhino.

The area has become home to the less common Rothschild giraffe and has a healthy population of buffalo which has increased around 30% year on year.  They regularly collar hyena and lion and we have arranged for our clients to be part of official lion collarings as part of their conservation focused safari.

The rhino is one of Africa’s most threatened animals, despite efforts at both national and international levels to stop poaching and end the illegal rhino horn trade. The black rhino, Kenya’s native species, is critically endangered, with approximately 5,500 individuals left on the continent. Most of this population, about 98%, lives in South Africa, Namibia, Zimbabwe and Kenya.

Rhino conservation (which includes both the black rhino and the less endangered white rhino) remains high on Kenya’s, as well as Lewa and Borana’s, conservation priorities.

These successes were mirrored at a national level. In Kenya, rhino poaching has dropped from 59 animals at the height of poaching in 2013 to 10 animals in 2016.

Lewa, a UNESCO World Heritage Site, serves as a safe refuge for rhino, elephant, Grevy’s zebra and other iconic species in Kenya. 1200 elephant use the underpass crossings – a passageway that links the Mount Kenya ecosystem, Lewa, and Ngare Ndare with the northern Kenya’s plains.

What makes Lewa unique is their long-term commitment to partnering with their neighbours to care for the delicate ecosystem on which we all depend.

To local people, Lewa represents much more than the wildlife it protects. Lewa provides neighbouring pastoral communities an opportunity to maintain their traditional way of life in a modern and sustainable context through progressive and innovative livelihood initiatives.

Lewa benefits thousands of children in local schools by opening doors to a future with more possibilities than those available to their parents and grandparents.

In 2013, Lewa removed the fence separating their conservancy from that of their western neighbour, Borana Conservancy. This unprecedented move between two privately-owned and run properties has created a thriving, 93,000 acre ecosystem dedicated to the protection and care of both endangered and abundant species.

Stay at the gorgeous Lewa Wilderness Lodge, a family owned homestead based on the Laikipia plateau, where one can game view on foot, by open vehicle, on horseback and by camel.

Contact me or one of our Africa specialists to discuss Lewa, Kenya or conservation safaris in more detail.