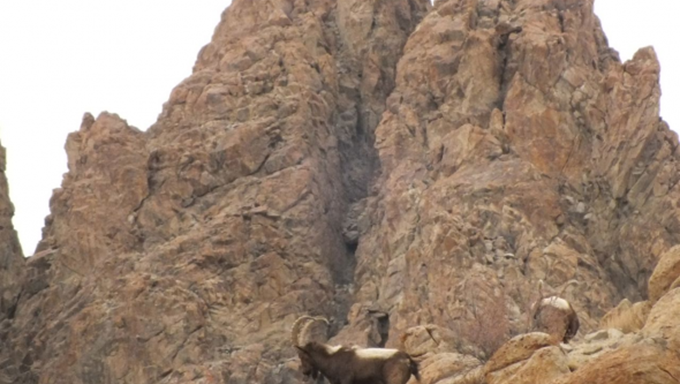 The fox fills the telescope. We watch from about 200 yards as it tugs and worries at the carcass of a young dzo – a cross between a cow and yak – that had been killed by wolves a day earlier. The wolves have feasted on the hindquarters but enough remains for several more meals.

The fox is a handsome subspecies of the red fox – pale gold with creamy shoulders and cream tip to his luxuriant brush. I am watching him from a small terraced field that belongs to Tsewang Norbu – master snow leopard tracker and owner of the Norbu Homestay in the tiny 7-house village of Ulley in the district of Ladakh – snuggled at the head of a dramatic valley at just above 13000 feet.

Except for the willow and caragana and rose in the valley floor, interspersed with a few stands of poplar, little seems to grow here until closer inspection reveals scrubby grasses and tufted plants growing in enough profusion to support the local livestock and a group of about 30 Ibex that have been in sight ever since I arrived. This is a landscape of inhuman scale – stripped to the bone; tortured rock rising to fanged ridge lines that offer the perfect stage for Ibex to pose dramatically against the sky-line and as it turns out – even for wolves.

We have been watching a group of 6 adult Ibex rams drift across the nearer western hill-side. Short-legged and stocky, the males carry a magnificent head of curving ridged horns the number of which reveal the age of the individual. Dark brown coats are off-set by handsome cream coloured ‘saddles’ and the classic goats beard.

In these parts the Ibex is an important prey species for the snow-leopard and the wolf. Something seems to spook them and they rapidly disappear over the ridge. I notice that Norbu and his two sons are scanning the slopes much more intently and suddenly high on the slope is the unmistakable silhouette of a wolf. Talk about drama! And then there are two of them and finally four full-grown animals. In broad daylight they lope down the rock and screed covered slope. The fox has frozen still and only the magpies continue to feed on whatever they can reach.

The wolves move like well-trained infantry – in short rushes and never as a group. One darker animal is well in front and as he cautiously approaches the kill the fox disappears but surprisingly the wolves remain extremely wary and retreat up the hill. For the rest of the afternoon we watch them emerge occasionally and it is clear that they are waiting for darkness. In the meantime the fox makes merry until he is chased off by a huge Himalayan Griffon Vulture.

And the as the Sun edges past the western ridges, the wolves mount their most memorable performance. One of them climbs onto a rock and stands surveying the entire valley and all of us instantly think of the Council Rock in the Jungle Book! The other three line the ridge create a tableau of dramatic silhouettes. 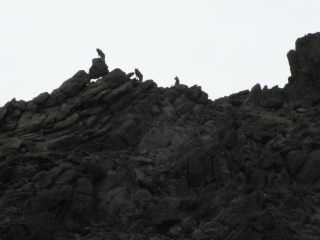 Over the next few minutes we are treated to them interacting, climbing onto the rock and posing in various photogenic attitudes. It is as if they are performing for the camera. The only thing missing is the howling. And then, as darkness deepens the wolves descend and for the next hour, with the help first of a powerful searchlight and then the light of the full moon we watch the wolves on the kill. It is hard to imagine a more exciting end to our day.

It is experiences like this that make Ulley the perfect location for our snow leopard trips. There is no one else here and the exclusivity, the wealth of other wildlife – wolf, fox, Ibex, Ladakhi Urial (a beautiful and large wild sheep – and a wealth of birds in addition to snow leopards adds much greater depth and interest to the entire experience. As does the fact that you stay in a local home, in reasonable comfort and interact with local people.