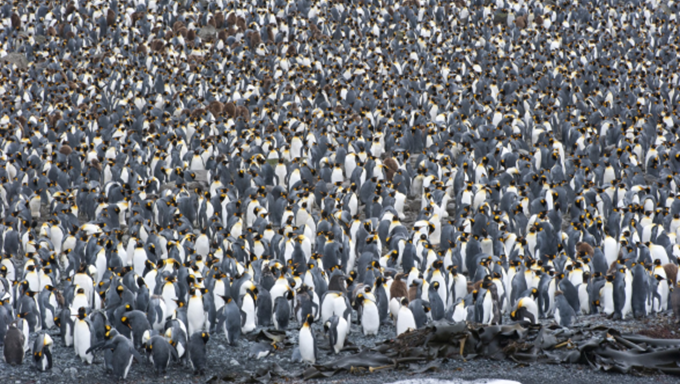 Emperors mate for life and return each year to the same site to lay their eggs and hatch their young, although their path to the breeding grounds is usually different as the sea ice shifts each year and lays obstacles in their way. The females, having made this arduous journey, lay their eggs and then return to the sea to feed through the winter months.

They pass the eggs to their faithful male partners to incubate through the brutal and permanently dark Antarctic winter, protecting them from temperatures of -40C and winds of 100mph by staying in the huddle and taking it in turns to shelter in the middle.

As the eggs hatch and the sun begins to show itself again, the females return back inland across the same journey to feed their new young chicks while the males take their turn to head back out to sea to feed as both partners do several times over the next few months until finally the chicks are ready to head out to sea themselves. Trips usually depart around late November to early December as there is the most light and best weather conditions.

How? We’ll fly you from southern Chile by private jet to your base camp – a surprisingly comfortable camp with spacious tents and a dining hall – it only operates during Antarctic summer from Nov – Jan and is dismantled each autumn. Then fly by ski aircraft to the Weddell Sea Coast to the Emperor Penguin field camp – more basic with polar condition tents and more basic meals but sleeping right amidst the penguins and their chicks! It doesn’t get better than this!

Where are the other great migrations in South America? >