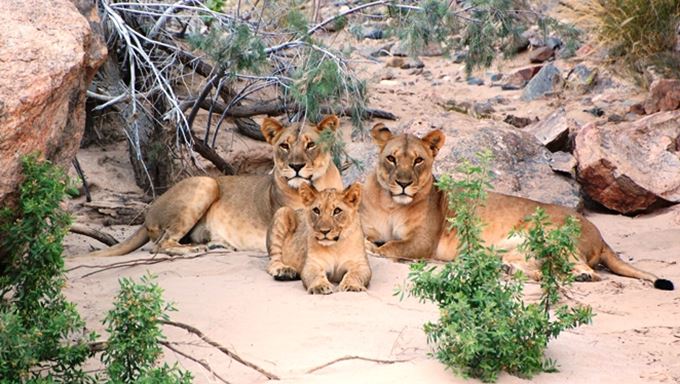 In a merciless, desolate furnace, an unexpected predator endures. Equipped with exceptional survival skills, desert lions roam the Namib. But with so few remaining adult males the small population is on the brink of extinction. A brotherhood of five youngsters, known as the ‘Musketeers’, held the key to the future of their kind.

A few years ago, an old female and her two daughters gave birth to a cohort of five male cubs and, despite the hardships of the desert, they managed to raise them successfully. But soon the time came for the five Musketeers to continue their lives independently when their mothers began their search for one of the last remaining adult males. Faced with many unexpected challenges, the five young males needed to conquer the oldest desert on Earth on their truly epic journey to adulthood.

An old female known as ‘the Queen’ led the pride. At the time she was 17, and was the oldest lioness alive in this harsh wilderness. Together with her daughters, she taught the five young brothers how to live, how to hunt and how to rule a kingdom of sand, sun and dust. But when the seasons change, life in the desert becomes ever more relentless and inevitably takes a heavy toll.

Rain in the desert is extremely rare, but when it does fall, greenery explodes everywhere albeit for a short period. For species such as giraffe, springbok and oryx, it’s paradise. But as they spread out far and wide across the vast desert, the lions are left bereft of prey. It’s not drought that makes life harder for the lions, but the unexpected rains, when hunting gets more difficult and the risks taken are much greater…

Lion researcher Dr. Flip Stander has studied the small population of desert lions for two decades. He has collared the lions and uses sophisticated satellite tracking technology. His lifelong devotion reveals an astonishing narrative of hardship and triumph.

He knew that the lions faced even more dangers on the horizon apart from the already ruthless demands of the desert. Local villagers, poachers and hunters posed a threat to their survival. As a result, the adult male lions have diminished by an alarming rate. Without them, prides will fall apart and desert lions will vanish before our very eyes… More than ever, the five Musketeers’ survival was crucial.

As the five Musketeers were followed on their journey to adulthood, the desert brought out their true enduring spirit. If the five young males succeeded, they would be at the vanguard of the survival of their lion-kind.

It’s an intensely personal story of a pride that plays a crucial role in the prosperity of their population. It’s about the power of a pride, about family bonds, adventure and survival.

The experiences of the desert lions’ lives are extraordinary. Vanishing Kings will show you just how extraordinary they can be.

Please contact us if you are inspired by their journey and would like to know what subsequently happened to the five ''Musketeers''.

This film was produced by Into Nature Productions, Interspot Film and Boksdocs for ORF, Smithsonian Channel and Arte.