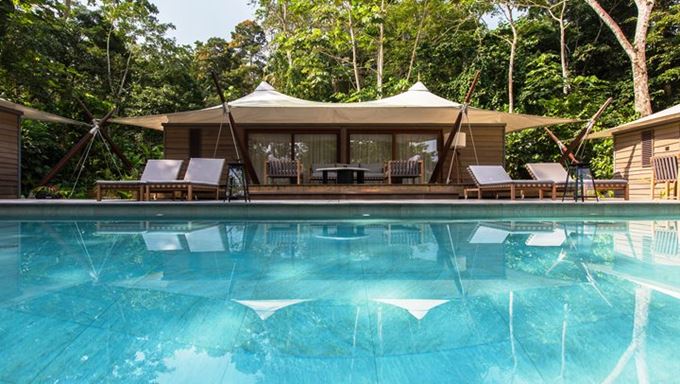 These two idyllic islands are often called the ‘African Galápagos’ due to the high number of endemic birds present in such a small area, these islands offer a rare glimpse into the natural world stood still for hundreds of years.

This little-known corner of the world is home to at least 25 endemic bird species, along with many of the West African mainland specialities. Besides being a birders’ paradise, they also host a small number of endemic reptiles, amphibians and several plants!

São Tomé and Príncipe gained independence from Portugal in 1975, having once been home to a vast network of plantations and a centre of global cocoa production.

São Tomé is the larger of the two islands, home to the capital (São Tomé) and main airport. A daily flight connects the smaller island of Príncipe, which is often referred to as ‘The Galapagos of Africa’.

On Príncipe in particular, an island of just 7,000 inhabitants, there are unspoilt beaches, jungles to explore, colourful culture and a myriad wildlife –all making it a delight for ecotourists.

Príncipe is part of the World Network of Biosphere Reserves, a global programme designed to foster the conservation of biological and cultural diversity, promoting economic and social development.

Confusingly, São Tomé is actually the capital of both the islands (São Tomé and Príncipe). It can be an interesting place to spend a day or two learning about its Portuguese colonial history – the capital was first the centre for the Atlantic slave trade, and then was a hugely productive spot for coffee and cocoa cultivation. Today, the locals are relaxed and friendly, adding a huge amount of charisma of visiting the country that time forgot.

Where is São Tomé and Príncipe located?

São Tomé and Príncipe are located off the West coast of Africa, with its closest mainland countries being Gambon for the bigger São Tomé Island, and Equatorial Guinea for Príncipe Island. The Islands are around 140km apart from each other and are located around 225km off the coastline in the Gulf of Guinea.

When to visit São Tomé and Príncipe

São Tomé and Príncipe lie on the Equator and as such have a warm and humid climate virtually all year round.

Temperatures average between 23°C and 30°C throughout the year, with cooler temperatures in the mountainous interior.

A rainy season runs between October and May, with April and November traditionally the wettest months.

May and October are often seen as the best times to visit weather-wise, while those visiting between July and October have the best chances of seeing migratory humpback whales.

Why go on a São Tomé and Príncipe holiday?

Activities to be enjoyed in São Tomé and Príncipe range from whale & bird watching, to hikes, to scuba diving or simply sauntering around a fishing village enjoying the local bustle of island life.

Why is Eco tourism on São Tomé and Príncipe so important?

Eco tourism at its finest: The only few lodges where you can stay on the islands completely revolve around and pride themselves on eco-tourism, and here, unlike many other destinations, you can truly educate yourself on & immerse yourself in the conservation projects on the island