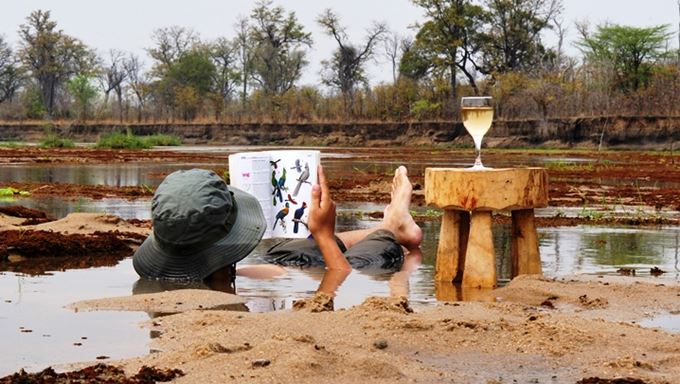 Kafue National Park, the largest and oldest park in Zambia, is one of the last great expanses of remote and unspoiled wilderness in Africa. 22,400 square kilometres of pristine African bush to explore in open 4x4 game vehicles, by boat on the mighty Kafue River or using your own two feet in the form of walking safaris.

40% of all of Africa's water flows through Zambia and the Kafue River - the major lifeline of this park - is one of the largest rivers in the country. This unexplored gem of a park is enticing for its incredible diversity of wildlife and its sheer quantity of big game.

On the big game front, lion, leopard, elephant and buffalo are all prominent. Further to this, Kafue boasts the highest population of wild dog in Africa and the greatest diversity of antelope in the world including the much revered roan and sable antelopes.
The diversity of habitat makes Kafue one of the best locations in Africa for birding. The Kafue riverbanks, wetlands, savannah and woodland boast an impressive 478 of Zambia's 733-recorded bird species. Among them African Wattled and Crowned Crane, Fish Eagle, Woolly-Necked Stork, Saddle Billed Stork, Goliath Heron, Ground Hornbill, African Fin Foot, Pel's Fishing Owl, Purple-Crested Lourie and Chaplin's Barbet.

All over the national park, the consistent Kafue River flows trailing a well-articulated course and its deviates and widens is areas where rocks seem harder and renders the flowing process impossible to go through them. The park has a wide array of activities that you can embark on, some of which include game drives, birding, canoeing, nature walks and fishing.

The game drives at Kafue National Park are quite unique and it guarantees you amazing experiences of getting to mingle with the parks major constituents i.e. wildlife/wild game and nature to mention but a few. The game drives in the park sees you in the plains in search for elephants some of the frequently seen park residents, lechwe, pukus, antelopes, zebras, buffaloes, lions, leopards, spotted hyenas, wild dogs, wildebeests, defassa, hippos, crocodiles, cheetahs and many more.
In addition you will also be to see the amazing view of the park including the plains, the rivers and the forests. All of the game drives arranged by The Explorations Company are conducted by the very best and expert safari guides who have the local knowledge and skills required to track and find the best game.

Kafue National Park has over time transformed into a bird watchers paradise. It is at the top of Zambia’s birding destination for most birding enthusiasts. Every day you will be surprised by wide array of birds that flock to the park. Some of the notable bird species which are likely to swing by your lodge site include the Shallows Turaco usually sighted on the sycamore figs, a few green pigeons often seen flying in numbers, Malachite kingfisher, African darter, wattle crane , elusive Chaplin’s barbet, endemic black-cheeked lovebird, Brown-headed apalis, among many others.
Kafue National Parks bird species have been recorded at up to 480 species and all sighted in various places including forests, rivers, wetlands, woodlands and flood plains.

When is the best time for Bird Watching in Kafue National Park?

The best time for birding is during the wet, summer months. These months run from November to April. During this time a huge number of bird species are breeding.

Canoeing is another amazing activity at Kafue National Park. It’s one of the best ways of exploring the park and the environment shared with crocodiles and hippos. You will also be to gently glide past the elephants and buffaloes at the shoreline of the river undetected.
The Kafue River acts as a water point for multiple wildlife to cool off from the long hot days roaming and grazing in the park, so they tend to head to the river to drink water and take a cleansing dip. Some of the notable wildlife commonly sighted at the banks are elephants, buffaloes, crocodiles, hippos and many more. Canoeing also offers opportunities for birders to watch certain species i.e. the wetland species and the river species usually busk in the in open to capture the sun and as well enjoy drink at river.

You can encounter a whole new experience of Kafue National Park, on a walking safari. The walking safaris enable one to escape from the regular mode of viewing wildlife (game drives) and usher s them into a different arena (walking to view game), conducted by skilled and professional guides.
There is nothing as rewarding as experiencing the African wilderness on foot viewing wildlife in their natural habitats.
There is a distinction between experiencing the African wilderness on walking safaris and through regular game drives. While on a walking safari, you are as one with nature and immersed into the wild, you will follow the same tracks as the wildlife, listens to the whispers, smells, roars and generally the sound of the wilderness in a more pronounced way without any interference.
As you hike into the wild, most of the familiar sounds that usher you will be of the birds. Walking safaris at Kafue is also ideal for the birding enthusiasts and you will encounter birds from all habitats such as in the woods, savanna birds, birds in wetlands, rivers etc.
If you have a particular species you are interested in then your expert guides will be able to track and locate it i.e. tracking an elephant bull on foot can be an amazing experience while on a walking safari as compared to game drive. Walking safaris also enable you the opportunity to see small things that you may not have seen while on a game drive.

When is the best time to visit Kafue National Park?

Temperature-wise Kafue National Park is superbly warm because of its elevation, averaging 1100m above sea level; it is normally cooler when compared with the Luangwa or Zambezi valley’s in October and November however the Kafue can go below zero in winter (June-August) in a few regions.
The dry season generally runs from June to October, while some areas can be difficult to reach during the wetter long periods of November through to April.