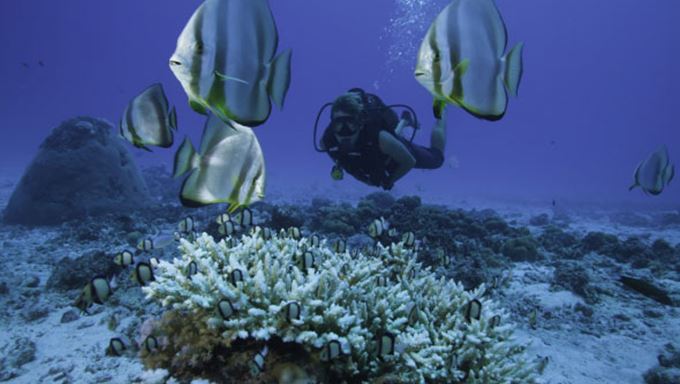 With six national marine reserves, The Seychelles are incredibly blessed with a year long tropical climate and can boast a long list of land and water based activities that will in no doubt leave you in awe and most definitely in love with these stunningly beautiful islands.

Although there is much to see and do in the Seychelles, there is nothing more alluring than the gin-clear water that surrounds the islands in which to explore the phenomenal underwater life that dwells amongst the expansive reefs, drop-offs, pinnacles, wrecks and canyons and which make for one of the most diverse marine environments, teeming with both fish and coral life.

Although it is possible to dive throughout the year in the Seychelles – the waters are at their calmest during the months of March, April and May and then again in September, October and November. These are the months when the visibility can reach a staggering 30m and with waters reaching temperatures of 29⁰C it makes for a very pleasant and relaxed diving and snorkelling experience.

Even though during the months of June, July and August the south-east monsoon brings stronger winds and cooler seas, these months offer a superb viewing window for whale sharks due to the increase of nutrient rich plankton which draws these magnificent creatures to these waters.

Although the visibility may be significantly reduced due to the plankton’s arrival, swimming with one of these gentle giants will open your eyes in more ways than one and at an incredible 10m in length – they would be hard to miss!

The Seychelles has no fewer than six national marine reserves, many of which are protected by the Marine Parks Authority and around the inner reefs you can expect to see among others – angelfish, butterfly fish, octopus, lionfish, nudibranchs and mantis shrimp.

For anyone who is not a diver and is happy to sport goggles and fins and stay closer to the sanctity of the shore, the snorkelling off the hotel beaches and around the marine parks of Mahé and Praslin will leave you just as enthralled as those out in the big wide ocean.

The outer islands such as Desroches, Denis Island, and North Island etc offer you a somewhat more private diving or snorkelling experience due to the hotels / resorts being the only occupants on the islands therefore with fewer guests than the bigger hotels on the main islands.