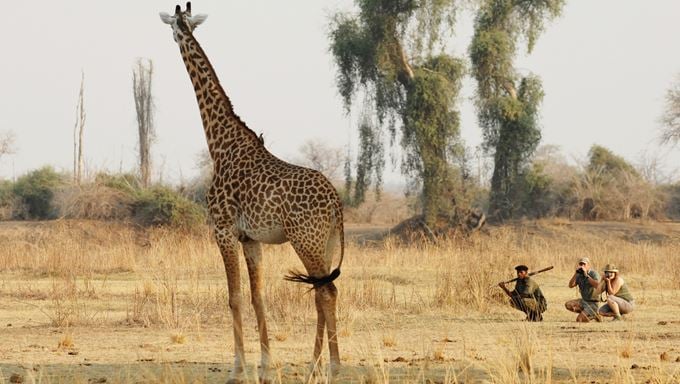 In South Luangwa National Park, Zambia: The walking season is June-October. One can either join a set departure or have a Zambia walking safari tailored around just your party. One normally spends the first couple of nights at a comfortable and stylish tented camp in south Luangwa, where the order of the day is game-drives during the day and night, followed by a 5-night walking safari between three mobile camps which are set up for you.

The whole emphasis is on walking. This is no route march – perhaps 10kms maximum will be covered in an entire day over generally flat ground. This is one of the best ways of going on safari as one learns so much – not only about the wildlife, but also the trees, plants, insects and birdlife. No more than six people are taken walking at a time and one develops a close rapport with one’s guide. Two or three nights are then spent at a luxury, tented camp at the end.

Another option is to stay at an owner-managed lodge in the south Luangwa, which is renowned for some of the finest guides in Africa. This is one of our individual, bespoke safaris. One views game on foot and by open vehicle (and also microlight, should one wish!). This is an amazing experience before continuing your Zambia walking safari, staying perhaps two nights at one bush camp and then a couple of nights at a further bush camp. This is entirely dependent upon your own wishes and timetable.

The south Luangwa National Park is a veritable treasure trove of abundant wildlife which is concentrated around the Luangwa River and its oxbow lagoons. Its 9025 square kilometres boast one of the highest concentrations of leopard in southern Africa and it is also home to the endemic Thornicroft's giraffe. The elephant population is healthy, as is the hippo population. The birdlife is equally rewarding, with over 400 species recorded in the area. The walking safaris are conducted by extremely knowledgeable conservationists and guides, with a focus firmly on the wildlife and surrounding environment.

For somebody looking for an authentic walking safari, where one can walk from one private, mobile tented camp to another, then this is the only safari that exists of its kind. Sleeping in a tent is simply wonderful, as the the night sounds are so much closer and clearer through the gauze windows. Secondly, the breeze wafts gently through and the smells of the plants and wild herbs with the morning dew really make you feel alive.

This is one of the best walking safaris in Africa, especially if one wants to combine other parts of the country with the Luangwa.