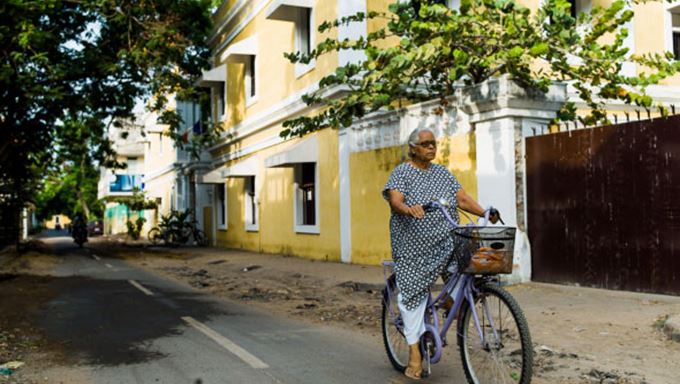 For most people, images of European imperialism in South Asia are inextricably bound up with the poetry of Kipling and the pomp of the British Raj. Few people by contrast are familiar with the former French Indian Territories, administered from the sleepy colonial enclave of Pondicherry until their return to India in 1954.

The Compagnie des Indes, the French equivalent of the British East India Company, was established in Paris with the blessing of King Louis XIV in 1644. Thirty years later in 1674, its representatives acquired the territory around Putucéri from a local Tamil ruler and set about establishing a French trading post which they renamed Pondicherry. 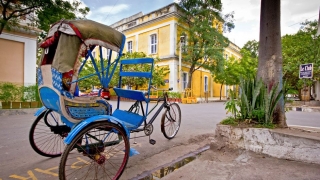 Over the next century this enterprise enjoyed mixed fortunes. For four years between 1693 and 1697, the post was occupied by the Dutch who endowed it with strong fortifications before handing it back to the French in a peace settlement.

Such invidious distinctions have long since been swept away, but the former Ville Blanche remains the heart of old Pondi. Here the finest colonial buildings, the cleanest, quietest streets and the most distinguished compounds are set against an almost Mediterranean sea front. 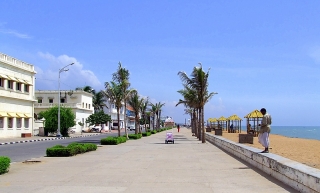 Even today, forty years after the Tricolour was lowered for the last time, Pondi remains redolent of France, with many streets still retaining their French names. Some recall famous generals — Rue Suffren and Rue Mahé de La Bourdonnais, for example. Others celebrate literary figures, such as Rue Alexandre Dumas or politicians like Rue St Martin.

The seafront is certainly the best place to start any exploration of Pondi. Viewed from here, the city's twin cultural heritage is immediately apparent. At the north end of the esplanade stand the French Institute and Consulate-General, whilst the south end terminates in the Alliance Francaise, all housed in fine old colonial buildings.

Immediately behind lies the former French Place, today renamed Government Square — the heart of colonial Pondi dominated by the Raj Nivas. This two hundred year old building, perhaps the finest surviving example of Indo-French architecture, was once the residence of the redoubtable Marquis Dupleix and today houses the Lieutenant-Governor of Pondicherry.

Nearby are other fascinating reminders of the past. These include the Romain Rolland Library, which holds more than 60,000 volumes on its shelves, many of which are old and rare. Pondicherry Museum functions as an adjunct to the library and is well worth a visit, housing a remarkable collection of artefacts from all parts of former French India.

The remainder of the Ville Blanche can best be divided into northern and southern sectors. To the north lies the Sri Aurobindo Ashram and to the south, easily identified by its striking square towers, stands Notre Dame des Anges. Hanging within this church which was built in 1865, is a rare oil painting of Our Lady of the Assumption presented by Emperor Napoleon III. Nearby, in a little garden off Rue Dumas, is a statue of the French heroine Joan of Arc, burned at the stake by the English in 1431. 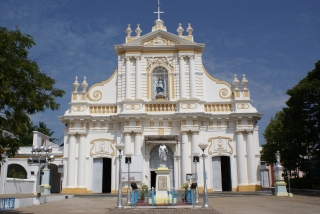 The former Ville Noire, lying to the west of the canal, may also be conveniently divided into northern and southern sectors. To the north is the most Indian part of Pondicherry. Here the air is filled with the scent of spices, the familiar aroma of Indian cuisine, and the warm, rolling vowels of Tamil speech.

Opposite the Grand Bazaar is the house of Ananda Ranga Pillai which is well worth a visit. This eminent Indian, who was Dupleix's trusted confidant and trading agent, enjoyed great wealth and power during his long life. He also left his remarkable house, which has now been converted into a museum. This graceful building, filled with fine period furnishings and decorations, is an exquisite example of Franco-Indian architectural design, successfully blending elements of both traditions into a single whole. 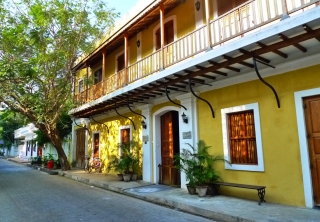 The southern section of the former Ville Noire is more Christian and Muslim in nature that the Tamil-Hindu north. Here, appropriately enough on Cathedral Street rise the twin spires of Pondicherry Cathedral.

Further south still, on Mulia Street, the minarets of the Kuthpa Mosque indicate that Tamil Muslims, known locally as Labbais, also contribute to the ethnic mosaic of Pondicherry. Near the mosque are halal restaurants and bookshops selling Qur'ans and Islamic prayer caps. 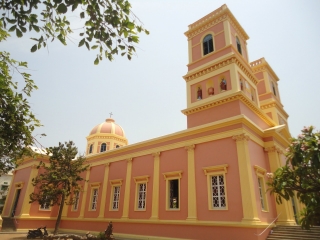 Finally, at the southern edge of town by Ramaraja Street, may be found the third of Pondi's distinguished old colonial churches, The Church of the Sacred Heart of Jesus. Gothic in style and serene in atmosphere, it boasts some fine stained glass and an elegant stucco facade. In the nearby cemetery elaborately carved headstones mark the final resting-place of early French settlers 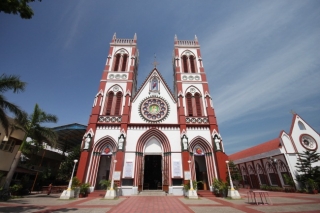 As the sun sets over the distant Eastern Ghats, it illuminates an unexpectedly evocative scene. In the not-too-distant future, India's tourist authority is likely to promote Pondi as a cultural destination. For the moment however, the enclave remains a delightful and fascinating backwater which is sure to appeal to the discerning traveller.