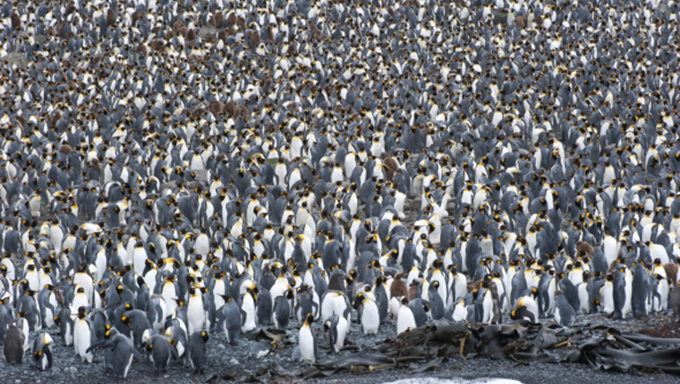 Emperor Penguins - Antarctica: Emperors mate for life and return each year to the same site to lay their eggs and hatch their young, although their path to the breeding grounds is usually different as the sea ice shifts each year and lays obstacles in their way. The females, having made this arduous journey, lay their eggs and then return to the sea to feed through the winter months. They pass the eggs to their faithful male partners to incubate through the brutal and permanently dark Antarctic winter, protecting them from temperatures of -40C and winds of 100mph by staying in the huddle and taking it in turns to shelter in the middle. As the eggs hatch and the sun begins to show itself again, the females return back inland across the same journey to feed their new young chicks while the males take their turn to head back out to sea to feed as both partners do several times over the next few months until finally the chicks are ready to head out to sea themselves. Trips usually depart around late November to early December as there is the most light and best weather conditions.

How? We’ll fly you from southern Chile by private jet to your base camp – a surprisingly comfortable camp with spacious tents and a dining hall – it only operates during Antarctic summer from Nov – Jan and is dismantled each autumn. Then fly by ski aircraft to the Weddell Sea Coast to the Emperor Penguin field camp – more basic with polar condition tents and more basic meals but sleeping right amidst the penguins and their chicks! It doesn’t get better than this!

WHERE ELSE IN SOUTH AMERICA AND THE POLAR REGIONS?

Arctic and Antarctic Polar Regions - The Arctic Tern - The tiny Arctic tern is known to take one of the longest migrations, spanning as many as 44,000 miles annually, zigzagging between the Arctic and Antarctic. Sooty shearwaters undertake a similar journey.

Antarctica/Chile and Argentina- Southern elephant seals undertake a 20 000 km migration and breed between September and November. Between times, they migrate to Antarctica to feed. As well as vast populations in Antarctica and the southern ocean islands, these incredible creatures may be found in colonies around the fjords of the beagle Channel in southern Chile as well as along the coast of the dramatic Peninsula Valdes on Argentina’s Atlantic Coast. August to April.

Mexico - Whale sharks off Mexico's Yucatan peninsula follow climatic patterns that sustain their supply of food and water. They travel to warmer waters to give birth. They attract more whale sharks than any other spot worldwide for its rich sources of marine food that keep them going for much of the rest of the year. June and September are the best months and it is possible to swim amongst these gentle giants, especially from the smaller quite little island retreats away from Cancun such as Isla Mujeres and Isla Holbox.

Costa Rica - green sea turtles travel vast distances each year, returning to their ancestral breeding grounds. These magnificent creatures migrate en masse not only because of their communal instincts, but because it provides safety from predators. The protected beaches see hundreds of turtles coming up the beach to lay their eggs between July and October with the hatchlings starting to emerge from September to December.

Mexico – Monarch Butterflies– migrate on an extraordinary journey for up to 3,000 miles from Canada to the forests of Central Mexico, congregating in their millions during January to March, peaking in February around Angangueo which has several protected reserves where you can see them. More extraordinary is that no one butterfly makes the return journey as the adult butterfly lives for only 4-5 weeks. It is an instinctive migration through numerous generations but returning to the same place each year. Popular is the Butterfly cultural festival at the end of February when it is a very popular time to visit.

Costa Rica - Humpback Whales: The humpback whale migration is one of the most remarkable journeys by any creature on the planet. These whales travel further than any other species to reach their breeding grounds, often more than 5,000 miles each way, which is the longest recorded migratory journey by any individual mammal. They travel from their feeding grounds in Antarctica to northern tropical waters around Costa Rica in order to give birth to their young, arriving on the Pacific Coast of Central America between June and October. In turn their northern counterparts also journey vast distances from the Arctic to arrive in December – April making this location unique in the world for being witness to two separate and magnificent migrations.