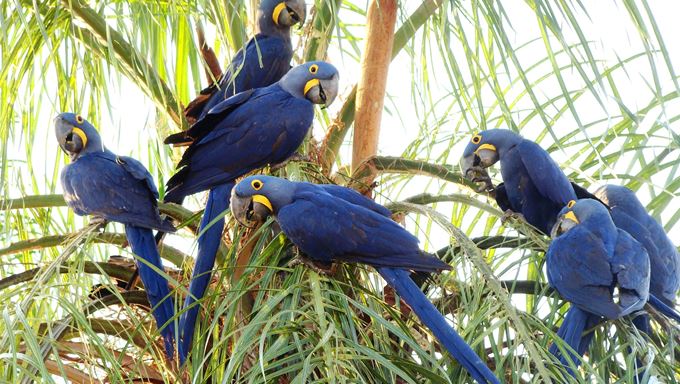 Perhaps one of the most coveted regions to journey to for some truly unique wildlife, entwined with some jaw-dropping and uninhabited landscapes is Antarctica. The most accessible point to the Antarctic Peninsula is the southernmost tip of the South American mainland, from which you can voyage to the southernmost continent and explore vast colonies of penguins, seals and seabirds as well as looking out for many species of cetaceans.

For those who want to see the largest species of penguins such as King or Emperor penguins can spot vast colonies of these endearing creatures on South Georgia or by taking a helicopter or flight into the remote interior, which remains one of the most awe-inspiring spectacles you will ever witness.

The Galápagos archipelago is, of course, one of the world’s best loved wildlife destinations, and rightly so. The unique species of mammals and birds here have adapted independently to the environments and conditions of each island in the archipelago, creating the most fascinating outdoor classroom for exploring the processes of evolution.

Equally fascinating are the Pantanal in Brazil and Ibera in Argentina, vast regions of sub-tropical wetlands and savannah teeming with exotic birdlife, as well as some most unusual mammals, such as armadillos, anteaters and capybara, the largest rodent on Earth. For some, the attraction to these remote lands will be the very excellent opportunities to spot the mysterious and elusive jaguar during the dry season, from simple river boats.

These may be the most well-known wildlife stars of the continent but are by no means the only stars. For an unparalleled marine spectacle, head to Mexico’s Sea of Cortez to come up-close to huge whales or swim amongst giant whale sharks off the Yucatan Peninsula. Head into the high Andes that form the backbone of the continent to look for rare coral coloured flamingos that gather on salt lakes, where herds of came-lids such as vicuna, alpaca and llama graze.

And of course there is the vast Amazon rainforest, haven to one of the world’s most important bio-diverse climates and spanning huge swathes of territory across Brazil, Venezuela, Guyana, Colombia, Ecuador and Peru. The Amazon River itself is home to a unique species of pink river dolphins and the rainforest still offers habitat to an enormous variety of reptiles, amphibians, insects, birds and mammals – the remoter the location the better the chances of spotting these fascinating creatures, either by day or by night.

Let us know what you have a hankering to see up close and we will give you our insider tips on the best chances to see these magnificent creatures, where to go and which guide to take with you.