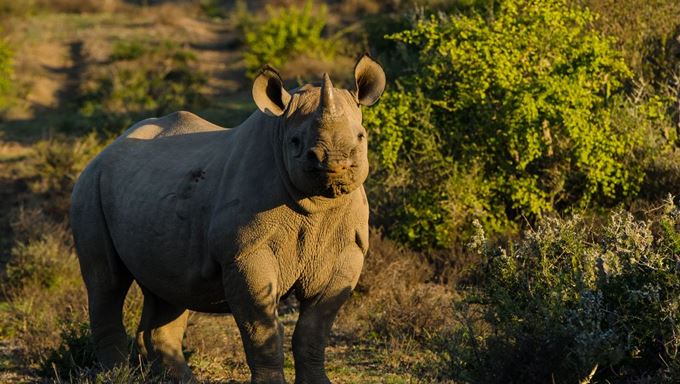 Did you know that rhino horn is made up from the same substance as your fingernails but nonetheless people pay thousands for the horn? This sadly means that thousands of rhinos die every year, and people die too trying to protect them.

I have just returned from the most fantastic experience in Kwandwe, South Africa, where I was part of a team who tracked and darted a rhino mother and baby. We helped to notch the rhinos' ears and then tracking chips were put into their horns, before a vet woke them up again. Being so close to these gentle creatures and having such a direct involvement with their conservation was a truly privileged and humbling experience.

Your safari can also help to save the rhino too, as there are various fabulous ongoing projects for rhino conservation in Africa. The following are my favourite places that I really recommend if you want to see the endangered rhino, and in doing so make a real contribution to their conservation.

Kwandwe in South Africa currently supports a healthy, increasing population of rhino and notably of the highly endangered black rhino since its successful introduction to the reserve in 2000.

The succulent thicket of Kwandwe provides black rhino with the perfect nutrition and it is in this type of vegetation that their reproduction is at the highest level in Africa.

The Great Fish River Game Reserve neighbouring Kwandwe also has the third most important population of black rhino in Southern Africa, demonstrating the importance of this region in black rhino conservation.

The best time of year to do the rhino conservation safari is general from the beginning of May to the end of September, due to cooler weather conditions, however it can be done all year.

Set in the heart of South Africa’s scenic Eastern Cape Province, the 22,000 hectares (54 000 acres) Kwandwe Private Game Reserve offers guests the exclusive opportunity to help preserve threatened species on a Rhino Conservation Safari. Kwandwe is also home to the famous Big 5 as well as a diverse number of more unusual and smaller species.

Thousands of animals including black and white rhino, lion, buffalo, elephant and cheetah roam these extensive plains. The Reserve is also a sanctuary to various other endangered species. Guests can participate in the rhino notching, darting, and DNA sampling process all of which play a key role for conservation purposes.

The trip also provides a thrilling understanding of Kwandwe’s white and black rhinos and their differing behavioural patterns. A group of up to eight guests undergo a full briefing and are all allocated explicit roles before accompanying Angus Sholto-Douglas, who is the MD and conversation manager, plus a wildlife vet to explore the reserve and to spot the rhino.

Once the rhino is darted and sedated, participants join the specialist ranger team on the ground and play their role in administering any further medication, taking measurements for medical and scientific purposes and monitoring the rhino whilst under sedation.

You also have an opportunity to drill the rhino horns for the insertion of microchips and perform ear-notching procedures for future identification – these are both essential tasks to ensure the preservation of these glorious animals.

The implantation of a chip is a vital part of conservation efforts to make the rhino less valuable to poachers and contributes to the Reserve's efforts to conserve this endangered animal. The reserve has been successful since 2000 at supporting a healthy and growing population of both black and white rhino.

I recently attended a fabulous talk at the RGS in London given by the Lewa Wildlife Conservancy and ll Ngwesi about lessons for the future of Africa's wildlife and communities and the great news is that in Lewa, no rhinos have been poached for three years. Rhino conservation, when done well, really can work.

The rhino program began in 1986 when the Craig Family set aside 5,000 acres of land to set up the Ngare Sergoi Rhino Sanctuary. The rhinos flourished and in 1995, the Craig’s turned the whole ranch into a conservancy. Lewa is now considered to have been instrumental in saving the rhino in Kenya!

Lewa has one of the highest wildlife concentrations in Kenya including 14% of the country’s white and critically endangered black rhinos, and the world’s single largest population of Grévy's zebra. It is also the perfect place to spot herds of elephants and buffalo, giraffes, lions, cheetahs, more than 400 species of birds and if very lucky, a pack of wild dogs!

Their rhino breeding program is so successful that they have been able to assist other conservancies and reserves in bolstering their own populations. Lewa has also extended the range for their own rhinos by removing the boundaries between themselves and neighbouring reserve Borana, giving 93,000 acres of prime rhino range-land.

Lewa continues to run one of the most successful rhino protection programs in Africa. Their anti-poaching measures include a team of rangers trained by special military forces and some highly skilled bloodhound tracker dogs who have been used to trace down poachers with accuracy over long distances. Sometimes the tracker dogs are even used in the community to assist with issues such as tracking down stolen cattle.

The Conservancy is very involved in the local community and runs education programs which has helped the locals to see the benefits that conservation brings to them. They have their own healthcare clinic and support four others locally, providing the only access to healthcare for tens of thousands of local people, and help to empower local women to become entrepreneurs with micro-loans and business skills training.

Guests can get involved in conservation here by assisting in the annual Lewa and Borana game census, where the species of game are counted from the air. This is a fantastic way to see their inspiring work and meet, and learn from, the top researchers and conservationists that have been instrumental in the survival of the rhino in Kenya.

Save the Rhino Trust (SRT) is working with local safari operators to save the rhino. Damaraland is home to the largest free-ranging population of black rhino in Africa and you can track them by vehicle or on foot in this immense, breath-taking landscape.

Whilst this does take time and patience, the reward of spotting one of these great creatures is truly worth the wait. Desert Rhino Camp is located on the Palmwag concession which covers 580,000 hectares with uninterrupted views of desert and mountains.

The freshwater springs found on the reserve are one of the reasons why some animals are so successful here. The area is separated into zones and when a rhino has been spotted and viewed in one zone, they are left alone for the day - only one sighting per day of an individual is allowed.

The entire region covers half a million square kilometres and is the single largest natural traversing and free roaming area for the endangered black rhino.

A portion of every bed night spent here automatically goes to SRT, which helps fund their conservation projects. It is important to know that Desert Rhino Camp is a joint venture between Save the Rhino Trust and the company who owns the property; the point being that SRT is responsible for the survival of the rare black rhino in this area.

Activities in camp therefore tend to focus on tracking black rhino, which they usually do once a day. Save The Rhino Trust is run by locally trained people who patrol and monitor the rhino and it is with these trackers, some of whom are seconded to the camp, that you go out.

They tend to go out slightly ahead of you to scout the areas where the rhino are expected to be before your guide drives you out a little later on to appreciate the scenery and other resident game before following the trackers.

The time on foot and vehicle varies depending on where the rhino is. Black rhino tend to be more aggressive than their counterparts so it is not possible to get closer than a hundred metres from them; make sure therefore that you take good binoculars and a camera with a steady zoom.

Depending on how long it takes to find and view the rhino in this huge concession area it’s often the case that you enjoy a drive and some lunch and then you meet up with the rhino trackers.

You’ll then be privy to all the tracker’s notes and sightings and, during a picnic lunch or coffee break, you have the chance to learn more about what they do, how they find the rhinos and where they track them in such a large concession.

Saruni Rhino is located in the Sera Community Conservancy, in the wild, undiscovered northern frontier of Kenya. Saruni Rhino offers the first rhino tracking experience in East Africa and is an amazing walking safari which provides a uniquely thrilling adventure, but also allows guests to actively contribute to the protection of this iconic species.

Sera Conservancy and Saruni Rhino is located amidst swaying doum palms along a sandy ‘lugga’ dry river bed. With your Rhino Tracking Experience you can drive to within a short distance of the endangered black rhino, leaving the vehicle on foot to track the rhino in the safety of a guide and a ranger.

After  an  exhilarating,  ‘up  close  and  personal’ experience,  you will have a game drive back to camp where a lantern-lit bush dinner awaits you in the idyllic setting of the dry river bed, as the night sounds reverberate around you. You can also on a game drive into the Rhino Sanctuary from a different entrance, possibly spotting more rhino on the way from your vehicle.

These organisations make a real difference every day and by participating in their conservation safaris, you can help them to continue protecting this precious species before it is too late. Please feel free to contact me if you would like to discuss a dream safari up close with the magnificent rhino.

Images kindly supplied by and copyright to: 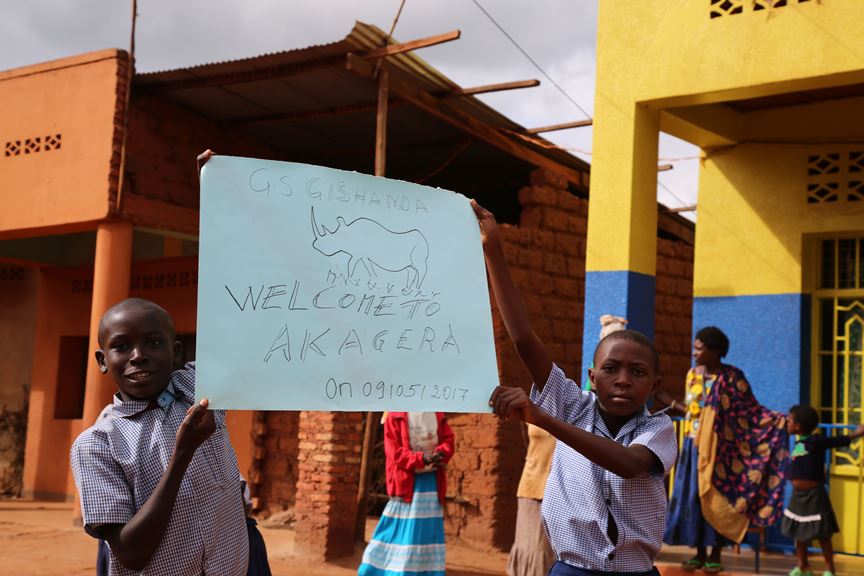 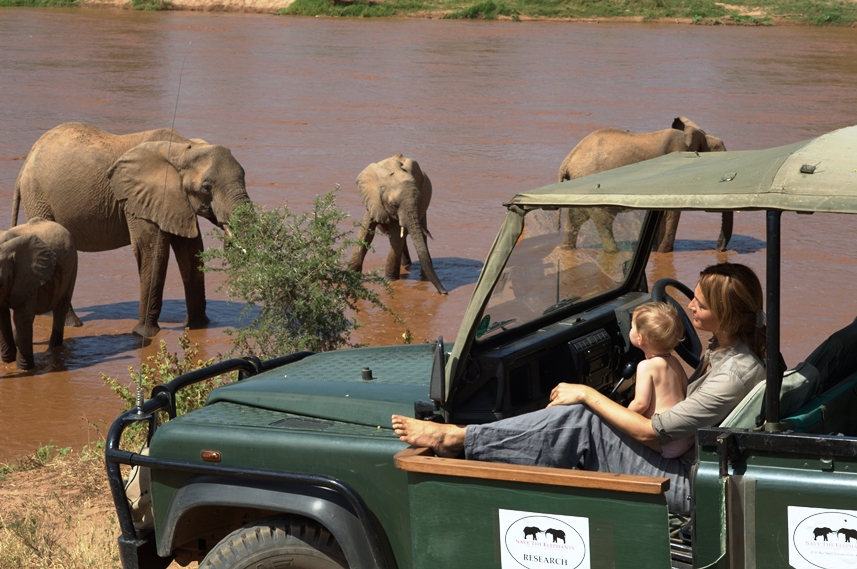