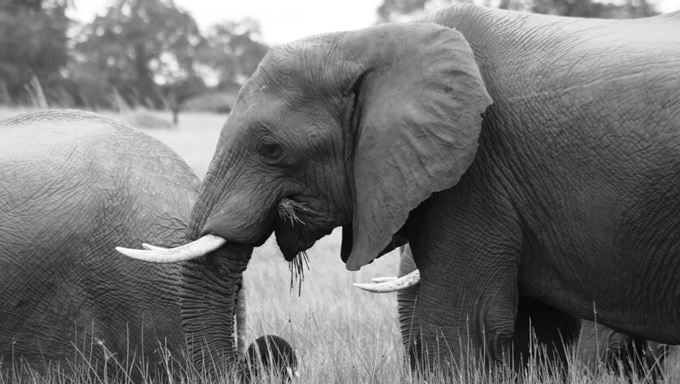 I was honoured to be invited to attend the much-anticipated Illegal Wildlife Trade Conference in London on 11th and 12th October. This conference is the largest of its kind that has ever been held with over one thousand delegates in attendance.

Eighty four countries were represented by various heads of state, ministers, scientists, NGO’s and business people in a holistic effort to address and reduce wildlife criminality worldwide, including ivory smuggling. Often the groups who traffic drugs, people and weapons are also involved in wildlife crime.

From the outset I was impressed by the tangible desire amongst heads of state to tackle this pervasive and highly immediate issue.

Jeremy Hunt, UK Foreign Secretary, introduced Prince William who made a superb speech with an impassioned plea to end the £17.5 billion trade in illegal wildlife products.

How urgent is the problem of the illegal wildlife trade?

Many statistics were frightening: Last year more than 100 rangers were killed on the front line of the fight against poachers. 86 elephant and 3 rhino are killed each day.

Scientists estimate just 415,000 elephants survive in Africa, a huge reduction in numbers due to a poaching crisis that has been driven by rising disposable incomes and demand for luxury goods in East Asia. 20% of the population have been lost in the past decade. Lion populations are down by 50%.

In India and the surrounding regions, tiger populations have reduced by a stunning 95%. But it’s not just the well-documented species that are facing real danger: up to 100,000 pangolins are estimated to be hunted and sold every year, making them the most traded wild animal in the world.

The meat is considered a delicacy in China, Vietnam and other parts of south-east Asia while the scales are prized for traditional medicine. Researchers warned last year that the Chinese pangolin is in danger of being “eaten to extinction” because of huge demand.

Undoubtedly, Homo sapiens is the deadliest species on Planet Earth. Our population soars whilst wildlife numbers dwindle due to human-wildlife conflict as well as poaching and trafficking.

We cannot allow the interests of humanity to be separated from the interests of the natural world and, whilst population issues are a huge concern that needs to be addressed, we must immediately and totally eradicate the market for illegal wildlife products.

What is being done to end the illegal trade?

What are the challenges we face?

The issue is a global one. As markets in China (supposedly) contract following last year’s ban on the sale of ivory in that country, new markets are emerging, such as Vietnam, Korea and Myanmar.

Other problems include corruption and punitive measures either not being stringently administered or simply being insufficient. As an example, in Gabon the killing of an elephant engenders a mere 6 month gaol sentence.

Therefore it was heartening to hear that Vietnam has pledged to be more effective, doubling the sentence from seven to fifteen years. However there is still so much to be done in terms of providing conclusive evidence and intelligence to convict many wildlife criminals.

Where have results already been seen?

There is some good news. As an example: Nepal has had no tiger or elephant poaching in its parks for the last four years!

Conservation efforts really can pay off: elephant numbers are growing in Botswana, which is home to the greatest concentration of elephant in Africa. Part of the successes lie in good policing and anti-corruption initiatives but there is also the hard-fought practical balance between people and wildlife, including measures to avoid direct conflict and establish physical corridors to provide a safe haven for humans and wildlife alike.

Much of this is down to education and finding alternate sources of income for local communities whilst we grapple with the daunting prospect of huge population increases.

So what can we all do?

If you would like to support any of these organisations, please do. The Wildlife Justice Commission is excellent and desperately requires more funding.  There is also the Global Environment Facility and United for Wildlife and the EIA – Environmental Investigation Agency.

The overall message of the conference was simple and follows the basis of tackling many of the planet’s urgent problems: The world can crack down on the illegal trade in wildlife if leaders come together and we work on a unified political and practical theme. Failure is not an option.

My passion is designing life-changing safaris and holidays that directly contribute to philanthropic and conservation causes. Contact me now to discuss how your safari holiday can make a real difference.

Image 4 of elephant copyright to Elephant Watch Camp Kenya, home of Save The Elephants.