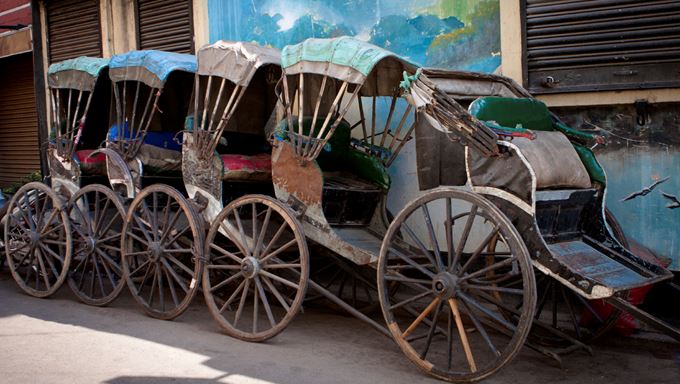 The British have left several things which still revolve around the time and life of Indian’s, whether that be Toy Train of Ooty, Shimla or Darjeeling, trams or the Hand Pulled Rickshaws of Kolkata.

It was 1880 when Hand Pulled Rickshaws were brought to India for first time in Shimla and later on entered Kolkata as well and is still present, though around the world they are fast moving towards being completely phased out.

In Kolkata there are some 18000 Hand Pulled Rickshaw’s, some licenced by the government and some not. Many activists have started raising their voice to remove these rickshaws on the humanitarian grounds, but the rickshaw pullers are adamant and have struck to it and are not even convinced about the rehabilitation schemes given by the government.

You can still explore some of the sights by taking a ride on one of these hand pulled rickshaws that are prevalent only in Calcutta. The rickshaw, no less than a palanquin, tall confident and fast will feel like a camel ride, amidst the sea of cars. On the street of Kolkata, they are constant reminder of the city’s elitist history. However you may not have the heart to ride it for long!

Kolkata, the city of many faces, innumerable emotions and many passions. From this labyrinth emerge several singular expressions which take the uninitiated through a journey of overwhelming experience. No wonder that when these singularities start mingling together we end up having the chaos that is Calcutta, now known as Kolkata.

It may be known for its crowds and if a Hand Pulled Rickshaw is not your cup of tea or preferred mode of transport then on a walking tour, it’s the air of religious diversity that triumphs. Kolkata is one of the most "under-rated" and "under-visited" cities in India and visitors are left marveling at the hidden treasures and unique history the city has to offer.

All walks are utterly bespoke and start early in the morning simply to beat the heat….and the traffic. There is no better time to walk through this vibrant and bustling city.

As the city wakes up, you will witness the passage of humanity from the streets where her people live and work, to the great River Hoogly where they perform their early morning rituals to cleanse and purify themselves. Where better to witness this than in the colourful riverside flower market where all the city's religious flowers originate.

Your journey begins on the banks of the grand Hooghly, where the battles of Europe were fought in the 17th, 18th and 19th centuries. Alongside Armenian and Portuguese churches and Jewish synagogues, you embark upon a journey that takes you in and around Dalhousie Square, the famous Writers' Building - the former HQ of the infamous East India Company, the magnificent Governor's House and the almost forgotten Charnock Mausoleum.

The city has some lovely cafes like the Indian Coffee House. Built in the late 1800s as the Albert Hall to commemorate a visit of the prince consort, it eventually became the city’s most venerable institution of revolutionary chatter and flirt.

The walk then takes you to two great institutions left behind by the British. The almost forgotten Park Cemetery and the majestic Memorial. The Victoria Memorial houses a permanent collection of Art and a well laid out Calcutta Gallery telling the history of the city.

Don’t forget to have lunch at Bengali Restaurant situated in the historic Star Theatre. The food is simple and fresh, with local specialties like Daab Chingri (prawn curry in tender coconut gravy), Bhekti Paturi (a local river fish cooked in mustard and wrapped in a banana leaf), a vegetable made from the flowers of the banana tree and an ice cream dessert made with fresh jaggery from the date palm tree.

Some of the other interesting things to cover while on foot are a visit Kumartuli or the Potters' Market, where giant life-like religious idols are created for the city's numerous festivals out of river clay, bamboo and straw and then adorned with elaborate jewellery and clothes, with beautifully painted features.

Before returning to your hotel take a private boat ride on the River Hooghly before ending up at Flury's Tea Room close to the Oxford Book Shop. If you are in Kolkata during Christmas, visit the St. Pauls’ Cathedral for a carol performance by Dr. Grahams’ Orphanage. Goosebumps guaranteed!!!

Interestingly, the city only had a few hotels that caught our attention however and very recently a new hotel appropriately called The Corner Courtyard has opened doors to guests visiting Kolkata. Known to many as the Chatterjee home, it has been restored as a charming boutique heritage hotel.

Located in the heart of the city, it has seven rooms, each with a theme based on the city’s colours — Vermilion with its Durga Puja imagery; Cadmium Yellow for the yellow Ambassador taxi; Charcoal White for Ray’s black-and-white cinema.

With period furniture and Raj-era letter boxes, the rooms are very attractive with a cheerful, sun-drenched open-air restaurant and patisserie in the centre of the building. Care for a view of twinkling city lights from over the Hooghly? The Corner Courtyard even has a 1949 Land Rover for an unforgettable Kolkata-by-night drive.